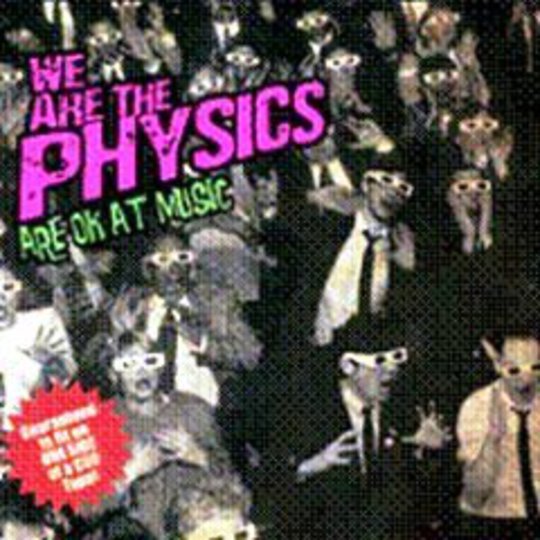 A few years back Sunderland-based post-punk outfit This Aint Vegas released a split seven with Kill Yourself, both tackling tracks penned by Devo; TAV elected to offer forth their spin on ‘Girl U Want’, and the result was an insistent, itchy-pop dancefloor filler, high on energy and feverish of sweat. This model – urgent melodies set to a raucous backbeat – has since been adopted if not adapted by Glasgow four-piece We Are The Physics, whose singles to date have rarely not impressed; live, they’re a phenomenally boisterous bunch whose infectious glee takes no time at all to infiltrate a crowd.

But a whole album of what is – almost – the same song twelve times is a bit much, even for the firmest fan of the foursome. Preceding standalone cuts ‘You Can Do Athletics, BTW’ (a former Single of the Week) and ‘This Is Vanity’ – essential listening on their own – are deafened into an unlikely submission by the surrounding cacophonies, each bursting with frenzied twitch-riffing and hyper-yelped vocal lines. Keeping up is a challenge, tiring for the casual admirer and a dizzying headache for the complete newcomer – as songs fly by it’s sometimes hard to hear where one ends and the next begins. Ears become numbed by the singularly-paced arrangements, everything executed at a million miles per hour, and ultimately your average listener will struggle to play this from start to finish without a refreshing brew. Tea or lager, or something stronger: whatever your poison, you may need it.

Occasionally displaying the huge-hooked commercial pop potential of early Futureheads, We Are The Physics have by no means delivered a poor LP with …Are OK At Music; what they have produced is an entirely one-dimensional debut that will either become a favourite of attention-deficit sorts everywhere or be consigned to whatever shores all those unsold Ikara Colt and KaitO LPs washed up on. For these sensitive ears, battered so many times by bombast any sane individual would flee from, it’s all A Bit Much. But if that kind of excess ticks your boxes – providing you can control your own ticks long enough to keep a pencil steady – best sign up now. 2008 is unlikely to produce another album full of such incredibly OTT beans.