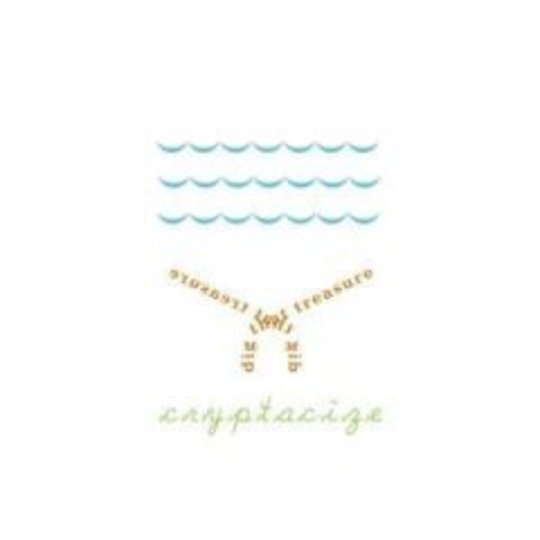 They’re an imaginative bunch, Cryptacize. Take their florid back story, for instance, which chronicles the unlikely tale of how the band was named (frontwoman Nedelle Torrisi’s uttering of the word apparently resulting in her house tilting to one side) and their unorthodox recruitment procedure (selecting their drummer on the back of a mysterious YouTube video of a hand playing a cowbell). Or, more pertinently, take this, their debut album, which showcases their singular art of musical construction - or rather deconstruction, for the California three-piece don’t so much compose songs as smash them apart, inviting the listener to contemplate the often awkward juxtaposition of the fragments and the way the light reflects off their jagged edges, wondrously benign one moment, threateningly sinister the next.

It’s the album’s centrepiece, ‘Cosmic Sing-a-long’, which lays out this modus operandi most explicitly - “Every note is an unfinished song / We’re all in a cosmic sing-a-long”. It’s the band’s hope that their disjointed work, with its unnaturally abrupt crescendos and frequent mood swings, suggests more than the sum of its parts, that it’s up to the listener to fill in the gaps and ultimately make sense of it all.

And when the Cryptacize formula pays off, the resulting concoction is something very special indeed. Opening track ‘Stop Watch’, for example, is a genuinely awesome feat. A magnificent jumble of paranoid folk, autoharp whimsy and melodramatic musical theatre, it’s somehow both delicate and strong, simultaneously angsty and uplifting, deeply traditional yet also intrepidly experimental. Then there’s the closing track, ‘Say You Will’, a satisfyingly reflective, jaunty waltz of emboldening and inspiration - “Don’t be shy, look to the sky / Cos all the stars are on your side”.

Yet, aside from the sumptuous Broadway sensibility of ‘Willpower’, which is certainly deserving of three minutes of anyone’s time, the treasures to be found in the rest of this record all too often turn out to be fool’s gold - at best, serendipity-less rehashes of the exquisite opening track, and at worst, guitarist Chris Cohen’s cloying turns at the mic. All of a sudden, that suggestion of the listener having to fill in the gaps seems not so much a tool to engage the audience, but rather a straightforward cop-out.

And in the final analysis, Dig That Treasure must sadly be chalked up as another shining example for those who feel the album format may have run its course in popular music. Taken as a complete body of work, its overall merit is no better than average, yet this unflattering rating does the record’s genuinely excellent moments a huge disservice, consigning them to a fate of utterly undeserved opprobrium. Things have got to change, kids.