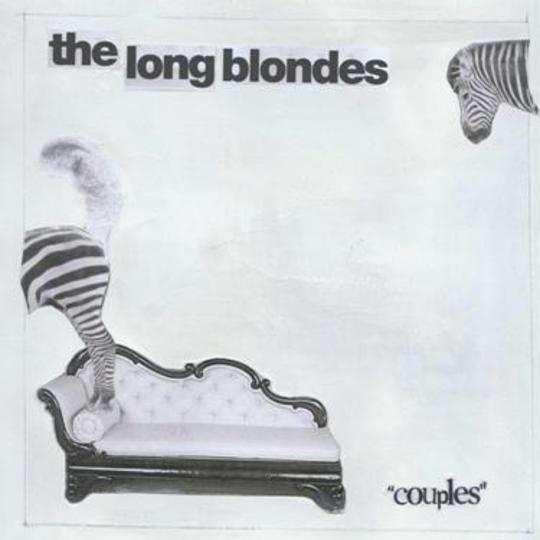 What's in a name? A lot, in the case of the second Long Blondes LP. The title, you see, gives the game away completely: it's a record about relationships, and more specifically relationships that have gone awry. It's also entirely autobiographical.

Since 2006’s debut album Someone To Drive You Home, you see, the two couples in the band (drummer Screech Louder and bassist Reenie Hollis, guitarists Dorian Cox and Emma Chaplin) have split up, while singer Kate Jackson has started dating their ex-tour manager after her previous, long-distance relationship ended. Hence the quotation marks around the title.

That The Long Blondes have been quizzed about all of this in recent interviews is to be expected, really, because "Couples" positively seethes with all the emotional confusion (resentment, bitterness, misery, jealousy, optimism et cetera.) a break-up can bring. That they've been so open about the specifics of the album's subject matter when answering those questions, on the other hand, is slightly more of a surprise.

Having said all that, it's lyrical ground they've trodden before. A lot of songs on their first album dealt in similar currency: see 'Giddy Stratospheres', 'Heaven Help The New Girl' or... actually, looking back at the tracklisting, most of it. Writing about affairs of the heart is nothing new for The Long Blondes, then, but if you've heard lead single and "Couples'" opener 'Century' you'll know it's a musical, rather than a thematic, revolution that's taken place between records.

Much has been made already of the supposed disco influence, and it's certainly one that's hard to deny. From the outset, 'Century' comes on a bit like a slowed-down, sexed-up 'Heart Of Glass', while 52 seconds into 'Guilt' the band even drop in 'I Feel Love'’s trademark synth-tro. Give it a listen. Cox's guitar sound, meanwhile, recalls 'Love To Love You Baby' - another Summer track.

Equally, though, the Italians Do It Better label is one the band sounds well acquainted with. The minimal electronic backing on both 'Too Clever By Half' and album highlight 'Nostalgia' isn't entirely dissimilar to the vibe on Chromatics' really-rather-wonderful 2007 LP Night Drive. "That was then and this is now / That was just nostalgia" sings Jackson on the latter, the stark emotion in her voice nothing short of affecting.

Indeed, the improvement in her delivery on "Couples" is one of the key reasons it's a more palatable record than its predecessor. A common criticism of STDYH was that La Jackson didn't vary the tone of her voice much, an accusation that can't truthfully be levelled here. Not only has her singing improved but she's also better at controlling her vocal chords: from subdued to shouty ('Nostalgia' and 'Here Comes The Serious Bit') via breathy ('Century'), bashful ('Too Clever By Half') and brassy ('I'm Going To Hell'), we see the full extent of this newfound range.

Her bandmates, too, are definitely more accomplished players now. Naysayers might argue that's not much of a compliment - and the LBs themselves would probably admit to being a little shambolic in the early days, an oft-discussed topic - but "Couples" doesn't sound like an easy record to write _or_ play. Quite the opposite, in fact.

'Round The Hairpin', for instance, isn't a song you can imagine them writing circa STDYH. Its hypnotic, droning six minutes surprise and confuse in equal measure, like The Slits gone dubstep... or something. What's certain is that as the record's midpoint it anchors everything together perfectly, largely by virtue of its overarching oddness compared to anything that's gone before. Their most daring composition to date, it stands out here like an impeccably manicured sore thumb.

Erol Alkan's role in all this shouldn't be underestimated. His production leaves "Couples" sounding brash, bold and bright, accentuating both the big, chorus-driven pop songs and the synth-driven, floor-filling efforts. There's also a lot of crossover, as you'd hope, between the two. This isn't an indie-pop record faking a penchant for disco to make a quick buck, it sounds instead like the work of a band - and producer - attempting to fuse two genres they genuinely love in a fresh and interesting way. Based on this and his work with Late Of The Pier and Mystery Jets (another surprising sonic transformation), Alkan's certainly got a bright future ahead of him behind the desk.

As for The Long Blondes, where they go from here is anybody's guess but with "Couples" they've managed to turn two years of inter-band heartache into an ambitious, forward-thinking pop record that tops their debut by quite some distance.