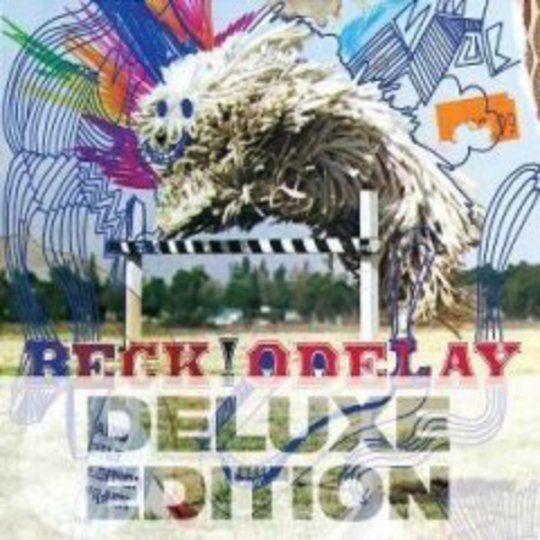 While pop acts like Girls Aloud can simplify their methods of communication down to mere funky music nowadays, forsaking the need to learn even the most elementary French, in the mid-‘90s Beck’s Odelay acted as some sort of surreal sonic Babel fish, translating a million musical tongues into a single massive-selling album of attention-flitting experimentation, fusing hip-hoppin’ jangle-rock, sample robbery, slacker indie and torch-song acoustica. Upon its release in 1996, Beck’s second LP for major label sorts Geffen, following a succession of indie releases, was heralded as a classic of its kind, not that its kind was easily explainable. Suffice to say its impact was huge, and without it the praise directed the way of acts like The Beta Band and The Avalanches, among many others, could’ve faltered short of the mainstream.

Over ten years on, Odelay fully deserves its re-issue, here in an expanded ‘deluxe’ set with a second disc of remixes and b-sides from the time. The original album doesn’t feel as dated as many other critical successes of its era – Sneaker Pimps’ Becoming X, Kula Shaker’s K, even DJ Shadow’s unprecedented but definitely of its time Endtroducing – and the hits still shine. Drop ‘Devil’s Haircut’ (here in its regular guise and with remixes from Aphex Twin and Mickey P) or ‘Where It’s At’ at any indie club today and the floor will fill. Elsewhere, ‘Novocaine’ still kicks like a mule, and ‘The New Pollution’ is slicker than a teddy boy’s quiff. But this you know – if you’re reading DiS and have never heard Odelay then you’re quite possibly here by accident. What’s interesting here is the assortment of bonus t’ings.

‘Feather In Your Cap’, recorded not with main album producers The Dust Brothers but Bong Load’s team of Rob Schnapf and Tom Rothrock, is a laid-back acoustic strum-along that’s an echo of Beck’s pre-Odelay material – a gentle shuffle rather than a cocky swagger, quietly affecting in a delightfully understated way. From the same sessions is ‘Brother’, which reached UK ears on the b-side to ‘Sissyneck’, another easy-on-the-ear effort that finds Beck’s vocals floating in ethereal style, far removed from the grabbing bark that characterised much of Odelay. Rougher cuts come in the forms of ‘Electric Music And The Summer People’ and ‘Thunder Peel’, but many of disc two’s selections are stripped-back songs that most certainly wouldn’t have fitted Odelay’s genre-hopping mould. All essential? To collectors, no: you’ll have them already. For fair-weather fans wanting to dip their toes into the past, sure. There’s history for learning here, aplenty.

The package is completed by an informative booklet offering not only lyrics but also an introduction by Thurston Moore and Q&As with teenagers of today, asking about Beck’s impression on them after hearing Odelay for, more often than not, the first time. Most appear wholly unaware of the diminutive Californian. Lucky for them this genuinely essential album is being re-issued now, then.