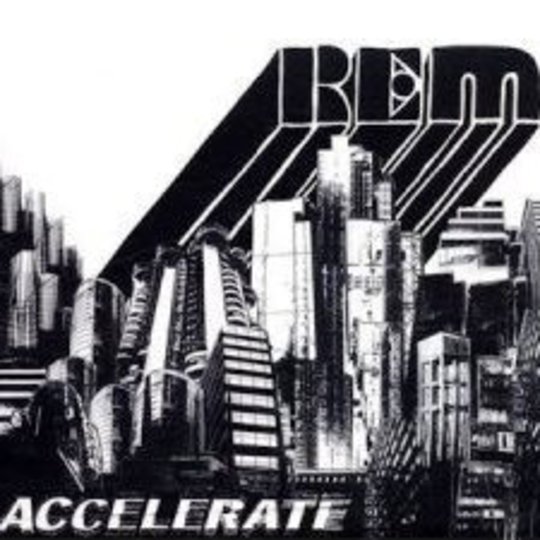 A few years ago, touring their last album, the rightly maligned Around The Sun, I was watching a show at the Hammersmith Apollo. It was the only time I have seen R.E.M. be less than breathtaking – but a set heavy on recent tracks inevitably saw things rather leaden. Worse was to come however, when singer Michael Stipe announced from the stage that they were going to play a new track that didn’t make the album called 'I’m Gonna DJ'. It was the exact moment that I knew that R.E.M. were over, with no real chance of resuscitation. Which is ironic really – and also a timely warning to music commentators that they do indeed know nothing – because it was actually the starting point of their renaissance. With a song title as awful as that, you do understand the fears, though.

So, now we have Accelerate; the actualisation of a new found urgency. Gratifyingly short at under 35 minutes, it’s a summation of much that is or was great about R.EM.: wordy proclamations by Stipe, ringing Rickenbacker trills by Buck and lush backing vocals by Mills. You could argue that it’s a calculated, pre-meditated offering, shunting 15 years of R.E.M. pre-Bill Berry’s departure onto one disc, but that would be to ignore the very real sense that they mean it, man. And seemingly they do.

The opening trio of songs burst out of the blocks with nary a glance backwards or a stop for breath. ‘Living Well Is The Best Revenge’ opens with one of those Peter Buck open chord jangles that seems to herald the start of all great R.E.M. albums, with Stipe calling “all you sad and lost apostles” to arms, referring as much to his band and the listener. ‘Man Sized Wreath’ follows, offering churning Hammond organ a la something from Green or Document, while lead-off single ‘Supernatural Superserious’ is the sort of timeless R.E.M. song that they seemingly churn out in their sleep; the sunny feel, irresistible chord changes, golden chorus and whimsically bright lyrics that refer to “summer camps” and “an experience so delirious”.

‘Hollow Man’ is a self-castigating, self-aware criticism of what it is to disappear up your own rear - “I took the award for last night for complicated mess / for saying things I don’t believe” - but finds Stipe, thankfully, declaring “I don’t want to be the hollow man”. Nice to have you back. There is a slight sag in the album’s middle, rather like that of some of the album’s proprietors, but similarly it’s not bad per se, just weathered and comfortable. Both the southern-gothic ‘Houston’ and the drum-heavy ‘Accelerate’ sound like tracks that they might have created with a little more craft 18 years ago during Life’s Rich Pageant, while ‘Until The Day Is Done’ – the only real acoustic offering on Accelerate – falls under the same malaise as the previous album, proving that R.E.M. in 2008 are better plugged in than plaintive. ‘Mr Richards’ though is a welcome antidote - a caustic paean to failed politics with guitars grinding and Stipe accusing. ‘Horse to Water’ is twice as furious and equally as pleasing; their own ‘Won’t Get Fooled Again’ mixed with the fin de siecle rage of ‘It’s The End Of The World As We Know It’. Even final track ‘I’m Gonna DJ’, despite its enduringly appalling title, escapes lame duck tagging. Continuing the same end of the world joy, it’s a suitable album closer and sign off to a remarkable turnaround – “I don’t want to go ‘til I’m good and ready” exhorts Stipe, and there’s very little reason to doubt him.

For seasoned R.E.M. fans, the criticism may be that Accelerate’s best moments also remind of other songs from the band’s extensive back catalogue, and it’s partly true. There’s a strong whiff of Document, Green and Lifes Rich Pageant, in particular tracks like ‘These Days’, ‘Swan Swan H’, ‘Disturbance At the Heron House’ and Automatic for the People’s ‘Ignoreland’. ‘Sing For The Submarine,’ towards the end of Accelerate, even makes reference to two previous songs: ‘Feeling Gravity’s Pull’ and ‘Electron Blue’. But it doesn’t seem to matter a huge deal, given the lightness of touch and the firm grasping of glories past rather than a desperate scrabble for renewed acceptance. It’s also enjoyable, a band recognising their own best work, stealing from within rather than forlornly taking from exterior influences and ‘now’ sounds. It’s a similar trick to that achieved by U2 in the post-Pop years that saw their reclaiming of the title of World’s Biggest Band, and not too different from the what Neil Young’s been pulling since the mid-‘90s and records like Harvest Moon and Silver & Gold.

Chances are R.E.M. wouldn’t have made a record as good as this if they hadn’t been stung so hard by the criticism of the last few records. Maybe they had to go there to come back. Whatever way, whatever motive, whatever reason, it’s nice to have them back and on this form. Here’s to the next few records.