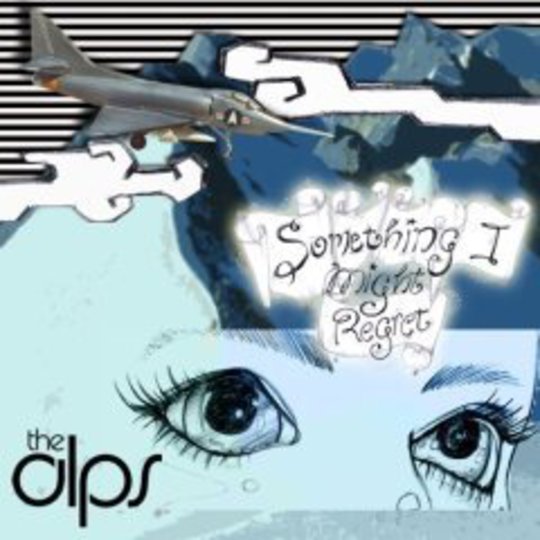 What probably seemed like a good idea at the time of conception now seems unfinished and diluted, constructed with little thought to longevity or sustainability. The gestation process behind The Alps’ debut record could be described in such a way, appearing noble but actually ending up rather like a bin without a bag. Apparently, the lovely folk at Slicethepie (a website, yeah?) cajole fans into paying for bands to record, and then the fans buy the record anyway, so probably end up paying about twenty pounds for the whole package. And when you've lumped out extra for the privilege of… err, owning a CD, consumer Britain would expect something a little special, non?

In Something I Might Regret, The Alps have recorded something they might regret (sorry), a digestible but ultimately flimsy collection of breezy 16th drum-led indie spike-songs about how wistful you can be when you break up with someone. 'Not So Laughable Now' is a bit fast, with a half bar displacement Pixie-trick chorus and a shout-along unaccompanied bit near the end, and is really boring. The lyrics, such as they are, go on about how funny it is that sometimes couples are happy, and then sometimes things get worse and they break up. Scintillating, insightful, subliminal it is not. Worse still is the following reliance on maligning the dourness of Britain (“despite the English weather you make it warm and bright”) on 'World At War', coming off as nothing more than sub-Hard-Fi paeans to not having enough money to buy lunch at Pret.

Worst of all, though, is the childishly Smiths-stealing bounce of 'Curriculum Vitae'. The premise is so pointless and faux-romantic that it merely sounds like the whine of a 15 year old consigned to a shift in McDonald’s on weekends. “You're working all the hours God sends for someone you don't like, you know where you can stick your Curriculum Vitae”, sings Dan Heptinstall. Well, sir, might I suggest you stick that CV into an envelope bearing the address of somewhere you'd like to work instead? If you don’t have the strength of mind to rise above the dreariness of working for someone you don't like then you don't deserve a guitar. “Don’t go to work today, it's overrated,” he continues. What then? Walk about the city centre aimlessly waiting for all your less obnoxious friends to knock off from Barclays and the estate agents? Company cars can be pretty good, you know.

So yes, little to recommend The Alps then. But the concept behind this LP's release needs evaluation. It might be crude and obvious to highlight Radiohead as a comparison point, but they too are a band trying to intensify the influence of the consumer on what music is released and how it is received. The crucial difference (apart from In Rainbows being excellent) was that Radiohead allowed their fans a real privilege by getting a landmark album for free – The Alps make people pay more than usual for something that, no matter how many XFM sessions you record, is not up to scratch. This system of release could, given some jiggling, be tweaked into a platform for releasing genuinely innovative new music in a fan-inclusive way. As it stands, it is nothing more than expensive way of getting the over-egged sound of the suburbs into your life.