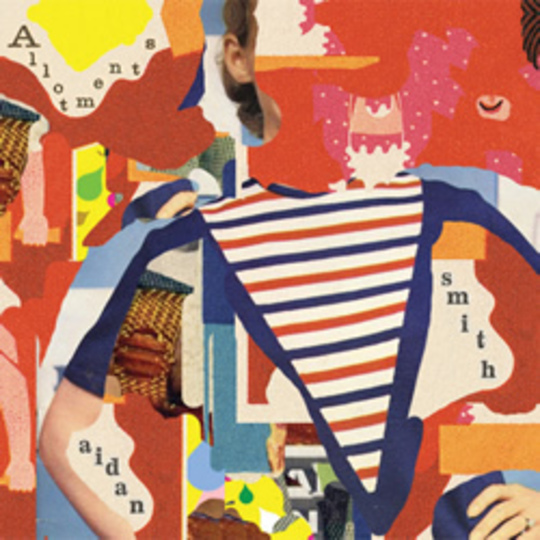 When looking back at press for Aidan Smith's first record, Early As The Trees, I discovered that I recognised it from having placed endless copies of it on the shelf at the record shop I used to work in. This is all I know about the man. The artwork suggests tweeness, psychedelia, and all manner of identikit folky goodness. The artwork for Allotments suggest roughly the same but… more so. There's little focus, and wilder colours. As you can imagine, this translates into the record rather nicely. Hark at that!

The fourteen tracks here are sweet, short, and very confusing. Recalling the cheekier moments of Clinic and several Merseybeaters gone by, Smith is a chameleonic impressionist of considerable pop skill – but it's all in the head, see. While the tales he spins are quite obviously fantastical, he fails to make us believe that they could be real, or that he thinks they're real. What's a good example… When Grandaddy sang about a robot they built getting drunk and killing himself, it felt like you'd lost a family member. When Aidan Smith lists the contents of a surly old gent's pockets, it's done with a music hall flick of the wrist and a wink at the camera that Queen could have carried through to greatness. Sadly, not quite here.

When the pop flows forth without the cloy of confusing lyrical conceits, though, there's joy. The Jim Noir bounce of 'Drapes Of Black' is fantastically_ Grange Hill_, all cheeky harmonica and childish trumpets. The presence of recorders and willy-nilly synths also add to the whimsy which, by track three, hasn’t worn off yet. But then it does, you see. Too many tracks spoil the musical broth and Smith can't control himself. It's hard to say exactly what makes a twelve-track album perfect and a fourteen-track album slightly wearying, but it's in abundance here. It's not annoying, particularly, but it is difficult to enjoy as much as you'd want to. An excellent EP with sly personality problems, stretched out to the length of an entire album.