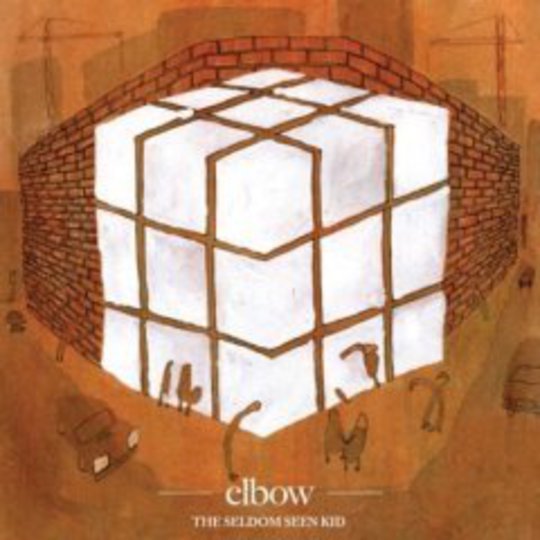 Elbow’s new album, their fourth, is reassuringly boring on initial contact. Reassuring because if Elbow fans know anything, it’s that the band they love make music that rewards revisiting, that slowly unfurls itself over time to reveal sonic and emotional depths inconceivable at the first glimpse. If The Seldom Seen Kid jumped out and stamped itself on the dancefloor or airwaves from the off, you’d know something was amiss.

Because the joy of Elbow is in the details, both of Guy Garvey’s beautiful gutter poetry and his band’s wondrous arrangements. Their songs are completely bereft of platitudes and cliché, both musical and emotional, and this is the triumph that elevates them above the bands so often erroneously labeled as their contemporaries (most namely Coldplay): when an Elbow song repeats itself it is to build tension and release, not because it has nowhere else to go; when Garvey opens his mouth to sing it is to express the details of real human stories, not anonymous lines that anyone could project upon.

It’s with a typical pragmatic emotion, and lack of moribundity, that The Seldom Seen Kid is titled in memory of a friend of the band who died two years ago. That pragmatism is extended to the record’s production: for the first time, Elbow have done everything themselves - recording, mixing, producing - without any outside help, a fact of which they are justifiably proud.

Elbow’s albums have always been considerably better in pure sonic terms than their contemporaries, and there is no erring from this quality here; absolutely every element throughout the album is rendered beautifully, be it guitars, strings, any facet of a myriad array of percussion, or the microscopic sonic touches that paint life and dust into every sun-beam illuminated corner of the recording studio. Instruments and voices reverberate and decay in a way that enhances the songs by making them evolve inside your ears with every listen.

‘Starlings’ starts The Seldom Seen Kid with a bizarre squall of headache noise and then clockwork nothingness with gentle, gentle, padding percussion and gossamer harmonies. Huge swells of sound surround Guy Garvey in imperious cycles as he begins to sing (“so yes I guess I’m asking you / to back a horse that’s good for glue / if nothing else”); it’s not a new direction for Elbow – short of sounding like The Kooks there are few new directions they could travel – but it doesn’t sound quite like anything they’ve done before.

They’ve also never done anything quite like ‘The Fix’ before; dappled, opalescent organ and guest vocals from Richard Hawley making for a Lynchian evocation of the crooner’s milieu. Over their last two albums Elbow have escaped the spooky, crawling claustrophobia that occasionally threatened to engulf them on their first records (think ‘Bitten By The Tail Fly’ and_ ‘I’ve Got Your Number’); something like ‘The Fix’, or even the European lilt and drone of _‘An Audience With The Pope’, laconic and pointed, which flits into Tom Waits-esque fucked-up dusty guitar licks, would have been outside of their capabilities five years ago.

‘The Bones Of You’ _(which is supplicated bizarrely but beautifully into a lone piano and trumpet playing a jazz elegy of ‘Summertime’ while _Big Issue sellers and pedestrians go about their business outside the studio) and ‘One Day Like This’ are the twin emotional high-points of the album, each deploying a soaring chorus or two; the former is a reminiscence though, of_ “five years ago and three-thousand miles away”, while the latter is a joyous, romantic celebration of _right now (“holy cow I love your eyes”) that gathers, swells, and unfolds over six anthemic minutes.

The creative peaks of The Seldom Seen Kid are numerous; the chiming delicacy, gentle swell and gorgeous touches of piano through ‘Mirrorball’ (“we kiss like we invented it”); the monstrous riff and subsequent bass-run that tear through the middle of ‘Grounds for Divorce’; the ethereal harmonies of ‘Some Riot’. If one was pushed to choose an absolute highlight it might just be the driftingly beautiful ‘Weather To Fly’; touched with elegiac horns and beautiful lyrics, its plaintive melody circling itself around and around, always finding its own beginning.

Angrier politically and more contended emotionally than before, Elbow are no less beautiful and imaginative. A more evenly-distributed record than Leaders Of The Free World, which accentuated its internal dynamics by vacillating wildly from maximalist stomps to sparse elegies, the achievement of The Seldom Seen Kid is that Elbow manage to be both incredibly consistent and perpetually improving. It’s an easy phrase to utter, but Elbow are one of the finest bands in the world right now.