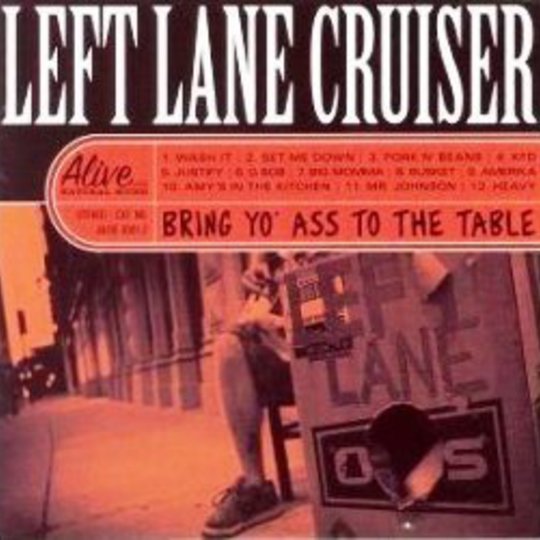 Simplicity is best on occasion. Just ask Jack and Meg White if you need further proof. The loud bang they made at the start of the decade stemmed from nothing more than the sounds of a guitar and child-like drumming. The old adage of less is more certainly ran true for the candy stripped duo. It’s also worked for The Black Keys, The Kills and Lightning Bolt, to name but a few.

Fort Wayne Indiana’s* Left Lane Cruiser *has certainly taken the message to heart. Seeping themselves in the long standing tradition of blues-driven swamp rock, this country-fried duo attempt to kick up a storm of righteous, whiskey fed hellfire on their debut, Bring Yo Ass To The Table.

Things start off promisingly enough on opener ‘Wash It’. With a tin can rhythm keeping time, the pair let loose on a barrage of lo-fi rock ’n’ blues licks while the band’s Freddy J IV lays down vocals that sound as if they’ve been seared by a healthy dose of backwoods moonshine. It’s favourably reminiscent of RL Burnsides latter day work with the Blues Explosion on A Ass Pocket of Whiskey.

‘Set Me Down’ and ‘Pork N’Beans’ follow the exact same trajectory, as do _‘Big Momma’ _and ‘Amerika’_, and this is where everything careens headlong into a dead end. Having turned the volume all the way up to 11 and left it there from the word go, the pair’s lone southern blues rock formula gets paraded out again and again and again, until any attempts to pick out some much needed sense of variation prove to be entirely futile.

Best look elsewhere if you’re after something with a bit of raw blues muscle. All you’ll find on _Bring Yo Ass To The Table _is a limited range of clichéd grunts and groans aimed squarely at the traditionalists – and there’s no guarantee that even they’ll like it.