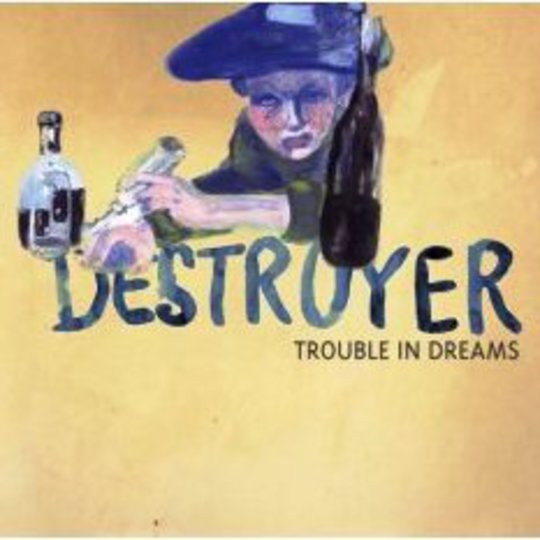 It should be mentioned straight away that the Destroyer we’re chitchatting isn’t the Kiss tribute band or a Norwegian thrash metal band which may or may not exist. Self-described as ‘European Blues’, Destroyer’s Daniel Bejar is probably better known for his contributions to The New Pornographers when he should be an icon in his own right. Any number of twists of fate could have landed Carl Newman’s band playing a supporting role to the more adventurous Destroyer. But then we’d risk spoiling the magic.

Destroyer’s back catalogue swings like a tether ball around the indie rock poll, Bejar alternately letting the string out for the acoustic mish-mash MIDI foray of Your Blues and pulling back for anthemic glam-rock on_ Streethawk: A Seduction, each album taking on particular genre characteristics without losing its identity as a Destroyer album. Here, Bejar touches upon shoegaze and folk and points between the two with equally deft skill. The spaghetti against the wall technique could well backfire, spelling disaster, yet what emerges is sparkling pop melodies graced with the wordplay of an iconoclastic poet. _Trouble In Dreams is Bejar’s tenth solo record if we dare consider Destroyer to still be the one-man show it started out as with the DIY We’ll Build Them A Bridge in 1995; nowadays the band sounds more like a permanent fixture than it ever has.

For the growing number of die hard Destroyer fans any new album is cause to rejoice. As a voice for those who “live in darkness / light is a dream”, Bejar could as easily be heralded as the new Morrissey if immediate parallels to a young David Bowie and Stephen Malkmus weren’t obscuring his apocryphal themes. For the rest of us, Trouble In Dreams offers another opportunity to join the celebration. As a band whose albums were often perilously dotted with one or two cringe worthy episodes of scattershot solos, languid instrumentation, and some songs plain better left as forgotten demos, Dan Bejar reins in his best qualities so that_ Trouble In Dreams_ is the natural extension of 2006’s phenomenal …Rubies album.

Bejar’s voice remains the sticking point. His affected English accent strays into Flight of the Conchords _territory on the opener, ‘Blue Flower/Blue Flame’, prompting a vexing situation of deciphering parody from earnestness. His voice has mellowed since the lo-fi _Thief introduced me to the band in 2000, and should warrant giving Destroyer a second chance if you were put off on the first go-around. By the time track two, ‘Dark Leaves From A Thread’, is underway it should dawn on you the vocal nuances are the inflections which set apart many New Porno’ songs from contentious sugary sap into uniquely charming pop gems. Clearing this hurdle has Destroyer jumping from being an intriguing weekend bar band into your own little secret, as painless as a whiskey shot flu remedy.

The evocative lyrics are the roots by which the songs grow, becoming instant sing-alongs. If this accessibility is all too cheesy for you then we’re just not on the same wavelength. From the opening line on ‘Foam Hands’, “True love regrets to inform you”, the song practically writes itself from there. Bejar fills in the blanks as an afterthought with a musky, “I didn’t know what time it was at all”, as musical accoutrements are layered upon one another, culminating in an oddly regal choice of keyboards paired against boyish whistles. Honey drenched reverb accents Bejar’s look back on the standout ‘My Favorite Year’, in which it’s an easy transition to visualize a swashbuckling Alan Swann confronting conflicting rumination of glorious victories with demoralizing defeat through an alcoholic haze. Borrowing movie titles for song titles is a trick Bejar has used before but, rather than pretentious or lazy, it provides the listener a much needed hint at deciphering the puzzling lyrics within. Bejar is never condescending or patronizing and for that reason he can assume the role of the common man which isn’t Bono phony-baloney._ “The whole point of everything is moving on,”_ he exclaims, the epiphany underscored with a guitar hook which loses pace with the melody and it takes a simple strumming of an acoustic guitar to regain the song’s equilibrium.

You’ll hardly ever hear Daniel Bejar mentioned in the same breath as Leonard Cohen or David Berman when it comes to great lyricists, and I suppose that’s just fine and dandy for a guy seemingly satisfied making his livelihood from the crumbs of the mainstream._ Trouble In Dreams_ is less concerned with taking pot-shots at the establishment than on previous albums, although there is that; instead, it envelops itself within a romantic cocoon of an insulated reality. Content to live in the art he creates, and it’s all a matter of perspective whether he’s on the outside looking in or vice-versa, Trouble In Dreams is full of amazing poetic adventures which could never flourish in the harsh light of the public eye. Something this beautiful should be our secret.