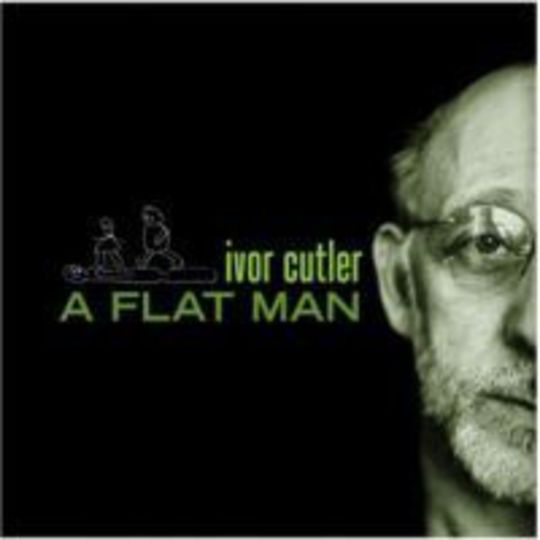 a man is flat.

Unavailable since 1999, A Flat Man was originally released in 1998 through Creation and found the Glaswegian absurdist, as ever, wrapping his tongue round verses in his soft Scottish brogue, where euphemisms confuse the pure and drag the odd down into the dark.

Cutler’s life was as beguiling as his works. Born all but by the gates of Ibrox Park in 1923, young Cutler suffered from anti-Semitic abuse throughout his impoverished upbringing due to his eastern European ancestry, schemed to kill his younger brother, object of his mother’s affections, before eventually being caught by his aunt in the heat of the act, as well as struggling at school to develop his handwriting much beyond a wanton scrawl. Later in life, after being dismissed as ‘absent-minded’ during his brief stint with RAF during WWII, Cutler became a schoolteacher – the career he would continue with into his late 30s.

Cutler began to pen pieces of prose and poetry with half a mind towards publication which remained largely idle indulgences until in 1959 when he was asked to perform on BBC’s Tonight programme. It was with this appearance that his career took a true turn, eventually culminating in his debut foray, in what would eventually become a vast discography spanning five decades, with Ivor Cutler Of Y’Hup released in 1959, before endearing himself to John Peel (for whom Cutler would notch up nearly as many session recordings as The Fall – 21), John Lennon (enrolling him as Buster Bloodvessel for Magical Mystery Tour) and Robert Wyatt (with Cutler appearing on the Soft Machine lynchpin’s seminal Rock Bottom).

As a man who once said Kafka's bleak final novel The Castle encapsulated him perfectly, Cutler dives into a brand of his own unique miserabilism, opening with ‘A Bubble Or Two’ – detailing the suicide of a drowning mother – and followed soon by ‘Jam’ - “What’s your favourite jam? Traffic jam - it’s the jam for a man” - A Flat Man showcases one of his darker turns, lightened by the usual melée of mischievous innuendo (‘I Ate A Lady’s Bun’) and surreal wit (‘Birdswing’). With all 48 tracks rarely making it past the minute mark the record is not far removed from collection of short stories, modest compositions sat round Cutler’s stoic enunciation and outstanding appreciation of comic timing. As with the current works of artist David Shrigley, it is Cutler’s ability to bend the surreal and arbitrary into something gloriously poignant that makes his contribution so outstanding.

As one of the less musically-focused records released by Cutler (with his harmonium recorded low in the mix), this isn’t necessarily the best entrance point into his catalogue – perhaps instead go for the George Martin-produced Ludo (1967) or peerless Jammy Smears (1976) - but as his final release before his death in 2006 and second release in as many years (following A Wet Handle), A Flat Man is a defining moment as the closing chapter on a poet laureate for a deranged generation.

Hoorgie House is a new imprint - set up by Jeremy Cutler, son of Ivor - with the intention of circulating rare Cutler material over the next few years.