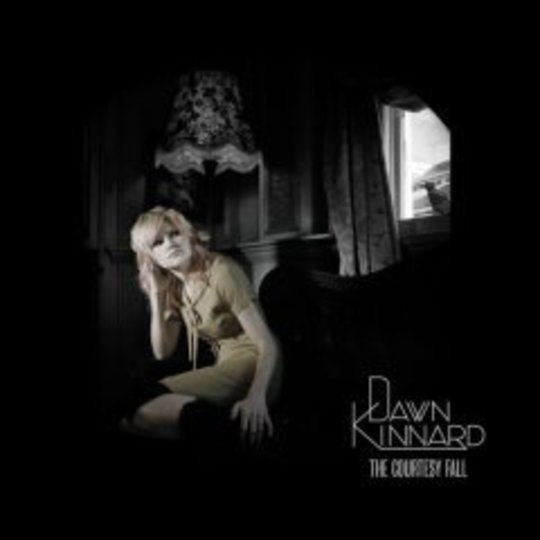 Are you ever slightly bothered by the fact that you like certain records on first listen that you think you shouldn't? I am. It's something, I assume, a lot of people who consume masses of music very quickly have to face up to; sometimes you're a little too tired to be as staunchly critical as usual and you just lull yourself into a state where little songs by little girls are just peachy and exactly what you fancy right now. A Tuesday afternoon at work finds me in this exact predicament, somehow unbothered by the facts that would normally raise a sceptic's brow: produced by the same guy as KT Tunstall and James Morrison! Wrote one song with Cerys Matthews! Frequently compared to Chris Martin! All are frightening facts attributable to Dawn Kinnard's The Courtesy Fall.

Of course, as soon as you get home and have a cup of tea you see things more clearly and are more suitably equipped to make a non-woozy assessment. It's a nice record, far nicer than most of the vacuous cack you might associate with the production credits, but it's nothing remarkable in the long run. There are touches here and there that whisper maturity, whisper virtuous angst and snuggly blues, but a few more chances taken would've made a stronger album. String arrangements are clever and confident, and should be more prominent everywhere on The Courtesy Fall. Kinnard's voice is stretched nowhere near enough at any point. The lyrics aren't confessional enough (who cares if you've not much to confess, make some drama to get the nu-ravers into Tori Amos!). It's over-reliant on the simplest chord progressions imaginable. There's more.

But obviously it's not terrible, otherwise I might not have been weakly drawn to it on Tuesday afternoon (I made a mistake in eating my flapjack too early, energy levels were sapped). It is dull, though, and not by any means substantial enough to elevate Kinnard to star status just yet. I can't pinpoint exactly what it is about Dawn Kinnard that was so perfect for a few minutes, because whatever it was disappeared very quickly. Maybe it was the melismatic bob of her voice, maybe it was the fact that the promo artwork features a massive dog playing the piano… there's something to recommend here. The Courtesy Fall is caught in a relaxing limbo, neither mainstream enough to warrant a slot at Wireless nor backwater enough to make Will Oldham fans gob into a spittoon. Back to work, everyone.