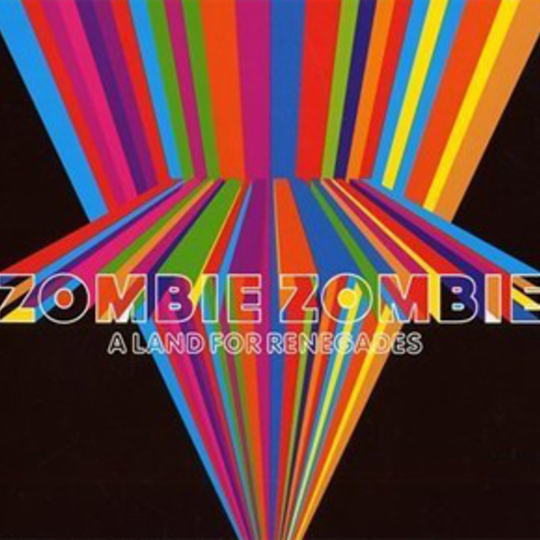 Most people's idea of a relaxing vacation usually involves doing as little as possible, mostly in a horizontal position while over-indulging in a little too many refreshments of the alcoholic kind. Not so Herman Düne drummer Cosmic Neman: he's thrown his hat in the ring alongside jazz musician and sound engineer Etienne Jaumet to create something on an entirely different plane from the twee folk associated with his full-time employers. Don't all gasp in disbelief, but A Land For Renegades could possibly be one of the most essential electronica records of 2008.

To call this a marked departure from what anyone would have expected would be something of a ridiculous understatement, but as Zombie Zombie, Neman and Jaumet have constructed one of the most dynamic and unpredictable collections since Add N To X's Avant Hard in 1999.

Based on a soundtrack to an imaginary film, A Land For Renegades' storyline revolves around two characters - Neman and Jaumet, naturally - being chased through the desert by a pack of wolves only to end up in some ghost town in the middle of nowhere. Having finally escaped, the pair then drift off into a deep slumber only to be awoken by a series of horrific hallucinations.

The album itself is split into eleven pieces of largely instrumental music, each of which depicts a scene from Zombie Zombie's hallucinogenic script. What unfolds is something akin to a 1970s b-movie score such as Dawn Of The Dead or La Planete Sauvage; Barry or Morricone this most certainly isn't.

Musically, Suicide, Neu! and (as aforementioned) Add N To X come to mind, the former particularly on the macabre cover of Iggy Pop's 'Nightclubbing', allegedly one of the horrific dreams mentioned earlier which involves the ghosts of Messrs Ostenberg and Bowie performing said song in basement club somewhere in the desert. Likewise 'What's Happening In The City?', which sounds like Alan Vega reading a graveside eulogy over grinding synths and distorted effects, "There's not a single chance for you to win..." ringing ominously as the music peters out in the distance.

A Land For Renegades is probably best summed up by the closing 'When I Scream You Scream', which sounds like the end credits of a Coppola flick being stamped on by Gary Numan and Photek simultaneously. Disturbing to the end, this record isn't for the weak of heart, and although not quite in the same ball park rhythmically as fellow Gallic duos Justice and Daft Punk, A Land For Renegades is no less inventive than either's finest works, and therefore a crucial addition to anyone with even the slightest interest in experimental or electronic music's collection.