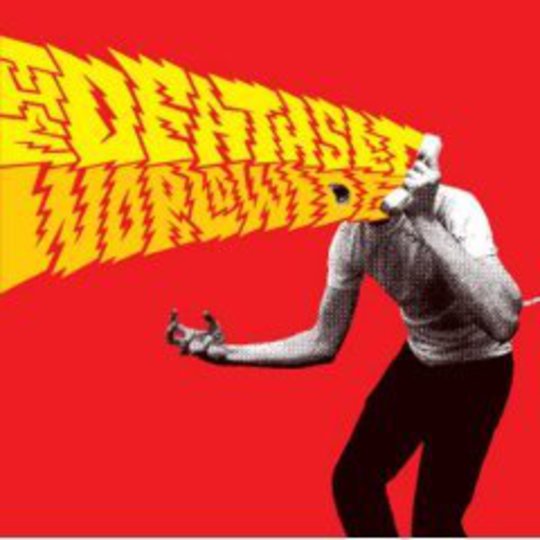 Whether you see them as a hyperactive blast of chaotic affirmation or an annoying case of A.D.D. children who sound like they’ve been slamming down shot after shot of refined sugar, one thing is clear: The Death Set are operating with all cylinders firing on maximum overdrive.

Worldwide, their debut LP, only proves this point with 18 short bursts of gurning punk flying at you over the span of a lean 26 minutes. First impressions point towards the art-school-kiddie-core championed by Dan Deacon and his fluro comrades in the Wham City collective. Little surprise then that The Death Set’s co-founders, Johnny Siera and Beau Velasco, uprooted themselves from their native Australia a few years ago to resettle in the urban grit of Baltimore.

Like Deacon, The Death Set favour rooting through a rubbish bin filled with decades’ worth of pop-culture refuse for their inspiration. ‘Superzero’ slams together an 8-bit plonk with cranked-up, megaphone chanted vocals and methamphetamine fed melodies lifted from Gary Numan’s ‘Cars’._ ‘Day in the Wife’ takes things one-step further by mixing hardcore punk with Fisher Price instrumentation and chipmunk vocals. But it’s the electro-charged pop-punk of _‘Around the World’, with its call and response nursery rhyme chorus, that personifies The Death Set’s devotion to a new world order filled with candy-coated punks.

Yet for all their punk with a bright, shinning smile on its face, there’s a sneaking suspicion that The Death Set may have to sit on that instantly gratifying yet soon to be disposed of pile. With so much crammed into such a short amount of time, the resulting sugar rush comes complete with the requisite peaks and sickening crashes fully in tow.

Best advice for approaching Worldwide? Stick to moderation. Small doses are a thrill, but consume too much and you’ll find yourself in need of a dark quiet room and a cold wet towel draped across your forehead.