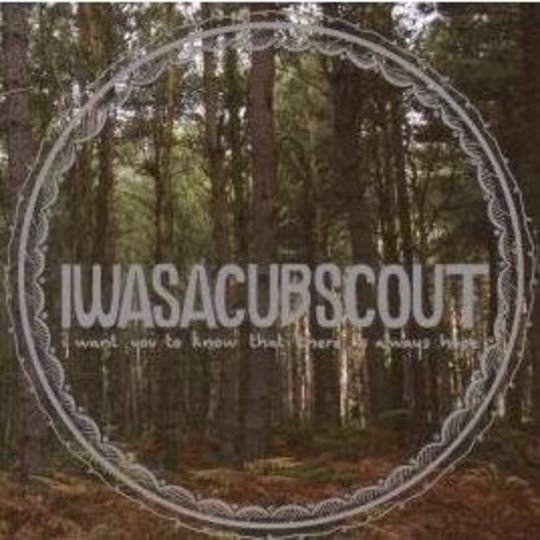 If they gave marks for effort I Was A Cub Scout’s _ I Want You To Know That There Is Always Hope_ wouldn’t just be Album Of The Year or even Decade, but Album Of The Entire Human Race, Ever. Every strained vocal, delicately strummed guitar and plinky-plonky, er, keyboard plink is liberally drenched in earnestness, in the desire to be loved. IWACS, you see, don’t want to be just another band you go and see – they want to be something special and they’ve evidently tried their hardest to make …Hope into more than ‘just’ an album; rather, they want it to invade mixtapes across the world and be what a million copulating couples listen to when they hold each other in the warm glow of, well, love.

The problem is that they’re not nearly as accomplished at writing heartfelt pop songs as they’d like. The now-ubiquitous ‘Pink Squares’ is the standout, and not because it’s the catchiest or most accessible song on …Hope. It turns their sometimes unwieldy – and, a crueller reviewer than myself might argue, lumpen – efforts at creating emotion into something sleek and even slinky. With a smoothly pulsating bassline and a chorus that stays just the right side of twee, it shows that when IWACS are much more effective when they stop trying to write simple, direct songs about being in love and instead go a little more oblique. “Yes I know I’m wrong / But there’s two sides to every story / Baby we are not the same / And we will never feel the same,” coos Todd Marriott, and it’s a moment of genuine and understated emotion on an album where seemingly around every corner lies some lyrical trap designed to elicit the maximum supposed response. And it’s not always successful: “When you leave this room / Be aware that I am following” – a cute demonstration of affection or a helpful warning of an impending sex crime? You decide.

And therein lies the problem with …Hope. IWACS try too hard to create these swirling emo-pop symphonies without actually taking the time to query whether or not the limitations of being a two-handed band make them viable or not. And yes, the Postal Service managed it but, seeing as every single other review of this album on the fucking planet mentions them, we’re not going there. ‘We Were Made To Love’ and ‘The Hunter’s Daughter’ are both fine attempts at making cute poptronica and almost, almost succeed. Where they do come into their own is when they achieve a sense of balance, when William Bowerman’s drums aren’t too pounding, when Marriott steers clear from the annoying vocal inflections and twinges and instead just lets his lungs out and the swirling, gentle melodies fold over one another. It doesn’t happen as regularly as it could, and usually, as on the outro to ‘The Hunter’s Daughter’, comes close to being truly lovely but ends up only trite. Instead of layering textured sounds to build up to a climax, the effect is spoiled by the fact that the synths sound plastic and cheap rather than rich and lush. Yes, that might be the point, but it just sounds like they’re being overly precious about being pseudo lo-fi. Three-quarters of ‘We Were Made To Love’ is wasted in laboured lyrics and too-obvious riffs before turning into the almost-anthem it always threatened to be and ‘P’s & Q’s’ sounds like Fisher Price’s My First Attempt At Writing A Song And Using Metaphors. We all know they can do better, so why didn’t they?

…Hope is by no means a failure then, but it’s not quite the success that IWACS’s initial promise suggested. There are enough moments sprinkled throughout (the first 41 seconds of ‘Echoes’, the outro to ‘A Step Too Far Behind’, pretty much all of ‘Pink Squares’) that do exactly what IWACS want them to do – make you feel like something magical is happening in your ears and in your heart. And not many bands can do that. While it’s clear that they try so hard – Marriott’s vocals for much of the album recall no one so much as Luke cunting Pritchard, the twinkly keyboards and glockenspiel effects are ludicrously overused as if to convey the sense that the stars are falling or some toss – it’s just a shame that they didn’t exercise a touch more quality control with their debut. This could have been a startlingly good EP but is instead a disappointing and, yes, somewhat lumpen album.