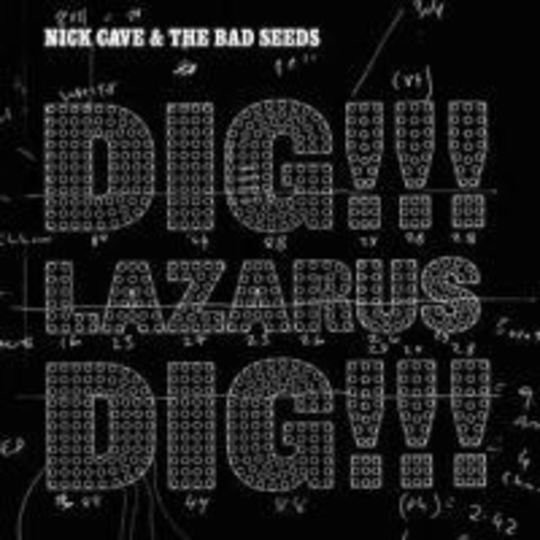 Having so enjoyed marching round with a proud erection stood between his loins, instead of a sordid one night stand Nick Cave had underlined that his pursuits with Grinderman would inform the next Bad Seeds record.

Keeping true to his word, with glands now hanging between wide strides, shooting fingers like a well-groomed city slicker fresh from divorce, ‘DIG, LAZARUS, DIG!!!’ (lifted from the forthcoming album of the same name) finds Cave and his cronies strutting round, as if off to play their lots at Vegas. Less Abattoir Blues and more Bingo Hall Blues.

“Ever since I can remember hearing the Lazarus story, when I was a kid, you know, back in church, I was disturbed and worried by it. Traumatised, actually. We are all, of course, in awe of the greatest of Christ's miracles - raising a man from the dead - but I couldn't help but wonder how Lazarus felt about it.”

Whether tongue is firmly locked in cheek or not, rather than soundtracking his yearning scrotum, DIG, LAZARUS, DIG!!! finds Cave returning to sneering narratives, blaring out declarations and observations to make you feel like the little fuck you probably are, documenting your downfall. Young Lazarus is the focus here, a parable plucked from the Gospel of John and placed into a suffocating New York City, with Cave laying off suitably prophetical descriptions of Lazarus’s decline following his unwanted resurrection and an apparent vehicle for Houdini to speak to us from grave. An unassuming return, then.

Why buy and not just wait for the long-play proper? The modest country croon of ‘Accidents Can Happen’ which is further proof that, fourteen records in, electrifyingly pent up, a gentleman’s mid-life crisis has never resulted in such glorious consequences.

Cut Off Your Hands

My Moon My Man (re-release)