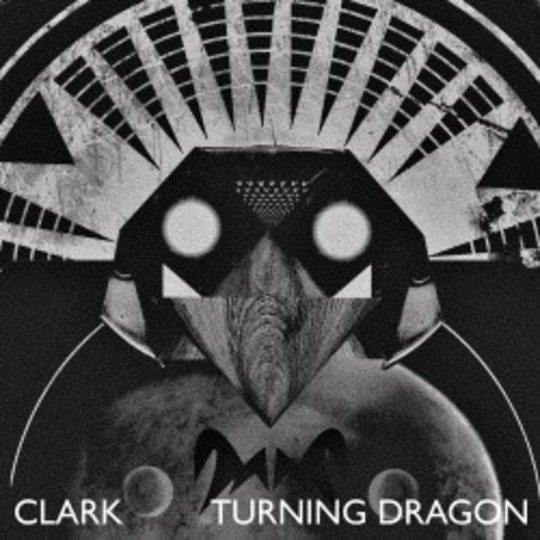 Last year, Chris Clark and I sat down for a chatter and a couple of pints in a Paddington public house; he stayed just long enough to acknowledge that his Body Riddle LP was an album that possessed a great deal of longevity, but also that “if you get stuck making music that’s the most precious material ever, I think it’s a cul-de-sac”. You can read the whole interview here, if you’ve the time. What was clear, thinking back, was that Clark isn’t one to stay still creatively, and he’s unafraid of moving backwards to progress; Turning Dragon is such a move, a successor to a rightly acclaimed album of electronic genius that goes for the jugular straight away, its charms deliberately surface level, glitch-beats clean of the sumptuous ambient haze and calming static drone that characterised its predecessor.

Inspired, in part, by touring a series of continental rave dens, Turning Dragon is a white-knuckle ride, its BPM frighteningly brisk when compared directly to what came before it, a pair of EPs – Ted _and _Throttle Promoter _– aside. The title of its opening track, _‘New Year Storm’, is indicative enough of what’s to follow: this is violent rebirth, renewal, freshness via the destruction of decadence, the eradication of excess and the purification of potency. It’s less a follow-up proper to Body Riddle, as its maker himself acknowledges, and more the resurfacing of a rawness that manifested itself in Clark’s mind long before the release of what was arguably 2006’s finest electronica album (review). Where Body Riddle’s curves were smooth, its surface mirrored for listener reflection, this is hard and rough, blotted by dirt and sweat. It feels abrasive on the ear, scatter-shot percussion flitting from one channel to the other while underpinned by a typically incessant heartbeat – click, twitch, click, twitch… buzzzzz ‘til dead and cold.

While Turning Dragon’s opener is something of a bridge-piece introduction – it doesn’t impact hard upon the attention, and instead nestles in gently; reminiscent in part of familiar arrangements, yet buoying with a slightly more erratic menace – the following ‘Volcan Veins’ is a blindsiding head-fuck, first-rate chaos and no mistake. Snatches of hyperactive, high-pitch and near-indiscernible vocals flutter wildly above a beat concoction best described as tumultuous – it’s dance music for acid-blood millipedes, tiny toes tapping out hyper-rhythms in triple time. Inevitable slow-down emerges eventually – ‘Ache of the North’ is a timely echo of grandiose achievements past, albeit stripped of atypical embellishments – but the general pace of Turning Dragon is admirably blitzkrieg. Listen to penultimate offering_ ‘BEG’_ and try not to, for mercy.

An album for the dancefloor this may have initially been conceived as, but such is Turning Dragon’s propulsive aggression and overall mood of confrontation that it’s hard to fathom how the standard club-goer could keep pace with its palpitations, its stop-start-whiz beats that send a lifeblood of sorts coursing to its prickly android skin. It’s hair-raising, startling in its disregard for established preconceptions and newfound admirers attracted by Body Riddle. If that album was Clark’s Constable – a luscious landscape to gaze upon for years and years – this is a Pollock for the here and now: immediate, irregular, divisive. I get the impression that such oddly contradicting adjectives will sit pretty with its creatively bipolar architect, who will almost certainly pitch another curve come this record’s own unnatural evolutionary step onwards.