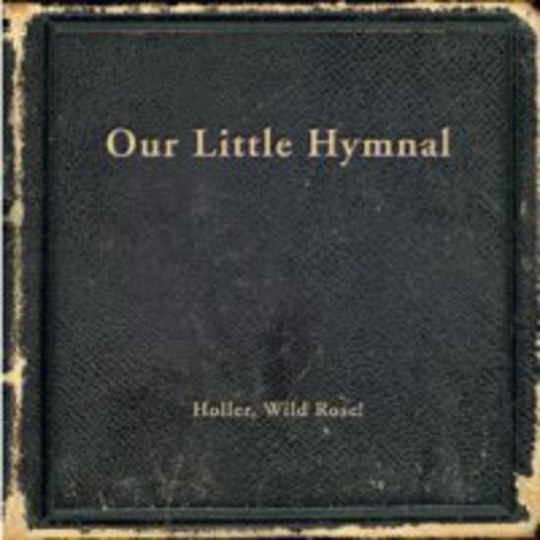 The album opens with one simple word...

What follows is a bone-crunching cacophony of noise. Guitars that sound like whole orchestra, drums that punch you in the stomach before lifting you back to your feet. This band is a unit, a whole sound, not just the sum of its parts. To pick out any particular sound is a difficult procedure: the instruments are melded together, as if held by an invisible force. And this is all in the first minute of Our Little Hymnal, an album of intense highs and beautiful lows, uproarious noise and somber laments.

Opener 'Holler, Wild Rose!' is a microcosm of the whole album, a massive cacophony followed by periods of calm. 'Marylawn Hair' _is Jeff Buckley's 'Last Goodbye' covered by _Loveless _period My Bloody Valentine, guitars made to sound like violins and crashing drums hitting the vocal melody like waves caressing the shore. _'Mercy Beat' is a different animal entirely, a bluesy hymnal underpinned by rolling drums and vintage guitars. The quieter moments are beautiful, the range of vocalist John Mosloskie coming to the fore, the melodies permeating even the thickest skin._ 'Captive Train' _is much the same story, twisted blues with a heady, highly emotional feel.

There are heavy hearts on this record, but not from the usual, and ultimately casual, pain of minor heartbreak or everyday troubles – it’s something altogether BIGGER. It's almost a national pain, a shared malaise that trickles through the music inspired by generations of other American musicians. From the communal pain relief of gospel, to the disenfranchised anger of the blues right up to the personal inner torment of Buckley and Cobain, music from the US has a shared heartache. Having said all this, don't make me paint this record as a morbid exercise in grief; it takes this feeling and magnifies it until it becomes uplifting, a celebration if you will. As the album rolls on, you get the feeling every note played counts and every word uttered means everything. The epic length of_ 'Poor In Spirit'_ should indicate some filler but the song's length only intensifies the tension and irregular structure, giving the song room to breathe outside the limitations of the three-minute pop song. There's room for experimentation, expression and ultimately beauty.

'Sun Vines' _is what Cold War Kids would sound like if they had listened to more shoegaze records and less Robert Johnson. 'Thief In Our Bed' _takes the tempo down with ghostly aplomb, creating, in my mind, a cinematic story of closeness breading contempt, lovers slowly torn apart by themselves and their own flaws. There's something unsettling yet comforting about the choral vocal, an otherworldly and almost inhuman voice that glides effortlessly over the tumbling drums. Closer _'Promise Braid' _is simply breathtaking, a mix of dub bass and delicate vocal fragments. The moments of near silence serving to heighten the impact of the sustained notes that are seemingly beaten out of the band. It's a controlled end after a hectic start.

The sheer pomp and general size of this album could put the casual listener off; for those who like a touch of pomposity, however, it truly is a wonderful piece of work. Our Little Hymnal takes a million different influences and condenses them into an hour-long masterpiece, said influences only part of a tapestry not the whole story. If you love music with a touch of the epic this is the record for you: an album that is simple and elegant, yet powerful and primal at the same time.