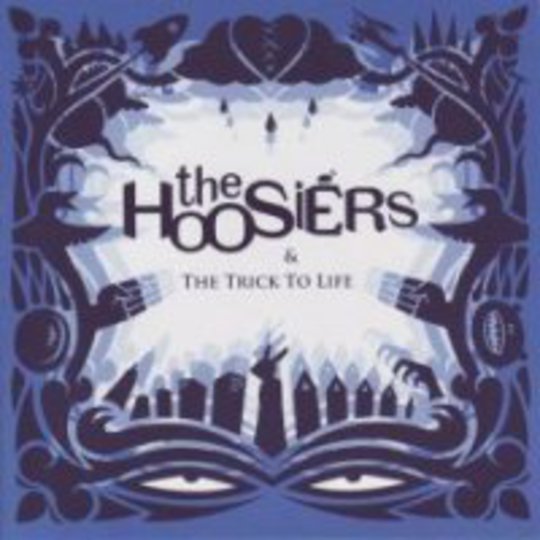 The Hoosiers are a band formed with the apparent underlying belief that, in these times of international brouhaha and domestic strife, we all need a good cheering up. This may be true, but I kinda doubt that the gaiety of the nation is gonna be raised by a dude who sings like he's been crowbarred in the balls fronting a Supernaturals tribute band. No matter how many wacky costumes they wear in their video.

There's really only one strong impression that seven or eight listens of The Trick to Life leaves you with: the overriding belief that we need to form a pitchfork-wielding mob, track down Sean Rowley, and deliver instant vigilante justice via some sort of power tool. There's no explanation for why bands like The Feeling, Scouting for Girls, and the assorted selection of muggins here who make up The Hoosiers have decided that the future lies in taking all of the over-bloated blandness of ‘70s AOR radio pop, and none of the, y'know,_ actual tunes. The chart hegemony this is leading to, where eventually every third top-40 single will sounds like a seventh-generation tape dub of _Breakfast In America reformatted for ringtone suitability (i.e.: loud, flat, and with no subtlety of production whatsoever) is beginning to make me nostalgic for the chart glory days of The Horrors, The Others and, I dunno, British Whale.

There's a forced, rictus smile about everything The Hoosiers do, like the faces adults put on around children so they don't realise that their parents died earlier in the day. It's never less than jarring, and when it comes to a song like ‘Goodbye Mr A’, which is meant to be about a near-Fascist 1960s comic book character, just baffling. The level of Virgin Radio Drivetime non-attitude The Hoosiers apply to the topic would convince you that they were singing about Little Plum.

‘Cops and Robbers’ is the world's worst ‘Lovecats’, ‘Worried About Ray’ is the world's worst ‘Happy Together’... and yet it really is preferable that The Hoosiers make their career path from wedding reception band covers because they really go off the rails when left to their own devices. ‘Worst Case Scenario’ being a case in point, an attempt at an indie-du-jour high octane busking number, which sounds like the same sickeningly sweet bullshit that forms the rest of the album, just with a different guitar tone. Frontman Irwin Sparkes, incidentally, really does have some of the most horrid vocals to have achieved a record label contract in a long time, an awful hotchpotch of Justin Hawkins-style wild flailing for high notes and some of the most bogus intrusive rs you'll ever find on a CD.

The whole mess ends with a seven-minute faux-prog piss-about entitled called ‘Money To Be Made’, where Sparkes points out "Keep up the charade / There's money to be made", and it's at this point you realise that not even self-awareness is going to save The Hoosiers. The track fizzles out, unnecessarily, in three minutes of orchestra strings and spaceship noises. As with everything else on ‘The Trick to Life’, there's just no need for it.

Despite their intentions, nobody other than the left-hand side of the bell curve will be left happy by The Hoosiers. Despite all of the tricks, the ‘light-hearted’ song topics, the ‘sly’ lyrics, the ‘cheekiness’ of sound, their wackiness isn't even aggressive enough to be confrontational, like Ween or the Barenaked Ladies or whoever. This is the kookiness of an xkcd comic strip, the kookiness of a joke told in the 23rd minute of a best man's speech, the kookiness of, yes, an office joker. A very polite, socially awkward office joker. The Trick to Life is nothing more than the audio equivalent of a "come in fancy dress" Comic Relief event in the offices of a call centre in a Sandwell industrial estate. And nobody needs that.