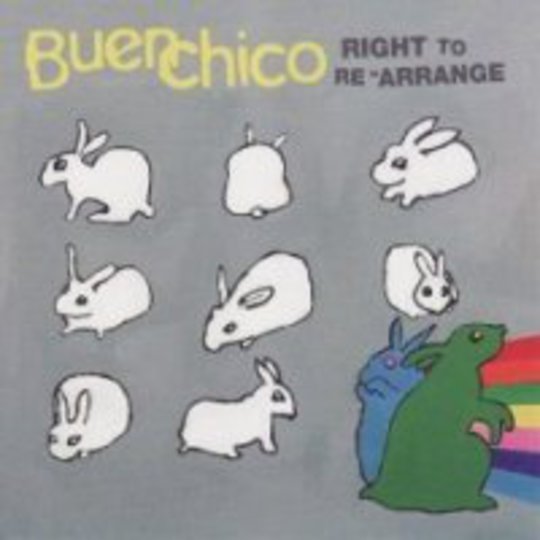 Buen Chico, in case you were wondering, means ‘good bloke’. Which if you ask me, is a bit of a shit name for a band. It conjures some rather nasty images of charva-like indie rock, but don’t fret: this is fairly simple pop music with some interesting flourishes chucked in for good measure.

Despite coming from Leeds they display a faintly American pop sound on occasion, with lead singer Morgan Tatchell-Evans’ vocals Shins-like in their soaring cadence. Opening track ‘Choosing My Religion’ displays a perky melody, while ‘Giving Your Gifts’ is more frantic with zippy guitar lines. The verses of_ ‘Great Pleasures’_ sounds like a more melodic (e.g. better) Kaiser Chiefs without their annoying let’sgetallthewordsoutasquicklyaspossible, sowedon’tseemboring sensibilities; ‘Turning Myself Red’ features a lovely chiming guitar, multi-tracked vocals and subtle bass; the indie ska of _‘Laying Down The Law’ _is apparently about the hypocrisy of politicians (it’s better than it sounds), with some nice backing vocals from bassist Kirsty Dolan; while the delicate, faintly punky sound of _‘Gold From Lead’ _once again showcases Kirsty’s pretty voice with sighed harmonies over driving rhythms and the swaying melody of Morgan’s vocals.

‘Don’t Lose Your Faith In Goodwill’ is marvellous – from a gentle opening it morphs into an epic shout-along, with Pavement-style changes of pace;_ ‘Drip Drip Tick Tock’ _displays a punky bassline with quirky guitar lines, the shared vocals once again enhance the track, but I’m starting to get a little bored with Morgan’s slightly samey-sounding voice – it’s excitedly strained most of the time, and you can almost imagine him standing on tip-toes stretching to reach the notes. It’s a minor niggle though, and overall if you’re a fan of uncomplicated indie pop this wouldn’t be a bad buy.

So, in conclusion: shit name, good songs. You win some, you lose some.