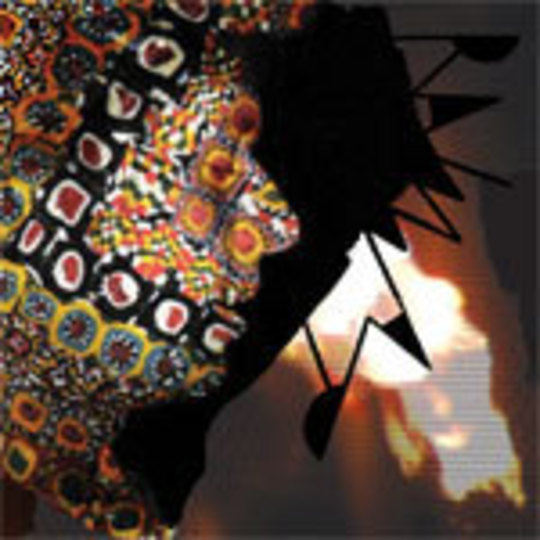 “We always wanted our shit to sound like something from the radio and then on _God's Money we freaked out because we always heard it as sounding like a Timbaland track or something and instead it sounded as if it was recorded like a garage band.”_ - Tim DeWitt [source]

It's surprisingly easy to imagine this Brooklyn band under the Timbaland treatment. Surprising 'cause, despite their moniker, Gang Gang Dance are more likely to challenge you to find new ways to stroke your chin than to dust your feet on sticky dance floors. Even though this, another stopgap between 2005’s God’s Money and whatever it is that comes next, is considered stripped back by their standards, it’s still so thick by anyone else's.

Dense with subjectivity, Rawwar is a sweaty pantomime of nudges and winks which their neo-tribalism handle would, on first thought, seem to render empathically redundant. Take ‘Nicoman’, the record’s first track. The ambiguity felt in trying to place it makes your head ache and your guts wobble, ‘til you realise that for Gang Gang Dance this isn’t _just an exercise in musical theory – hypothetically breaking music down to its most basic components; like minimal tech, dubstep – it’s actually an attempt to do that and more; rebuilding a shrine to melody, rhythm, blues and freqs cast in their own image. In this way Gang Gang imagine that they are dangerous; treacherous almost - like a secret society meet in a midnight thicket. It’s a woodland they built themselves, mysterious loons - shame that too often on _Rawwar they leave us to light the camp fire, leaving their tracks free of light and heat. But then, I suppose, this is supposed to be a Gang Gang.

The production is something that concerns the band, and in particular percussionist Tim DeWitt. Here, on the apparently abandoned sessions from the next record, the studio hasn’t done much to illuminate. Slightly damp, its humidity is – rather than an easing, seductive draw – close and obtuse as a heavy grey sky. Still, there are beams of light lasering their way down like divine totems through the cloud. ‘Oxygen Demo Riddim’ makes rare gains, achieving a kind of lucidness through sepia-tinged autumn Saturdays; Barrett estates tarted up with wine-painted eyes, blotted streetlights and the gush of running gutters. The clouds break halfway through and Gang Gang get cleaned up – the dubstep’s back, lighter and mid-tone – prancing, tribal, primal, ‘Dancing in the Rain’ looped through machines. The quartet inject drama into the mundane.

And they are – dramatic, that is; 'Nicoman' in particular showing the influence of Bollywood film scorer AR Rahman. Despite a fleeting bridge that picks up a more typical, M.I.A.-ish Western rhythm, the other stages of the first song are off-kilter and suspicious by their distance from what passes for a normal beat. It may be confused, but it’s always at least half exotic. Barrett vs. wine; Nico vs. Man; fresh rain slamming against Brooklyn pavements. Even if the execution is muddled at times, the sheer weight of thought and ideas means Rawwar is always at least half intriguing. It's up to you to plot the Venn diagram showing how far that exoticism and intrigue infringes upon what remains of Rawwar's territory.

Closer 'The Earthquake That Frees Prisoners' keels and twitches with nauseous samples reminiscent of the same voices that haunted cLOUDDEAD’s work. It reminds me of something from the last album, though less focused. This lack of focus is, along with the production, what takes that sought-after Timbaland gloss from Rawwar. To break something down to its fundamentals, then to recast, polished, you need to have a clear idea of what you're building before you let ambiguity leak out. You’ll find here - amongst the rubble tip of sound - rhythms, melodies, even reverb effects that are innately brilliant. But for all their iridescence and the band’s talk of 'pop', Gang Gang remain an arcane, evasive mystery.