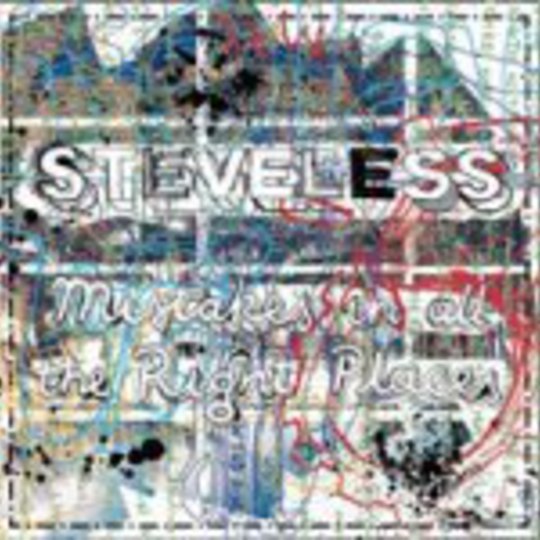 Comfortingly horrific, Steveless have created an opus that defies logic and fashion, ably straddling the divide between terror and hilarity quite perfectly. At only 19 minutes long, one might accuse Mistakes In All The Right Places of being lightweight, but a quick listen will sort that out (listening ROCKS!). Seriously, listen to it, it'll shit you up. You can almost hear the cogs of irrationality turning anti-clockwise in the brains of these cack-handed fuzz-pop maestros. Some might proclaim them the logical successors to Mclusky, but that's too… logical. And also the last time you'll hear them compared to anyone else in pop music.

The opening lounge area piano of 'On A Dream About Yul Brynner' is merely a ghostly slow-down of the sick mental freakishness of what's to follow. It lollops directly into 'Paz', which features a languid vocal display akin to Grandmaster Gareth of Misty's Big Adventure being raped by Sam Raimi in 1982 and some dirty fuzz stabs that could only be described as 'joke-math' (maybe that wasn't the last comparison). Within this, we see that the one element that remains throughout is a terrific sense of the ridiculous. There's a distinct Ivor Cutler-ian vein entrenched in the logically illogical wit and homespun production values that is, for an album designed to fuck you about, immensely charming.

A glance at the sleeve (do this after you've listened to the record, you've only go to wait 19 minutes) shows exactly how much work has gone into this micro-paean to being a clever dick. Besides being able to see the hilarious lyrics (a highlight of which reads "I had no way of quantifying, so the chart I had drawn was a waste"), you can see a formal apology from the band for actually having a member called Steve. Again, we can see that the function of Steveless is governed more by a need to create their own laws and stick to them (and apologise of they are breached) and also to ensure that they are as unaffected by anything external as possible.

Any longer, and this release would have been overdone. Any shorter and it would seem too much like an assault. As it stands, Mistakes In All The Right Places is a gem, perfectly immersed in itself without being too self-involved, and containing the correct pinches of humour to never let this become too self-involved. It is self-aware, but only in a way that enhances the connection between band and listener. And it helps that some of the tunes utterly fucking kick. Turn it up and forget you ever heard of pop music. This is better.