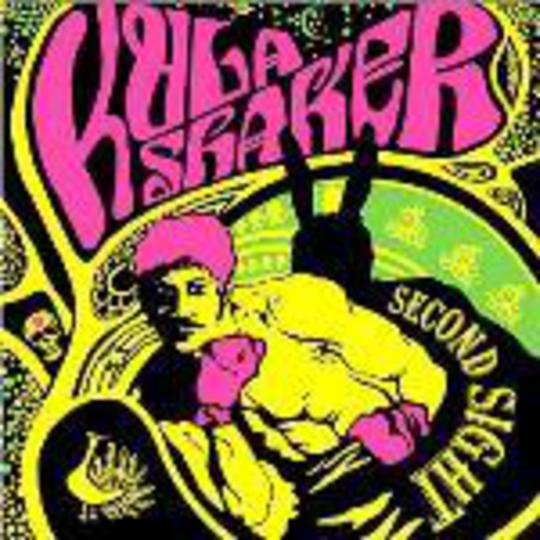 Sometimes you’ve got to swallow a little pride – if that’s what it is, clogging the throat against a man’s better judgement – and admit that a band’s against-the-odds comeback is actually welcomed. Yes, money is obviously a necessity, one of a handful of factors informing the catalyst behind a regrouping. But Kula Shaker? Relevant today and still in possession of an audience sizeable enough to prompt the release of this, the make-or-break (again) Mark II debut single? Who’d have thought it...

‘Second Sight’ is immediately appealing - it's deliriously and stupidly brilliant, familiar yet jumbled like a jigsaw left to playful cat claws. Forget the fact that it sounds like some acid-tripped ‘70s jam band mixing up the mystical with the magical and toking themselves into a heady stupor prior to depressing 'record' and letting those good times roll and just go with it yourself. Forget, more importantly, that Crispian Mills still looks like the smug dickhead he almost certainly was at the band's peak (although his turn in this song’s accompanying video is endearingly well-humoured). If this arrived signed and sealed by Dungen, super-hip internet nerds would be blogging the absolute shit out of it rather than pouring scorn and scepticism atop its sleeve.

Okay, backtrack a little: this isn’t really brilliant. Or, rather, it's not as marvellous as the above paragraph of deliberately provocative language made out. It _is_ a lot of fun, though, and earned more than its fair share of praise from office-bound DiSsers immediately perplexed both by its firm rooting in retrospective radio rock of a couple of decades ago. Trippy hippies Kula Shaker may not be these days, but there remains a powerful influence in their songwriting that surely stems from the mumblings of some voodoo henchman, housed somewhere in the basement of a shadowy record executive’s swank pad.

I said swank, just like he said fakirs. Now shush it, smile broadly and accept that one of the bands so many of us love(d) to hate have returned with a thumbs-up single that's sure to catch more than a few haters off-guard. Bravo, then, gentleman of the Shaker. Just don’t be coming at us with all that ‘Tattva’ bollocks again, or this pride’s going right in your faces.