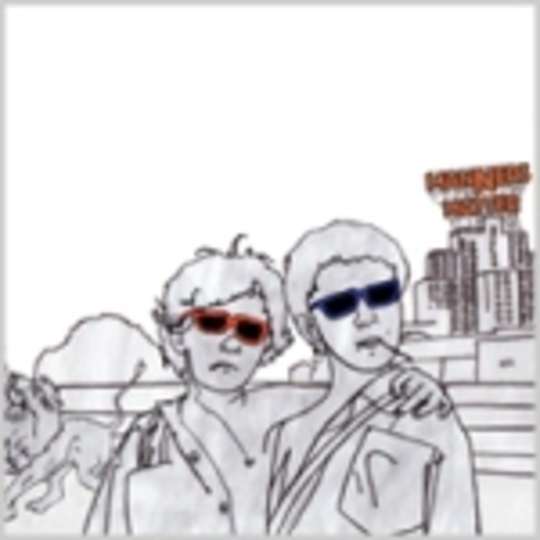 Whether you've ever heard of them or not, New York's Mancino have their sights set on that regularly-pulsating muscle that just happens to be the epicentre of the physical human body and yet is continually said to have influence over the emotional side of life: the heart. Not, you understand, because their business is sloppily conceived and poorly executed poetry, but because although Manners Matter might appear on a first listen to be a competent pop record and little more, give it repeated spins and a wealth of warming melodies and cute jangles become evident.

Like a less-experimental Beck, the trio of Michael Grimes, Nadim Issa and Jonathan Mason seem to revel in layering slightly unusual sounds over an otherwise solid pop structure. The minor key lament of 'People We Meet' is slightly more disconcerting than might be expected of a veritable feast of vocal harmonies and swooning guitar lines as it mutates from gently brooding into something altogether lovely and overwhelming, in the sense that emerging from a dank tube station into the cool breeze of Hyde Park is lovely and overwhelming. 'The Anvil and Me' wobbles along plaintively with an Animal Collective-lite touch that is present throughout Manners Matter. It's not challenging by any means, but then again it’s not meant to be. It's purely decorative and exists solely to entertain.

Unfortunately, their strongest weapon – the schizophrenic dalliances between styles and pop themes – also proves their downfall. 'Definition Of an Accident' swerves from something sounding like an offcut from the Bugsy Malone soundtrack (seriously) but ends up some galactic, swirling opus that feels like wave upon wave of tinkly sounds crashing upon your shoulders. And then, in a Keyser Soze-like snap of the fingers, it's gone and doesn’t reappear. If only Mancino had concentrated their pop sensibilities into more coherent songs this could have been quite a special album. As it is, it's merely pretty good but suffers from having three rubbish songs tacked on at the end.

'Monster Trucks' is pure filler, a clogged mess of a song that starts off pedestrian and goes nowhere. It's far and away the most structurally staid offering on the album and as the muted guitar fades away the only pervading feeling is of a song whose sole role is to make the laboured 'Buy My Product' sound less contrived. And 'Motels', which closes the record, is entirely devoid of the magic touch that makes the majority of the album such a delightful triumph. It meanders mundanely where Mancino previously lead you by the hand and show you something wonderful, and only goes to highlight the quality of three-quarters of Manners Matter.