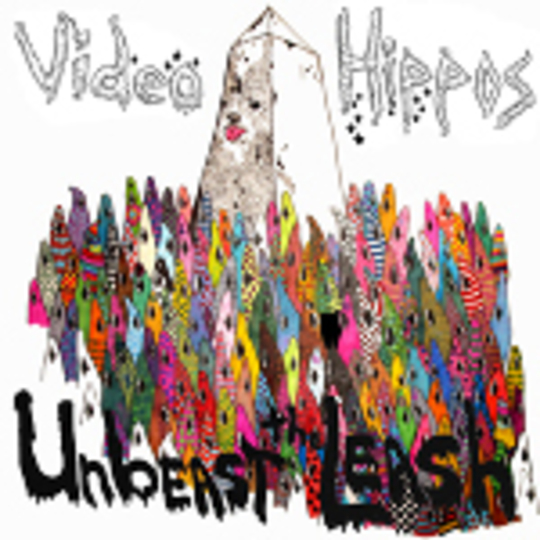 Baltimore’s Wham City collective has certainly made its fluoro-presence known of late across the indie corners of the internet. Dan Deacon may currently be blazing a path across the globe as the collective’s de-facto figure head, but a quick look at Wham City’s website reveals a hyper-coloured assortment of bands, artists and filmmakers collaborating together in the creation of music, videos and even an online talk show. A seemingly never-ending band of misfits and mavericks united by a shared love of recycling mass entertainment, they appear to be hell bent on producing something new from discarded relics of mass production, abandoned warehouses spaces and whatever else they find in the bin with a near childish glee - early efforts even involved a live action performance of Walt Disney’s _Beauty and the Beast _in its entirety.

If it’s an all-inclusive, childish aesthetic that defines Wham City, then Jim Triplett and Kevin O’Meara’s Unbeast the Leash, their debut LP as the Videohippos, represent the collective’s moodier adolescent side. Picturing a kinetic, neon clad duo expressing a simultaneous love and disgust for the steady diet of ‘80s and ‘90s sugar-coated trash entertainment they were weaned on, the pair’s work brings to mind bits of The Strokes, Blondie and a bargain-bin New Order with the ‘Ceremony’-aping opening of ‘Bear Fight’.

Doing their best to hide a strong pop sensibility behind a wall of fuzzed-out guitars, charity shop electronics and monotone vocals, the final result is a surprisingly downbeat affair for members of Wham City. Even the GameBoy style gabba beats and dolphin noise samples of ‘Dolphin Sick’ – which on paper reads like a winning list of ingredients for crafting upbeat noise pop - are soaked in a droning melancholia that, no matter how fast or driving the rhythms are, runs rampant throughout the entire album.

But that’s only a partial critique. Unbeast the Leash _does suffer from a lack of the instant highs and lows we’ve all come to expect in today’s internet-addicted music culture, and the songs do bleed into each other until it’s difficult to tell which is which. Yet for an album that clocks in at just under half an hour, its repetitive, downtrodden nature is also where its strength lies. Far from life affirming it may be but, given room to breathe, _Unbeast the Leash’s tightly wound mood provides a hypnotic distraction from the grey drudgery of daily routine. And occasionally, that’s all you really need to hear.