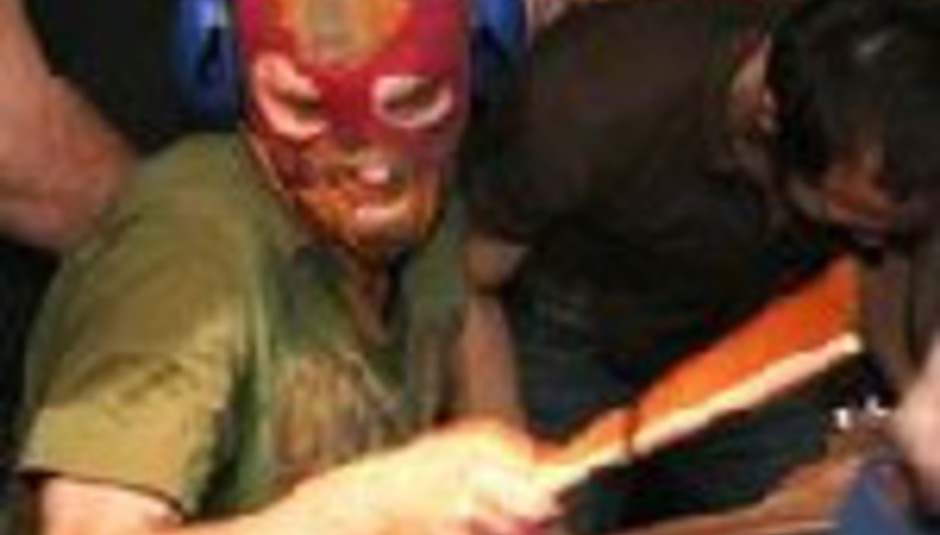 Japan deprived of greatest live band in world. Dag, yo.

Rhode Island residents Lightning Bolt - inarguably one of the greatest live bands in the world - were rejected from entering Japan last week, for a ten date tour. The band posted the following via a Myspace bulletin:

"Upon arriving at Narita Airport on the morning of May 29th 2006, Lightning Bolt was ushered into the grey windowless immigration offices. Japanese immigration officers had information on the band down to which Brian played what instrument, amount of albums out, ten-day tour schedule, which shows were sold out, plus photos of the band. There was no hiding. They had been waiting for us. The internet, your best friend in researching everything had betrayed us. Beware. We were officially rejected from Japan, (and) we offically appealed. We spent 48 hours in the "rest hotel" on the mysterious sixth floor. Our translator, the good humoured "mister ..47", delivered us to our quarters. The humid, stained room was no good companion. The phone was removed. The window didn't open. A revolving security guard was posted outside all the time. We could not leave. The lampshades in the room where graphittied (sic) in a wide range of languages. If a friend hadn't dropped my camera in a toilet I would have taken pictures of them. I love convenience store ume plum triangles but you can only eat so many. If only there had been a mosburger. Burdock root sandwich. We awaited the decision."

"We were re-rejected. The room cost us 750 american dollars a day. Such hospitallity. We had no choice. Pleasant, polite guards escorted us right to the doorway of the plane, we smiled and waved. One of them bought Brian G a water. They wished us good luck in getting the process right next time. Which we hope to do. Twenty-one horribly uncomfortable hours later we arrived in Boston. In a downpour. Lightning bolts flashed in the distance as Load Records' Ben drove us to Providence. He had bought us cookies."

"We are very very sorry we did not make it to Japan this time. Really sad. No one was ready for the level of vigilance at the border. I miss Japan, all the awesome toys I will not get to see. All the amazing friends. Be nice to Mucid Cuspidor and his assistant while they are there. We'll be back."