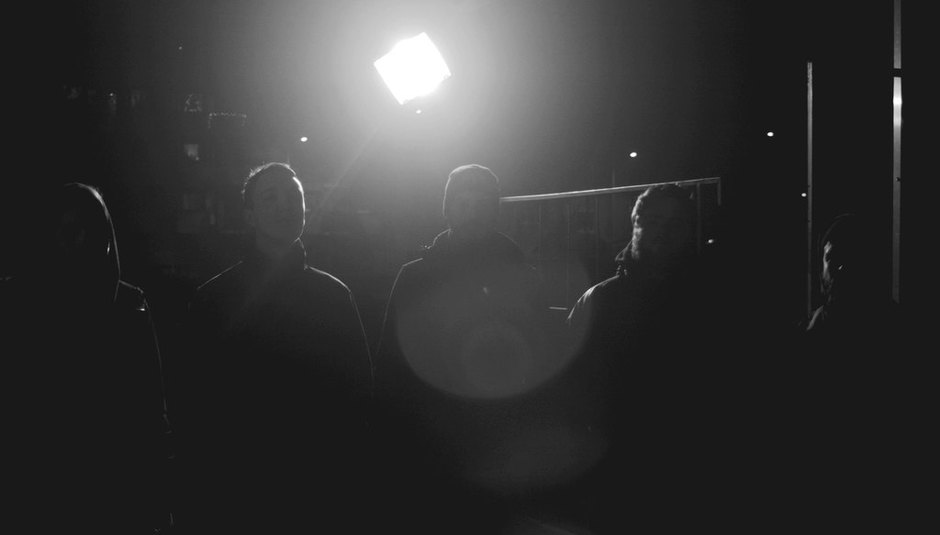 Under the auspices of The Reptile Shrine column, which recently brought you a round-up of 2015’s best Black Metal releases, DiS presents an exclusive stream from slow-motion Hungarian hardcore band Oaken, on the eve of the release of their debut LP.

We also interview the enigmatically named G and D from the band, who guide us through the LP and talk about their inspirations, influences, live shows and the Hungarian scene.

Oaken formed in Budapest in 2012, collecting several members from various hyperactive screamo bands to form an orchestral sludge outfit. King Beast is the band’s fourth release since they began. One a year – which is pretty much the pace this record moves at, until it starts raining hammer blows round your head. At its core, you can feel their past bands bristling to rush out, but weighty, patient atmospherics hold them to a stately, grandiose pace, to be revealed during only occasional flashes of contrasting surges.

The first track, Monastery slow rolling punch of a riff, lurches and uppercuts with a mix of spoken, barked, screamed and roared vocals. Killing Fields is a landscape of barren ambience. There is drone and reverbed drums, and the ominous clang of bass and background hum. As it progresses, the droning intensifies, beats increasingly fill the space, and dissonant peals of guitar punctuate the atmosphere, slicing through the thickening murk. Third track, The Hyena is possibly the standout track. It heaves and rolls with a rhythm straddling doom and hardcore, then drops out to shimmering mid-section haunted by a female vocal that continues to radiate through the chaos as the guitars and drums batter their way back onto the soundstage. Damnatio Memoriae is the monstrous closer. It slow-burns everything into a charred landscape of oblivion.

Listen to the stream below, and get it on 12” through Alerta Antifascista Records on 20th February. Pick it up here

INTERVIEW WITH G AND D FROM OAKEN

DiS: What are the songs on your album about? Could you guide us through them?

G: Yeah, sure. King Beast is about the force in the world that leaves only ruins and loss behind. When this power is present it has an impact on humanity. Each of the songs is about a leader from the past with who I can connect this theory.

The song structure of Monastery, the first song, is like being in the head of a person with extreme mood changes and tormenting visions. This wasn’t planned but at the end it matched the lyrics perfectly. There is little if any prelude and no long transitions between parts also we have used a few synths, pedals to produce some extra noise.

Next is Killing Fields which starts with a long dark ambient part. You must know that from the five members three of us plays drums as well. So if it gets to percussions we can get a bit carried away. In this song you can hear eight toms, tambourines and some other percussions. We also used the last interview with Pol Pot whose life events inspired this song.

The Hyena was the last song we finished. It took also the longest to write. We played the intro first at an acoustic show and It came out good so we decided to build it in the record. Nora Branovics is a super talented singer who helped us before. Her recording session was amazing to hear. It was silence in the studio. Our other friend Csaba Kósa does chilling throat singing of all sorts, he also played sound bowls and additional noises on the record.

Damnatio Memoriae is the oldest of the four tracks. It gave the base for the writing process in the rehearsal room. It was a new experience, more time consuming but at the end of the day sometimes you get more job done this way.

DiS: As a band, where do you draw your inspiration from?

G: Most of our creativity comes from listening to music. There is a crazy amount of talent out there that it is hard to follow the pace. Also a good read or a documentary can provoke something. The main inspiration for me to create, is the impotence of the human experience. Though playing music together gives us a lot of joy this band would have no reason for existence if we were satisfied with the world as individuals. I don’t mind the `we turn bad feelings into something good¨ idea about making music but I’d like to think this is more complicated than that.

DiS: What are the themes of your lyrics?

G: We wanted this record to be powerful, monumental and more coherent than our previous materials. We had a conversation in the tour bus about how amazing it is that one person can have immense effect on large number of people. An inventor or a hero can change the way we live, perceive. This is a huge power. On the other end of the spectre there are those malicious figures who have total disregard for others and their ego, belief cause injury for most of the society. After a bit of research I narrowed it down to four historical figures: Ivan the Terrible, Pol Pot, Idi Amin, Nero. Their unique life and sometimes absurd reaction to situations offered the raw material for the cover as well. These are not history lesson like lyrics but what seems like a creepy metaphor might be an actual life event. Though these people have made obvious damage to humanity my aim was not to simply criticize them but to show the evil power that can appear anywhere.

DiS: You refer to your band members with single letters instead of names. Is this an artistic anonymity? Do you feel it is not necessary to have human personality in front of your music?

D: The important thing in Oaken is the music itself and nothing else. Our names are useless information here though we don’t want to induce some kind of obscurity with this. It just didn't really matter to us when we were setting up our page.

DiS: How long have you been playing together?

D: We started this band in 2012, at first it was just the two guitar players putting some ideas together, but this soon turned into a fulltime band. The whole idea behind this was that wanted to do more heavier and darker stuff than in our other bands.

DiS: Have you released anything else before this album?

D: King Beast is our first full length release, but we had put out a split CD in 2012 with Wolf Shaped Clouds from Hungary; a four way split LP with Locktender, Coma Regalia and Wounded Knee in 2013; and the latest was a split LP with Marnost from Czech rep in 2014. Beside these records, we had one song, our shortest one ever on a compilation CD called Short, Raw and Ugly in 2013.

DiS: What live shows do you have lined up?

D: Yes, we go on a two-week tour in the middle of May. Also we are booked on a few festivals this summer. We are planning to do a proper album release party this time. Since there are contributors on the record and a lot of instrument was used we thought it will be interesting to play once the record live from beginning to end.

DiS: And what can people expect when they come to see you play?

G: Well we obviously like to play really loud and live in the moment with the music. We play on two guitars, bass, drums and I use one floor tom, cymbal, tambourine and a synth. We don’t stop between songs. If something has to be said it can be done at the end of the set but we want the concert to be a special time. It’s mostly peaceful audience, everyone is concerned about the music at our shows.

DiS: There are some fascinating moments in your record, that are hard to place into any genre. Doomy blackened riffs seem to melt into ambience. and your female singer really adds an intriguing extra element to the sound.

G: Thanks! We try to keep things interesting yet dark and not just play a mixture of two or three genres. Because we played for 10 years in different kind of bands, our taste is similar we can work out the details very fast. The female vocalist you heard was Nora she just helps us out on the records. She did an amazing job for us in the past but in King Beast she really outdid herself.

DiS: What are your thoughts on the kind of music you play in general - what other bands do you like, and what kind of presence do you think this type of music has in the world?

G: Bands like Neurosis, Converge, Majority Rule have a distinct sound and it felt inevitable to listen to them for the first time. Following trends, a kind of tuning or technique will just turn the whole thing into a contest. If an atmosphere is made with soul and honesty. It can be a very strong experience.

DiS: What is your music scene like in Budapest? Are there many like-minded bands? Are there others playing similar music to you, or do you feel you have a unique sound?

D: The scene in Budapest is quite alright at the moment, and it’s getting better. There are quite a lot of good bands and there's more and more good shows. I wouldn't say that we have a unique sound, we just try to mix everything that we like. There are some bands that are on the same path as we are like Rivers Run Dry, Torn From Earth.