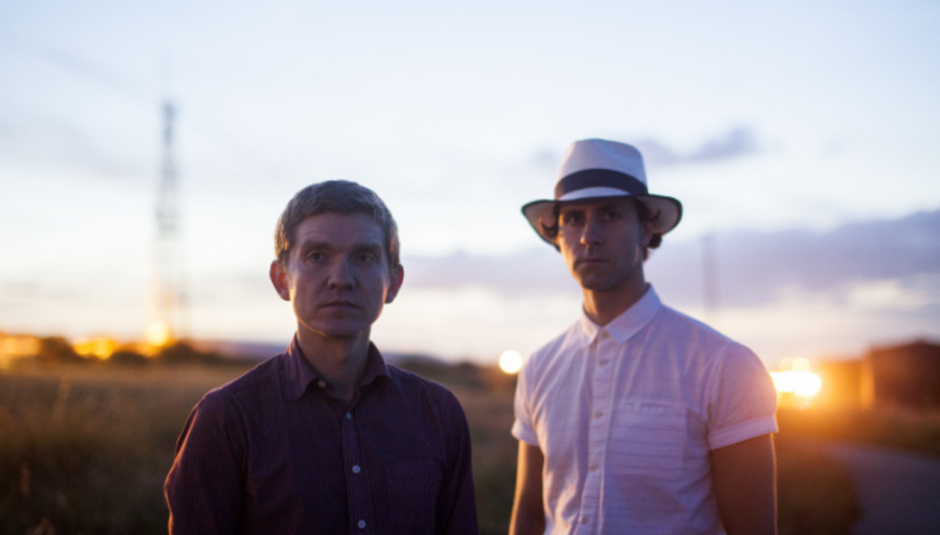 What do you get when you mix two of the North East of England's most beloved souls? The answer to that question is Frozen By Sight, an album by two indie welterweights.

It's a mixture of travel-writing from that eloquent hat-wearing singer chap from Maximo Park (Paul Smith) and him from Field Music (Peter Brewis) making sure the strings soar and the double bass burbles beautifully, which sounds exactly like this...

Frozen By Sight is released on 17th November via Memphis Industries, and rather than us waffle on about it, here's Peter Brewis' Track by Track guide to the album...

Paul had a fragment of a song - four or five lines and a few chords which I assumed were about the old Odeon cinema in Newcastle. I kept Paul's melody just about exactly how he'd sung it and scored out some slightly changed chords for the string quartet. I then bracketed it with a fast moving riff section for the whole band to play. This is one of the few tracks where I think I tried to do something descriptive with the music. The riff sections are supposed to represent a walk-at-pace down Pilgrim Street in Newcastle. I hear Paul's lyric section as the moment he stops to look at the derelict cinema.

Paul had written the entire song for this one - full of twists and turns. All I had to do was to wrap the instruments around his voice and guitar. We'd decided very early on that the lyrics were going to be the central thing - even to the point of dictating the song structures. Because of this there aren't many recognisable choruses on the album. This however is one of the songs that does! Although we didn't want to repeat words too much we felt that it was pointless to deny a chorus when it appeared!

Once we'd started to have an idea of how things were going to work I felt able to start sending Paul some musical ideas. I wanted to be able to send him small morsels of music that he could repeat or change to suit the structure of the words. With this one, all I had was a piano riff, some string chords and a gap which was in a sort of free time so that Paul could put in whatever he wanted. The riffs start, stutter, meander and stop around the vocals. The line 'Finally the call comes' brings everything together.

I think this is the song which most obviously touches on the different stylistic elements we were talking about. It's based around Paul's folky finger-picked song but when we arranged it we had a lot of fun throwing in some quite blatant Jazz/Classical/Pop references. Paul plays a really beautiful guitar solo on this one. I liked it so much I took a few of his melodies and re-did the string arrangement.

I had a short musical idea based on a string pizzicato waltz that was in two keys at once - again the idea being that Paul would edit it to fit with whatever lyrics he came up with. When I heard it with the street cleaner character I loved it. I can't help but imagine the street cleaner dancing a weird waltz through the gutters of LA with his brush.

Paul wrote this on a guitar that he'd picked up when it was in some kind of odd tuning. Although neither of us knows what the tuning was or how to play it we'd thankfully decided to rearrange this one for piano. We wanted some of the songs to be based around the strings, some around the percussion, some around the voice and some around the piano. However, I tried to play the exact notes the guitar had played on the piano. This makes the piano part really difficult for a man who only ever got to grade 1.

I had another little funny string idea which was written as a kind of Van Dyke Parks reference. Thankfully, Paul had some words and a great melody which took it somewhere else but kept the humour. For all its silliness it's one my favourites on the record. Paul rarely refers to himself throughout the record but he does on this one and it's to great effect.

If I remember rightly this was the first idea that Paul sent over to me. It was a very noisy recording of guitar, voice and thumb piano. I don't know if the original intention was to try and make it more straightforward but I'm glad we didn't. This one really floats around whatever Paul is doing and the band has to react to that and each other. The version on the record was recorded at the first, and so far only, performance at the Sage in Gateshead. It's also the only song on the record without the strings.

I'd had an idea for a drum pattern that I recorded onto digital Dictaphone. The microphone distorted the toms so much it gave them, pretty much, a set of notes which sounded like a bass riff. We'd talked about doing a song based around drums and voice (something like New York USA by Serge Gainsbourg) but this distorted tom tom anomaly gave Paul a few tones to work from.

Paul had written this song about run-down Philadelphia around a finger-picked electric guitar part. We split the part up so that the bass, strings and piano all took their parts from it. It was just about the last song we did. When we finally rehearsed it with the band David (Brewis) started playing this 60s snares-on-every-beat drum-beat. It was thus transformed into this sparse, melancholy, soul ballad.

Paul brought this one in just about finished, and again all I had to do was wrap the instruments around the guitar and voice. Despite the stops, starts and sections of free-floating tempo, there's a very recognisable song-structure to Trevone. I hear Paul's line 'Side-step and the whole world appears' as the motto for the album. We've given it a deservedly triumphant treatment here!

To end things on a less triumphant note Paul wrote some new words to my little out-of-key lullaby tune. They describe the sights around the Metro station near to our studio in Sunderland. The 'glitchy river' that is the Wear gave Paul the lyric which became the title for the record.

Sponsored Post: A Free Album, The Crowdsourced Video and Anonymity