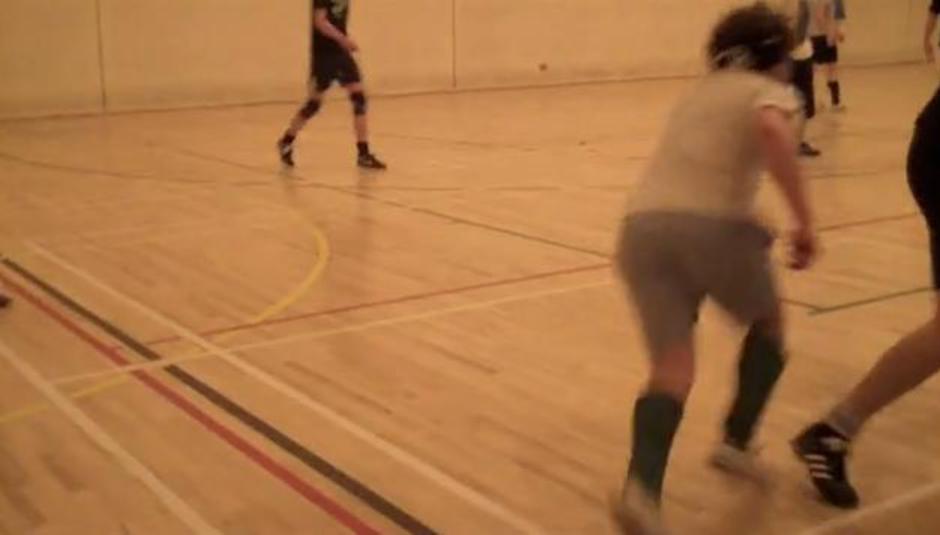 If you frequent our forums and happen to actually like "the beautiful game" then you probably won't have failed to notice that the popular indie-rock band from Sunderland, The Futureheads, challenged 'us' to a game of football.

We eventually managed to cobble together a team of elite footballing warriors via the means of the DiS 11-a-side football team, with many thanks to Arthur for his help. The match then took place a couple of weeks or so ago and, without banging on about it too much several things happened. Firstly and foremostly, Athletic Drowned in Sound emerged victorious over The Futureheads FC over the course of a gruelling 60 minute 5-a-side game, to the narrow scoreline of 17-15. Tight stuff it certainly was. Secondly, a good time was had by all.

We've just received some of the official highlights of the game, if you will, including a pin-point finish by Will Reuter-Hapgood, some lovely low-centre-of-gravity tricks and skills by Dan 'Shoot On Sight' Ormsby (pictured) and, on the other side, a back-to-front counter attacking move by The Futureheads that Barcelona would, if not exactly be proud of, at least admire.

The Futureheads vs. Drowned in Sound from theartof agency on Vimeo.

Other suggestions for DiS vs. Bands at sport. Being mostly but not completely immobile, I'm up for a game of darts, snooker or golf. Any takers? Oh, by the way, the Futureheads have a record out at the moment. We liked it. Read our review here. You can also watch them on the back-end of their UK tour, at these places: