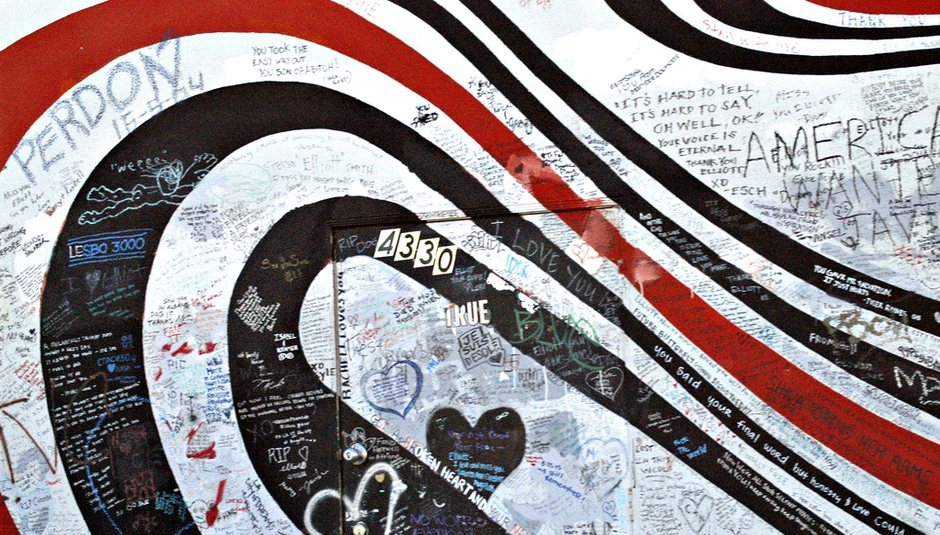 Pink Floyd's rock leviathan Roger Waters has launched a viral marketing campaign for his forthcoming The Wall: Live tour and ironically, a victim (if you want to call it that) of the promotion is the famous Elliott Smith Figure 8 WALL in Los Angeles, so reports LA Weekly.

The project involves LA street artists sticking a choice quote from US President Dwight D. Eisenhower in various locations, strategically 'cool' ones, it seems. THE WALL, which acts as a memorial for Smith, now looks something like this, leaving just a memory of what was there before. That bit with the bloke holding what looks like a scroll with the quote on is what we're talking about. You'll notice that there are also other bits and bobs of tagging also on THE WALL. It's been repainted numerous times and there are a whole heap of messages from fans of the dead singer. Looks a bit messy ALL IN ALL.

And now the quote: As one commenter on the LA Weekly Blog pointed out, you could take a different and more philosophical point of view:

"This is stupid. Everyone and their mother has tagged that thing. It's been repainted eleven times. That wall is about as moving as the window displays at Amoeba records. The only message I get is: "Someone shot a record cover here once and there's also a lot of graffiti in L.A." If it was a Shepard Fairey Mountain Dew ad no one would care."

Which appears to be a sensible point, depending on your love of a) Graffiti b) Roger Waters and c) Elliott Smith himself. Seems like a bit of a shame. I mean, I could understand if he wants to promote his tour in the heaviest way possible (not that he'd need to) but surely there are plenty of other empty spaces?