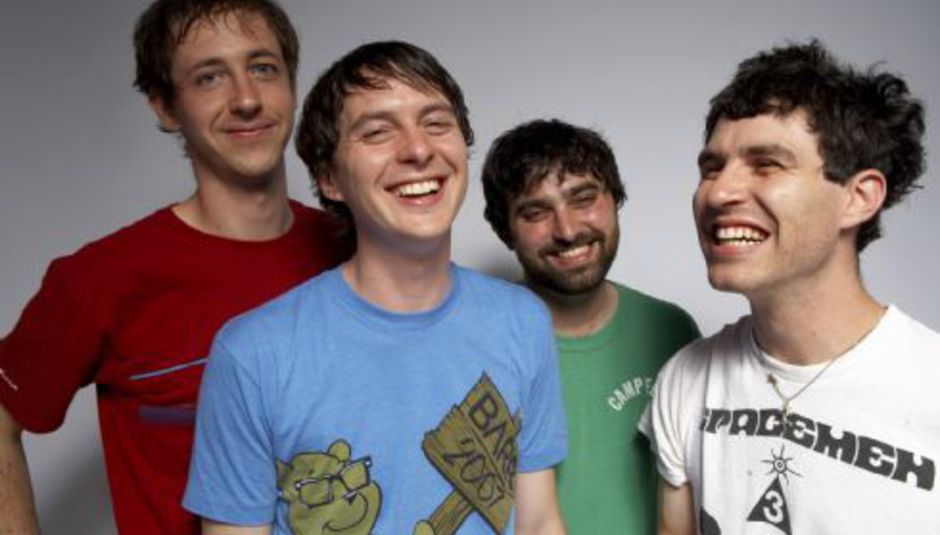 Wet the bed! Animal Collective may have already made one of the albums of the year in Merriweather Post Pavillion but that, it seems, is not going to be their only mark left on the year of our lord 2009.

Rumours were rife yesterday about a possible new AC record when a mysterious listings page appeared for a release on Amazon. Some people got excited. Probably. Some people stood up from their office chairs, emotionless.

Well, it turns out that there WILL be another Animal Collective release before the end of the year, something Avey Tare confirmed to Pitchfork earlier today. It'll be a five-track EP titled Fall Be Kind.

"It's like 28 minutes long, five songs. The title is kind of a play on "fall behind," when you move the clocks back. Everything seems to be very seasonal or weather-oriented for us this year. I wanted to keep it a little bit in line with that...But with this one, we were hoping it would come out in the fall, so Fall Be Kind. I think digitally it's probably going to come out in the middle of November, with a pre-order kind of thing for vinyl or CD for the beginning of December."

So there you have it, out in December with a digital release possibly in November. Portner also said that the songs were recorded around the same time as Merriweather and that some of the tracks have been played live already.

The tracklisting for Fall Be Kind is as follows:

The record, Portner says, is also a little darker than Merriweather, which was, at times, ludicrously upbeat.

"I'd say - not in terms of the sound, maybe. Well, the melodies are definitely darker. It's not abrasive dark or anything, but I think the mood of it has just a little bit more of a nighttime, kind of dark, sad vibe."

The band will also take a break from touring, Portner says:

"We've done a lot of it in the past two years. At this point, it's time for us to take a break. It's the most we've ever taken one group of songs, one era out on the road. We were excited and enthusiastic to go to all the different places we've been, especially this year with all the festivals. I just think it feels like a natural ending to it all."

Elsewhere in the interview, it's revealed that the band have just finished working on a film with Danny Perez. The film is untitled and is very much in the final stages, but Portner didn't reveal too much else about it, stating that it didn't really have a story and that it'd be "cool" to have it in theatres.

The next single taken from Merriweather Post Pavillion, 'Brothersport' will be out November 9.