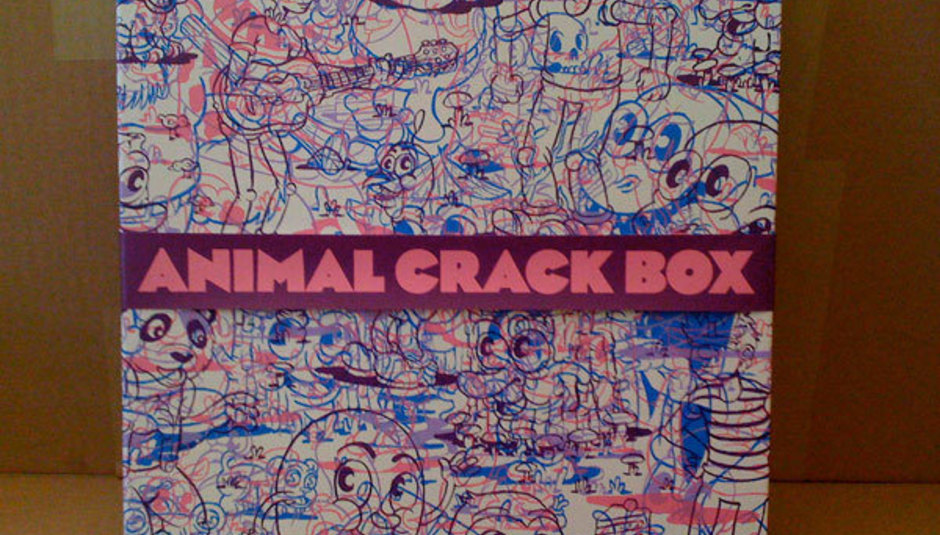 Interested in Animal Collective rarities? You're in luck, then. Catsup Plate are to release a 3xLP Animal Crack Box, featuring live recordings made during the early days of the band (2000-2003), direct to MiniDisc by AC members. The box is limited to 1,000 sets. A test pressing auctioned for charity sold on eBay for $2,425 this week - but the winning bidder couldn't pay up. Watch Catsup Plate's website for information about a relisting, should you have some spare dosh. Don't be expecting anything like 'My Girls', though...

We know you all love Deerhunter. We do too. Exciting news, then, that their singer Bradford Cox has made a couple of MP3s, containing his latest solo work as Atlas Sound, available as a free download. The .zip file linked above contains the following:

Rejoice, for the (ex?) 4AD band have announced that they will be giving away all their future material. No more CDs, no more marketing spends, no more bullshit... says them via their website:

"We, as Celebration, have felt the continual growth of web culture’s need for barrier-free exchange. We also feel that the traditional methods of releasing music have put too much distance between us. As we see it, the current music business model is crumbling. We believe their methods waste resources and time in a “print for market world” that no longer makes sense. The birth of the MP3 has dreamt the death of the CD format, and so all across the board, CD sales have dropped.

This is our emancipation. Without the need for manufacturing CDs and the danse macabre of the promotional corporate machine, we can be free to release our music when and how we want—no waiting. We know nothing of the marketing world and don’t care about the vampires any more"

Brave or stupid? You decide. Check their website for more rhetoric.

Ideas above their station? US pop-punk stalwarts Green Day, presumably buoyed by the success of 2004's concept album American Idiot, have announced their next release, 21st Century Breakdown, will be a political rock opera centred around two particular characters and comprise three distinct 'acts'. The Butch Vig-produced record also has a release date: May 15th. Which is a Friday. Seems a little odd, that, but Billie Joe and co. like to do things differently these days, don't they? Dookie sure seems a long time ago.

Another Mars Volta album? Really? Yep, apparently so. Octahedron will land in June, say the band according to Australian site Triple J. Production comes courtesy of guitarist Omar Rodriguez Lopez, and it's apparently "much more accessible than the previous four" - does that set your mind at ease? They'll be touring in these parts this summer, too.

Those literary North-East indie types have announced the tracklisting for their Nick Launay (Nick Cave/Yeah Yeah Yeahs) produced third record. Quicken The Heart is due for a May 11th release via Warp:

Admit it, you thought Kitsune compilations had to be 100% banging, didn't you? Us too. But we were wrong, as the French electro label commissioned their fellow countrymen Phoenix to compile a more melodic mix than their norm, which sounds something like this:

"These are little treasures that have had this huge impact and amazed us", say the band. Said compilation is available now.

You've gotta love Tortoise. The band, that is, not the animal. Although they're pretty cool as well. Aaaanyway... it's been a while since the last full-length from these Chicago-based experimental rockers, and we're excited. Not that they've been resting on their laurels since 2004's It's All Around You: members have contributed to various projects including The Sea And Cake, Bright Eyes' Cassadega and last week's DiScover stars Icy Demons. But the next Tortoise record is now ready, it's called Beacons of Ancestorship and will drop in June via Thrill Jockey.

I don't get Sunset Rubdown, but an awful lot of you do. So you'll be keen to hear that the third full SR release (and second for Jagjaguwar) will hit UK streets on June 22nd this year. The band say it's "Like that friend of yours who looks unassuming and normal, but once you get to know him, it's obvious he's basically crazy". DiS knows a lot of people like that. Maybe we'll investigate further.

That's not all! April 9th will see the band release a two-track picture disc (Sunset Rubdown Introducing Moonface) via Aagoo Records, featuring the tracks 'Coming To The Dawn' and 'Insane Love Is Awakening'. It'll look something like what you see below... And finally... the ex-Take That "Fat dancer" (thanks for that one, Mr Gallagher) has been talking up the chances of the group reuniting in full. The Daily Mirror quotes him thus: "The lads seem up for it and some people think it's a done deal. Let's see what happens, but my head's in the right place so the timing could be right if Gary calls. I think it would be fun". Excited? Nah, us neither. But it's news, right? And could the motivation be the fact Robbie's last - and universally derided - solo release Rudebox sold less than either of Take That's post-reunion albums? We couldn't possibly speculate.