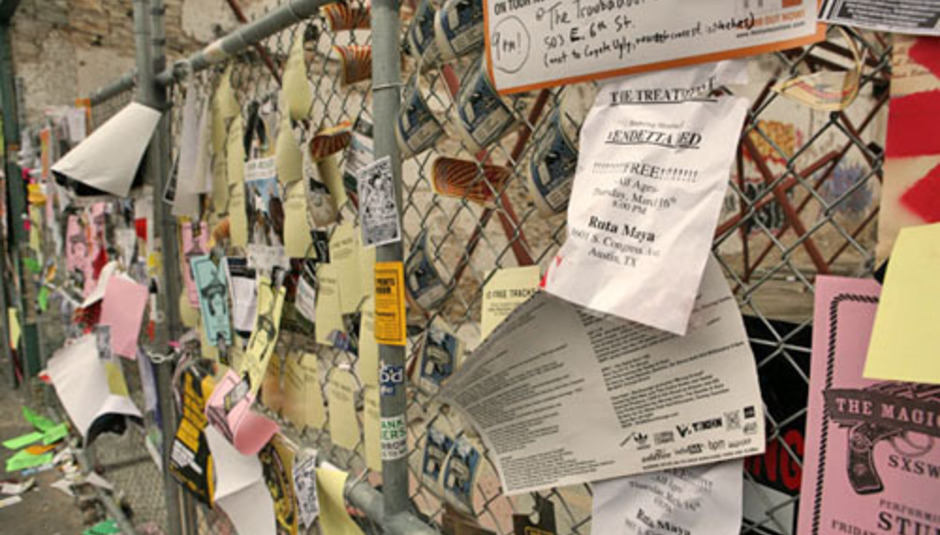 Today (Friday), Austin is hot. People are gently baking in the sun, parties are being thrown in sub-Summer weather and everyone is happy; even if our dogs are barking.

Yes, the music industry isn’t used to standing up and traipsing around for days and hours on end (we tend to sit at desks and listen to myspace all day, oh yes). Thusly, standing around, drinking booze and shaking hands is tiring stuff and our feet hurt. A hard life indeed.

Regardless, we press on. If only to honour the spirits of our forefathers.

The most popular day-time event of Friday was the Spin Magazine party – kind of like Q magazine but with Fall Out Boy on the cover – especially the mid-afternoon slot by Kings Of Leon. Showcasing new tunes from their forthcoming third LP, they went down a suitably southern-fried storm.

That was at Stubbs, and the same venue in the evening saw Damon Albarn’s The Good The Bad & The Queen play a badges-only event (essentially only music industry). Regardless of the prole-less performance, queues were snaking around the block, no doubt attributable to Albarn’s previous US success with Gorillaz.

Close run in terms of popularity was the Vice party which saw massive queues of people attempting to get in to the small Red 7 venue, given that it was a free, all ages show. Among those who performed for the oh-so-hip institution were The Gossip.

Other well-attended events were those by legendary US guitarist and songwriter Steve Earle, Australian hard rockers Airbourne and a solo set by Sonic Youthman Thurston Moore.

In addition to much of the above and amongst many others, DiS went to check out Au Revoir Simone, Someone Still Loves You Boris Yeltzin, Tiny Masters Of Today, Pelican and Do Make Say Think. And felt smug.