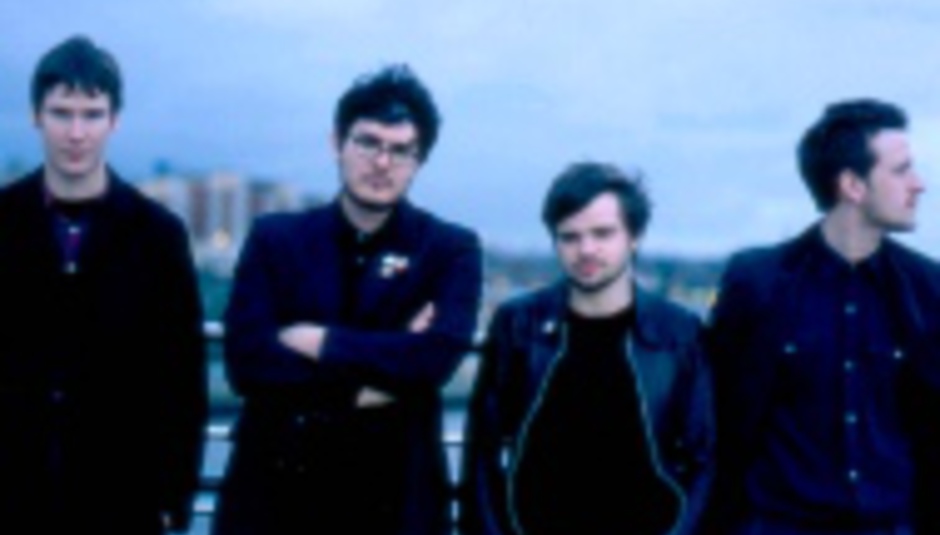 As soon as the post-alcoholic festive celebrations would allow, The Futureheads kicked off last year the Camden Barfly as part of a Queens of Noize sponsored showcase, ambitiously titled Best of 2003. Locked in the hum of all things leathery and garage rock, the four Sunderland lads stumbled on stage dressed in their finest knitted grey sweaters looking like IT consultants. Why on earth the glamorous female contingent of Kenickie were excitedly rubbing shoulders with A&R honchos seemed baffling. That was until they exploded into whirlwind of harmonies, call and response vocals and a cacophony of stabbing guitars.

Whippet-like lead singer Barry Hyde will be the first to admit that his band (bass player, David ‘Jaff’ Craig; brother/drummer Dave Hyde and guitarist Ross Millard) have had a strange old 18 months since being unsigned hopefuls to fully fledged, paid up musicians, but nepotism was never in the frame. “Our bass player, David ‘Jaff’ Craig, goes out with Marie Du Santiago from Kenickie and we know Emma (Emmy-Kate Montrose) ‘cos she works in a record shop. But it was John Kennedy at XFM who played loads of our early stuff and interviewed us before we were even signed. But you know how London works - it just means that one week all these people are going to come and talk over you at your gig, it’s not real.”

Quintessentially English in their sound, it’s almost as though The Futureheads spent hours concocting various parts for each band member to keep them busy during practice in the freezing North East winters. Now all of their Ready Brek energy has been poured into a self-titled album. “We’ve been doing a lot of writing really, we finished our album a long time ago. But it took a long time to record so we’re just excited about putting new songs into the set as well as playing older stuff. We’ll be sharpening up for tour, but we’ve been gigging loads during the year so we’re pretty tight anyway.”

And boy, do people tend to notice the tightness, with all four members participating in vocal duties with urgency and haste, it would be comical to hear it fall out of synch. “I don’t know whether that’s a good thing or a bad thing, if all people ever talk about is the fact that we’re really tight then, you know…it’s not so much we’re tighter than other bands it’s just that certain bands who you wouldn’t associate with being tight are probably quite tight. For example, and I don’t like them, take the Stereophonics - their music is very straightforward but you don’t notice it’s tight because there are no complications. Our music shows it off, we don’t deliberately set out to write really complicated music, some of it’s really quite simple and we just make it seem complicated.”

Whilst the lyrics to ‘First Day’ speaks of the absurdity of the career ladder, it could almost be about the music industry – “this is the job that people die for, I hope you're ready for the next stage, a lot of people work in the same place, don't let them get in your way.” Fortunately, The Futureheads have been able to take an objective look at their career without bowing to pressure. “We’re all really excited and chuffed ‘cos none of us have released an album before and we don’t really know what to expect. If we had high expectations we may be disappointed.” “It wasn’t a smooth ride though. We recorded the whole album with Andy Gill from Gang of Four and we got the album back and realised that we didn’t really like it and weren’t happy for it to be released. So when we signed to 679 and they said if we wanted to re-record something then we should go for it, but ‘this is your last chance’ type of thing. So we re-recorded 9 of the songs with someone else, this guy called Paul Epworth who was in a band called Lomax and we were his first proper producing job. He’s now working with Bloc Party in Norway or somewhere. But we’re really happy with this album.”

Despite such setbacks, there’s no real bitterness or cynicism detectable in Hyde’s voice, just a sense of relief, “We were supposed to sign to B-Unique last year and it fell through 15 minutes before the meeting…they just decided they didn’t want to do it anymore. We were thinking ‘What on earth are we doing? We had to go back into the studio the next day and work with Andy which may have something to do with why it didn’t come out well ‘cos at the time we were really uncertain of what we were doing and the future.”

To have won and lost and won again in the confidence wars is all part of the package in the music industry. But The Futureheads seem intent to play their own game. Promoting the album over the typically unseasonal period for gigs, they’ll spend the summer taking on working men’s clubs. If anything, their choice of shirtsleeves and polyester will be appreciated outside their hometown. “There’s not much going on back home in Sunderland, they keep closing down the clubs and live music venues and opening more and more pubs, building more pubs does not make more people. So Newcastle’s the place now. But my brother, Dave thinks anyone below Leeds is a Cockney. He knows someone from Plymouth and he calls him a cockney,” laughs Hyde. “In September we’re supposed to be going to America with Franz Ferdinand and Graham Coxon.” So do the likely lads think they’ll win over a US audience with their impenetrable accents? “Well we played South By South-West in Texas and we had a good response because we’re English but we’re not a typically English band, in that we speak like we’re from somewhere different,” he adds, “A lot of American girls think the North East accent is really really sexy, which is in total contrast to what people think about us in this country…"

Debut album ‘The Futureheads’ is out 12 July