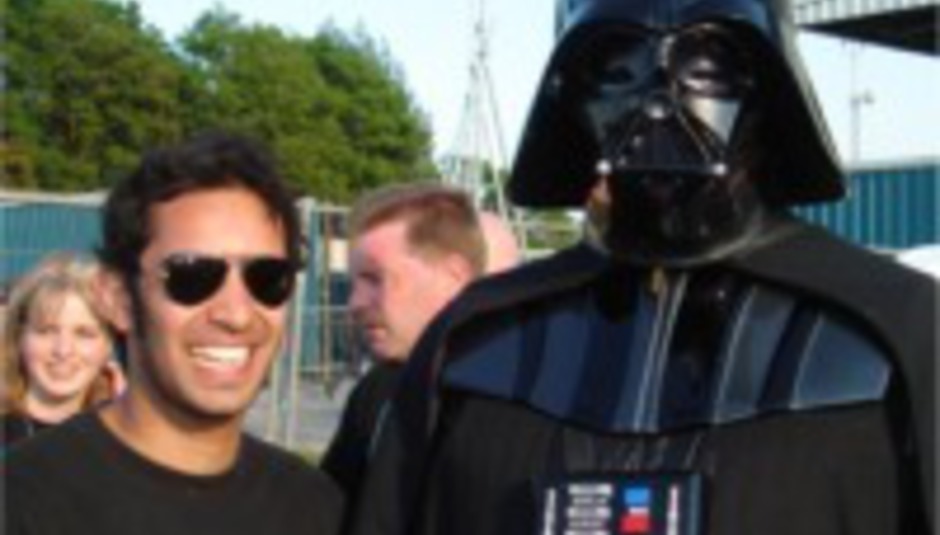 There is a Heavy Metal pedigree afforded to Donington Racetrack that can not and will not ever be surpassed by another venue. It doesn’t matter how many metal gigs you put on or even which bands. This famous circuit is steeped in tradition of the filthiest kind.

It is nice to look back on it all with rose-tinted glasses and stand under that giant Dunlop tyre archway and think of all the famous drivers who raced under the now-decrepit monstrosity; nice to imagine that the man who first thought of filling an empty bottle with piss and then flinging it stageward with venom and malice may have stood where you stand now.

Well, forget about all of that. The fact of the matter is that Download 2006 is here, it’s happening and there’s a motherf*cking heatwave going on right above our heads.

It’s fitting that the festival should begin in such inauspicious fashion. Amplifier are the first to trundle onstage with their post-grunge space-rock. Eventually someone’s got to tell them that they sound like the same band that I was watching five years ago. Stagnation is a clear and present danger. It’s only just got 1pm and I’ve already had enough of the Main Stage.

This is worrying. I know that solace is not far.

The Snickers Stage is different from the Snickers Bowl. This is only comforting if you know this and don’t have to walk the three miles or whatever, having already made the mistake and missed the first few minutes of the band you wanted to see. I took this into consideration and got there early. Just in case. There was no way I was going to miss Gojira.

This meant that I caught the last couple of songs of Orange County bruisers, Throwdown. They’ve got heavy metal and they’ve got breakdowns. It’s nothing that anyone has to think about too much. I caught up with one of the notorious straight edgers – Matt Mentley (bass) – and promptly offered him a sip of my beer. Oops.

By then I’d had enough small talk about crap pop-punk bands and it was definitely time for what I was hoping would be the best band of the weekend. Having seen Gojira play their first UK show in Brighton last month, I was doubtful whether they could top that performance but even if they played at 75% the French heavier-than-heavy metallers would still put in the finest performance of Download 2006.

What happened was Gojira played approximately 12% better than they did in Brighton. That was almost the end of the weekend for me as I soon found that my brain was literally melted onto the turf. They have songs about whales. Lostprophets don’t even sing about Wales. Gojira: mental French eco-warrior motherf*ckers.

The rest of Friday was taken up by Deftones being a bit crap – obviously they used up all their powers during their storming retro show at The Scala a couple of nights before – and by two hours of Tool being a whole load of self-indulgent brilliance for far too long, far too skilfully. The prog-metal pioneers soon drove me to drink and I passed out safe in the knowledge that the fully publicised, secret Main Stage openers awaited me in the morning.

I had been waiting to see Khoma again for a few weeks as the heavy post-rock found on their album has grown on me considerably. Sadly, upon arrival to Camp Donington I received news that the ultimate heavy metal supergroup, DOWN, were to open up the Main Stage on this morning. An eyebrow was duly raised.

Apparently, Phil Anselmo initially thought they were on at 11pm. When he discovered they were on in the morning he simply muttered something about “motherf*ckers” a few times. He hadn’t completely gotten out of that bad mood but had managed to wake himself with a steady diet of Bacardi and dope. It worked, of course.

Soon afterwards, Berkshire metallers Exit Ten played the Gibson/MySpace Stage. Sadly, due to my cancellation of my MySpace account, I was unable to attend but I did catch up with singer, Ryan Redman soon after his favourite bit of the weekend (his band playing) had passed.

Raz: “What’s the craziest thing you’ve seen at Download 2006?”
Ryan: “The amount of people who are sunburnt to f*ck.”
Raz: “Not a fan of sunburn then.”
Ryan: “All those people are gonna get skin cancer. Put some suntan lotion on.”
Raz: “I’ve got a suntan.”

By then it was about a million degrees outside so I thought it would be for the best to stand in the sun for a while and watch Arch Enemy. Sadly, I got a bit bored so set up camp inside to watch England play shit football. The football was so boring that I decided to get sunstroke instead.

It was a wise choice because Alice In Chains were onstage and it was almost like Layne Staley had never died. Seriously. It’s almost as freaky as when Matt Heafy from Trivium does his Hetfield impression. Talking of Trivium, I grabbed their bassist Paolo Gregoletto for literally not very long. I did ask him some questions though.

Korn were hampered by Jonathan Davis’ newfound blood condition but their variety of guest vocalists spiced up proceedings. While Davis would have stifled the charismatic output of his colleagues, this evening it was their duty to take his mantle and I’ve never seen Fieldy interact with the crowd like he did here. This was a welcome improvement for everyone but Davis.

Metallica played Master Of Puppets and loads of other songs for bloody ages. Do I really need to say any more?

Watching Hatebreed is one way to wake up in the morning. The heavy-as-hell metal warriors bludgeoned their way through 25 minutes of breakdown filled riffery with all the brutal anger one can muster up at 11am.

Greater things were expected of Dragonforce. There weren’t any trampolines or anything. They just played their music and ran around a lot. It wasn’t enough to distract the restless crowd. Excitable keyboardist, Vadim Pruzhanov was belting across the stage “wearing a strap-on. I shouldn’t really call it a strap-on.”

Raz: “What’s the craziest thing you’ve seen at Download 2006?”
Vadim: “I saw Matt Tuck and he just ignored me. I love looking at boobs.”
Raz: “I saw a girl who was literally just wearing sellotape.”
Vadim: “She must really hate her parents.”
Raz: “In this heat, this free beer really goes to your head.”

Luckily 36 Crazyfists bring you straight back down to Planet Metal. There was talk of Your Favourite Alaskans cancelling because vocalist Brock Lindow contracted a gammy throat but all was well and they proceeded to batter out their formidable melodic screamo-metal. I collared their rather tall drummer, Thomas Noonan to talk about stuff.

Raz: “What’s the craziest thing you’ve seen at Download 2006?”
Thomas: “Brock got a shot in his ass just before we went on. I don’t know if it actually helped or just pissed him off a bit.”
Raz: “What’s the last thing you downloaded?”
Thomas: “The last thing I downloaded was Underoath. The very next day I found out our record had been leaked online. I think it was automatic payback.”
Raz: “That’s called karma.”

I got my hiking boots out to get to the Snickers Stage in time for ridiculously young American emo-rockers, From First To Last. Onstage, the quartet was greased up and ready for action, baiting the crowd into throwing bottles at the stage while they rocked their experimental emo to the masses. Matt Good, guitarist with the band almost managed to sit still long enough to talk to me. Almost.

Raz: “What’s the craziest thing you’ve seen at Download 2006?”
Matt: “There’s some crazy shit that I’d like to keep off the record.”
Raz: “Tell me just one thing. Please?”
Matt: “Our bus almost wrecked and we all almost died.”
[Stormtroopers walk in]
Matt: “I’m a huge Star Wars fan.”
[Matt runs off]
Raz: “Ok.”

Those pesky stormtroopers always thwart my plans. One band that owes FFTL a couple of drinks is Fightstar. The crowd wasted some bottles of piss on the American teenagers but Charlie et al were sadly still pelted for the first two songs of their fine, beefed up set. The post-hardcore troupe stuck it out though and even called some crowd members rude names. Ooh err.

Next on stage in the Chocolate Dome was Aiden. Face-painted frontman WiL Francis complained about the stage being wet and how much he and his band were slipping around on it while they performed their overblown emo bombast to the impressionable youths before them. I think I was delirious with sunstroke at this juncture but here is a short extract from a four-hour conversation I had with the burly Aiden singer.

I didn’t see a single chocolate bar all weekend but I left the Snickers Stage none the less and bounded over to the newest goth-pop princess, Betty Curse. Having performed her Riot-lite set in the other Snickers venue earlier in the day, ultra-fashionable Ms Curse had just enjoyed the delights of WiL and his merry chums. I saw her eating food.

Raz: “What’s the beef, Betty?”
Betty: “I’m just chilling out now with a drink and a cigarette. Except without a cigarette.”
Raz: “Any plans?”
Betty: “I want to see Cradle Of Filth but I’m doing interviews.”
Raz: “They’re on now. Oh, you’re doing an interview.”

I, however, did get to see the mighty CoF and bore witness to the even mightier Dani Filth spew some vitriol about a “rubbish wanker” – an impressive cuss from the leather-clad goon. Talking of vitriol, it was at this point when I literally walked into Som Wardner from My Vitriol. He wasn't playing and was wearing a leather jacket. Is he completely bonkers?

There was no impressive cussing, nor was then any excessive use of bovine-fashioned garments from Welsh metallers, Bullet For My Valentine. Instead the quartet concentrated on just being bloody great. Despite playing the same set that they were playing 18 months ago, it still sounded as fresh and invigorating as it ever did except now there was a new confidence and surety that was absent, or at least imitated, before. An even brighter future beckons.

Guns N Roses came on early and promptly got covered in piss.
It generally didn’t go well after that.
For anybody.