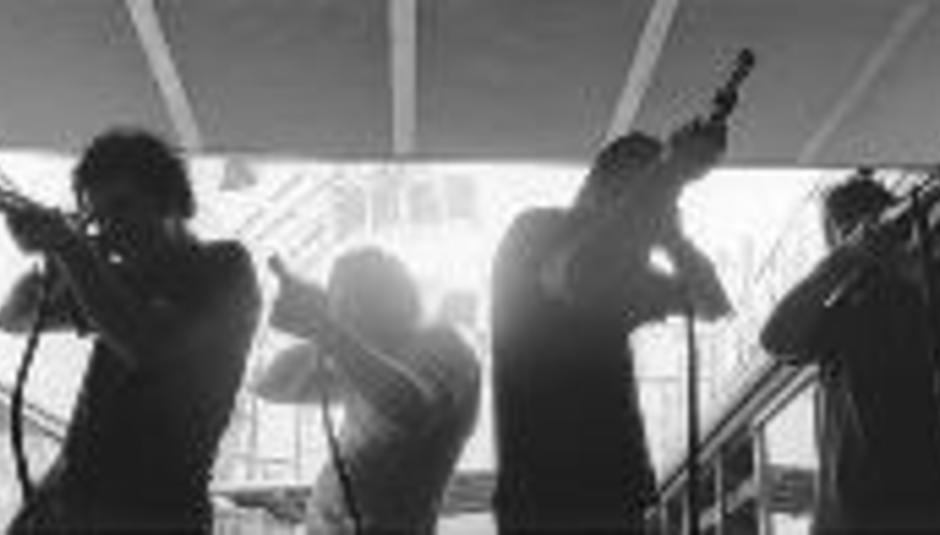 by Mike Diver February 22nd, 2004
It was recently reported that some councillors or heritage organisation in the Outer Hebrides were planning to cull some 5,000 hedgehogs which were, obviously, threatening to overthrow the human population and establish their own prickly society of chaos and disorder. Yeah, whatever. Point is, maybe New York councillors should do the same, only with bands. Imagine them; sneakers squeaking on the tarmac as they run for their lives the best they can in too-tight jeans and trendy haircuts – all the time being chased down by big men with hungry dogs, guns, and quite possibly chainsaws. There are simply too many bands in New York, so many in fact that a number of truly great acts, Pilot To Gunner included, are criminally overlooked in favour of the aforementioned hip cats with more trust fund money than musical ability. You think we’ve got it bad here? Believe me, NYC’s UK invasion is the tip of the iceberg.

“There isn’t really a ‘New York sound’,” explains likeable PTG front man Scott Padden over a drink (or four) in a north London boozer, “but there’s this New York thing, which is style over substance. I mean, The Strokes are okay, and Interpol have one dynamite song, but these bands are spending too much time on their appearance, what with their fucking suits and ripped shirts and shit, and clearly not enough time on their songs.

“We’re just a rock band, but most bands from New York are like, RAAAWK! Not that these bands are bad, but they’re all just like The Rolling Stones, or The Stooges, and whilst those bands are fucking awesome, these other bands just like ‘em for their leather jackets! It’s like, ‘what are you doing?’ It’s not real. New York is so hard to conquer. We’ve been there for four years and we still don’t fill rooms because there are just so many bands and so many clubs. I mean, we do get good shows, but we’ve still sold more records on the West Coast than we have at home.”

Pilot To Gunner are completed by bassist Martin McLoughlin, drummer Kurt Herrman and guitarist Patrick Hegarty, the latter member bearing a rather striking resemblance to a certain old-school metal-loving Foo Fighter, in person at least (I don't quite see it in their press shots). Hegarty is affectingly shy when we first meet, and elects, along with everyone bar Padden, to give the interview a miss, preferring to sample the array of continental lagers at the bar. Later he’ll scream his gizzards up alongside Padden onstage at The Garage, at the band’s first ever UK show. The band may not have visited these shores before, but they’re notorious Stateside for their lengthy tours – seven in just two years – which have seen them perform alongside Jets To Brazil and Ultimate Fakebook, and leave a handful of wrecked vans in their wake.

“Mostly we’ve just done our own shows,” says Padden. So you favour a DIY approach to things then? “No, I used to hate booking our own shows. We have a booking agent now. I just wanna be told where to go. We drive ourselves around though, but not over here! We wouldn’t get anywhere if we were doing the driving ourselves over here – we’re always late or lost.”

Pilot To Gunner’s latest album, ‘Get Saved’, came out here in January on Rykodisc. Released on Arena Rock in the States, the band very nearly never put pen to paper after Padden’s first encounter with label boss Greg. The two came to blows after Greg commented on the size of Padden’s guitar.

“He’s from Alabama. Now, you can take the guy out of the South, but you can’t take the South out of the guy. He came to see us, and after the show he kept going on about my guitar being small. Now, I was already drunk, and for some reason I was like, ‘what? Are you joking?’ But he kept giving me shit, so I asked him outside. There were all these writers on the sidewalk, and then I punched him in the face. He punched me back, and then we were bro’s. But my jaw was kinda stiff.”

Deal secured in the strangest of fashions, the band set about releasing their debut, ‘Games At High Speeds’, which was later re-released prior to ‘Get Saved’. The band’s DC-inspired sound on ‘Get Saved’ is no accident – they worked with respected producer, and one-time member of Jawbox and Burning Airlines, J Robbins.

“J was amazing – he was like a member of the band. He sang, played guitar, and his wife, Janet, played on it too. He asked us on the second day of guitar tracking what we thought, so we asked him back, and he freaked out! He was like, ‘I don’t know,’ but we were telling him we were here because we wanted him to decide a lot of stuff for us. So, he went outside, took a moment, and then came back with a shit-load of ideas. When it was time to mix, we’d be sat about playing Gamecube, and he’d come up and say that the song was done. He had some really good ideas. Jawbox are a huge influence too.”

Pilot To Gunner close their UK tour a week after our interview with a fantastic set at The Barfly in London. They’ll be back again soon, driving around the whole of Europe for an entire month. With the possibility of alcohol sponsors in Russia, expect them to be in high spirits, literally.