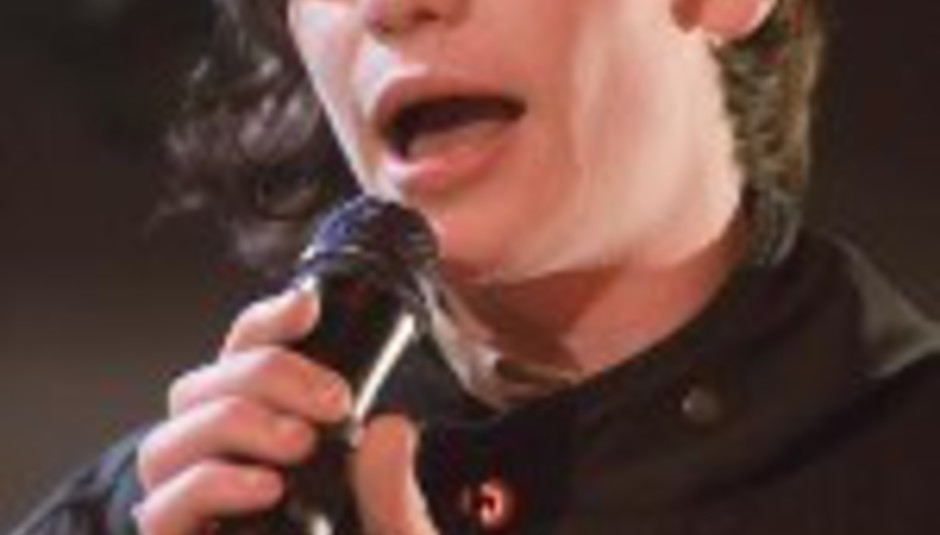 West London four piece Larrikin Love are currently hotter than a day spent sunbathing in the equator. Since the middle of last year, when the delightful ditty ‘Six Queens’ first cast its aspersions in the music friendly thinking man’s psyche, their profile has raised to the point where it's no longer a matter of “if” but now a not-too-distant “when” they'll join close pals the Mystery Jets on Top Of The Pops alongside the Chicos and Pussycat Dolls of this world.

DiS caught up with the band halfway through their mammoth UK tour, which draws to a close at the beginning of April culminating in the release of third single ‘Edwould’.

What are your plans for the rest of the year?

Micko (guitars): We’ve got the Zutons tour in May, and then we’re down for one or two festivals. In between all that we’re about three quarters of the way through recording the album, which should be out on 17th August if everything goes according to plan.

Which festivals are you pencilled in for?

Micko: Leeds and Reading I believe we’re definitely doing...
Cos (drums): ...although we’re not 100% sure.
Alfie (bass): ...And then after that with the album being out around the same time we’ll more than likely be touring again for the rest of the year.

How many songs will be on the album?

Micko: 11... or we may go with 12. One thing we are doing is making sure that every single has brand new tunes on it that aren’t gonna be on the album, so people at least get value for money. We’re gonna put acoustic tracks on some of the singles and also cover versions of some of our favourite songs by our friends’ bands.
Edward (vocals): The album’s going to be called The Freedom Spark and it will basically be split up into three parts. The first part is called “Hate”, and then the middle bit is going to be called “Fairytale” and then the final bit will be “Freedom”. The first bit will have songs on like ‘Downing Street Kindling’ and then the next bit will have the dreamier songs on it before ending on the more uplifting songs that are seen as being like a spark for freedom.

‘Edwould’ is coming out on April 3rd. What are your plans for the follow up?

Edward: We’re not sure yet to be honest.
Micko: I guess we’re not really supposed to be divulging what we’re planning to put out at this stage, but we have re-recorded all of the tracks on our previous singles as well as most of the demos that people may have got hold of via the web.

Are you planning on putting all of the previously available demo tracks on the album, à la the Arctic Monkeys?

Edward: A lot of them will be yeah. I mean ‘Downing Street Kindling’ is a really good song even if I do say so myself!
Cos: All of these songs that became available on file sharing sites were just demos at the end of the day.
Micko: I sometimes feel that a lot of those have become monsters at our door.
Edward: It's like most of them were written at a specific period for the band, and some of them aren’t that representative of where we see ourselves heading. I think the ones that have been re-recorded sound so much stronger than on the first demos. You can tell the difference straight away.

Edward: For me I’d say a definite no. I just think this country is really draining. There are so many things you might want to do but everything about England right now feels so constraining. There’s so much more out there beyond this land, and I think one thing I’m trying to do is do is go out there and see as much, gather as much information as I possibly can. I think I’ve taken as much from English culture as I could ever possibly want, so therefore it doesn’t have anything else to offer me.

Do you see yourselves eventually moving away from England, particularly if the band becomes massively successful?

All: Yes!
Cos: I think I’d want a house on a secluded island that was as far removed from English culture as possible!
Edward: I think I’d go somewhere in Europe. Anywhere really as long as it's not here. I went to India last year and it was the most amazing place I’d ever been to in my life.
Micko: I think I’d end up somewhere like Las Vegas...
Alfie: ...I’d like to live in a caravan somewhere. On a farm.
Micko: Well I love Vegas – it's just 24/7 non-stop action, the city that never sleeps.
Edward: But it wouldn’t be that far removed from London, with all the hustle and bustle...
Micko: ...yeah, but I really like that.
Edward: I could go there maybe for a couple of weeks as a holiday but not to live. What about you (to me)? Where would you go?
Well, I think I’d stay in England and maybe go somewhere like St Ives in Cornwall…
Edward: Yeah! Now that is somewhere that I really do love about England. Cornwall’s beautiful and my girlfriend’s parents have got a little house there... or maybe me and you could get a place together!

Most of the songs that have been previously available – the likes of ‘Docks’, ‘Ragaddy Anne’, ‘On Sussex Downs’ and ‘Little Boy Lost’ for example – could all be singles in their own right. Have all of these made the final cut to the album? Edward: No, not all of them. ‘Graham On The Rocks’ aka ‘Docks’ we killed off a long time ago. I think the ‘Docks’ title came from someone who saved it to their PC and put it on a site like LimeWire so that title has stuck but...
Cos: ...there’s only ‘Ragaddy Anne’ that may be on the album from that list.
Edward: Although we’re not playing that as part of the current live set... but I’m hoping we’ll reintroduce it before long.
Alfie: I suppose you could say that the ‘Little Boy Lost’ hasn’t ever been found and ‘Graham…’ has gone on holiday!

It’s a shame really though because this is your first major nationwide tour and a lot of people have come along to see you on the back of hearing those songs.

Edward: Yeah I know what you mean. We’ve had shouts for ‘Little Boy Lost’ at every show we’ve played so far. The thing is though, that if you’re not happy with what you’re singing about and you’re not enjoying it, that can transcend itself to people in the audience, plus if it doesn’t represent the band’s present direction there doesn’t seem any point in playing it. It’s the same with anything in that once you’ve gone through a phase, no matter how good something is you wouldn’t go backwards just for the sake of doing it.
Micko: I mean, we’ll always leave the door open for these songs to return. Maybe one day…

Quite a lot has been made of the Eel Pie Island connection between yourselves, Jamie T and the Mystery Jets. Do you see that as having helped the band or has it become something of a hindrance?

Edward: I don’t see it as being that helpful really, to be honest. They’re all just friends of ours and even if none of them were in bands – or indeed any of us for that matter – they’d still be friends of ours. I think that whole Thamesbeat label that the press have stuck us all together under is just wrong. I mean, none of the bands sound remotely the same for starters. It all started as a silly little joke that Alfie made up once in an interview.
Micko: It's all just friendship and geography really and very little else.
Cos: I actually know someone who’s bought the rights to all of the Thamesbeat sites on the Internet! .com, .co.uk, .org, .net! Everything!

Until recently, you all still held down day jobs?

Edward: Yeah, but we were able to give them up when we got signed.
Alfie: I used to be a car park attendant.
Edward: He used to live near Twickenham rugby stadium and on match days he’d put on his yellow car park attendant’s jacket and charge people a tenner to park on his estate!
Micko: And then he got done for fraud!
Alfie: But I was only providing a service… You’re now signed to Warner Brothers. Do the label give you much freedom in what you put out and what artwork you can have on your releases?

Micko: Within reason yeah. I mean we can’t have big fat tunes that go on as long as we’d like ‘em to sometimes. I think they (Warners) see us as radio friendly marketable.
Edward: They did interfere with one of the songs once. They plied Micko with alcohol and then waited until me, Alfie and Cos had left the studio, and then persuaded a drunken Micko that it would be a good idea to add handclaps onto ‘Happy As Annie’.
Alfie: We came back the next day and played it back (demonstrates handclapping noises) and we were like “Get that fucking noise outta there!”
Edward: To be fair though they are quite good. They’ve never forced anything on us since and if they have an idea they’ll put it to us in a more inquisitive rather than aggressive manner.

Cos: Yeah. That’s why we made it like that, basically.
Edward: The funny thing is that for ages I was adamant that song was never going to be released, even when other people were telling me that it was the best thing we’d ever written. I completely regret that now and take it back so much!
Micko: I think the song itself happened naturally...
Edward: ...yeah to an extent, although there we always set it out as a juxtaposition between the two with the lyrics being gloomy and the music being happy. The funny thing is, when you see people dancing around to it and then they start singing along and by the second chorus they’re like “What the fuck? Did he really just say that?”
Micko: It’s like on the breakdown, everyone usually gets all maudlin but then once the final chorus kicks in they’re all smiling again.

An hour later, Larrikin Love play their first ever show in Nottingham to an intimately sized but overly appreciative audience. In six months' time when they're selling out venues six times the size, you just know every man and his canine friends will swear they were there.