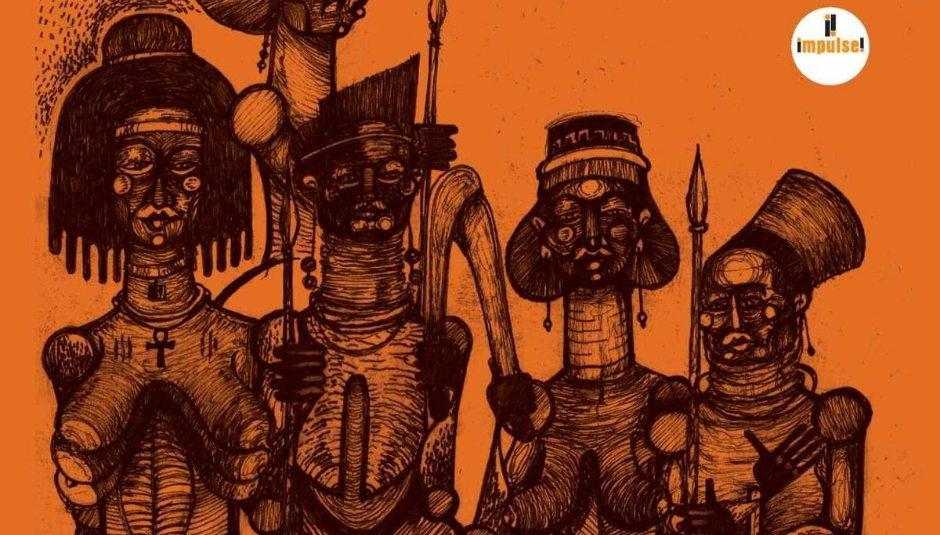 Nick Roseblade on Sons Of Kemet's Your Queen Is A Reptile

Jazz albums and the Mercury Prize have a troubled past. There’s always at least one in the shortlist, but so far they’ve been overlooked as the overall winner. Some of the bands claim that being nominated is the same as winning as they are being mentioned and spoken about on a national level. But at least they’ve been recognised, right? Metal isn’t that lucky. Anyway, this isn’t about the Mercury panel snubbing jazz all these years, it’s about Sons Of Kemet and their album Your Queen Is A Reptile.

The album is possibly one of the most political albums ever shortlisted as it concerns how the British monarchy doesn’t represent black immigrants, with each track referring to an influential black woman in history. Sons Of Kemet are made up of bandleader Shabaka Hutchings on saxophone, Theon Cross on tuba, and Seb Rochford and Tom Skinner. There’s also a who’s who of guest spots including Josh Idehen and Congo Natty on vocals (and bear in mind Roachford has been nominated four times in four different bands). Let’s hope this one is the charm!

I’m pumped. I’ve heard good things. I’m ready for the spirit of jazz to take me over. Let’s see how it pans out…

‘My Queen Is Ada Eastman’

Opening track ‘Ada Eastman’ tells us everything we need to know about the album. Dense layers, thrumping tuba, scattershot drumming, and airy saxophone give it an Afro-Centric feel. And that’s effectively what ‘Your Queen is a Reptile’ is – Afro-Futurism, but Landan style. Ada Eastman is the great-grandmother of band’s de-facto leader Shabaka Hutchings. Halfway through Joshua Idehen gets involved and starts rapping with all the charm and punchlines you expect. “The prophecies of seers / Smashed to pieces on the pier / Put myself back like IKEA” and “Still here amongst the brass / Garments washed in starch / London wind is biting harsh / Shiver my thin moustache” tell us everything we need to know and put a smile on our faces. If this is the opening track, we’re in for a TREAT!

‘My Queen Is Mary Phipps Clark

A quick web search tells me that Mary Phipps Clark was an American social psychologist, who looked into ways to develop self-consciousness in black pre-schoolers. Hero. Musically ‘Mary Phipps Clark’ is full of smouldering tubas and hard hitting drums. At times it feels like Gangsta Brass, but dubby as. This makes sense as Congo Natty toasting all over the shop. About halfway through it gets a bit lost, but it's cool as it's still fun and kind of works. Sons Of Kemet just got lost in the jazz. We’ve all done it.

‘My Queen Is Harriet Tubman’

They’re getting into a rhythm now and its working. The combination of skittering beats, jaunty rhythms, and that deep tuba makes ‘Harriet Tubman’ the danciest track on the album so far. What ‘Harriet Tubman’ shows is that Sons Of Kemet can make party bangers as easily as scathing political attacks on society and how the government has let generations down.

‘My Queen Is Anna Julia Cooper

At times ‘Anna Julia Cooper’ feels like they’ve taken Hot Chip’s ‘Over and Over’ and reimagined it as a steamy Afro-Centric jazz track. As the beat grows and swells the horns and tuba work in a call and response motif. It works incredibly well, as it’s a more chilled and laid-back vibe and not as hectic as the openers. Played live, this feels like it has the capacity to be huge, to seemingly last forever and just go off.

‘My Queen Is Angela Davis’

The laidback vibe continues on ‘Angela Davis’, but there is a bit more bite to it than ‘Anna Julia Cooper’. It’s also funky as hell and has a massive swagger to it, just like Davis herself. So far this is the standout track – it’s nigh on impossible to listen to this and not tap a foot, nod a head or feel like a boss while doing your weekly supermarket shop. Halfway through the tempo changes and it becomes a real stomper. As the tuba and drums gets quicker and more intricate, the sax holds everything together and becomes the focal point. Somewhere there is a Venn diagram of where the combination of enjoyment , high tempo jazz ,and dirty tuba equals ‘Angela Davis’.

‘My Queen Is Nanny Of The Maroons’

After the onslaught of ‘Angela Davis’, Sons Of Kemet really have slowed things down a bit now. As the Maroons were ex-slaves in Jamaica who fled to the mountains to set up new communities, it makes sense for there to be a woozy, tribal vibe going on. The horns, and sax in particular, are the star of this track, with delicate melodies and rhythms wafting in front of you like the morning mist as it rolls down a mountain.

‘My Queen is Yaa Asantewaa’

So far the tuba has played a prominent role on ‘Your Queen is a Reptile’, lurking in the background and propelling the songs forward. On ‘Yaa Asantewaa’ it feels like Theon Cross has stepped up and delivered the performance of the album. Cross’ playing underpins the whole track and allows the other musicians a chance to interplay and bounce off each other, so Cross is locked in the groove. The Afro-Centric motifs feel more pronounced as Asantewaa was the Queen Mother of what is now Ghana. ‘Yaa Asantewaa’ also has more of an aggressive bite to it – this could be because Asantewaa and waged a war against British colonialism in 1900.

‘My Queen Is Albertina Sisulu’

‘Albertina Sisulu’ is another stand out track. This is just pure swag. Huge jazz hooks and funky rhythms do battle for your feet, and it’s one of the most fun tracks on the album, as everything works and the playing is flawless. At just over five minutes it doesn’t drag and is about as tight, and lean, as it can be. All the fat has been trimmed off in rehearsals, and we’re left with a beast.

‘My Queen Is Doreen Lawrence’

The final track is ‘Doreen Lawrence’ and you feel that they’ve saved the best for last. After a scattershot drum intro, a deep tuba bassline slowly emerges before delirious sax explodes giving us an idea of what Sons Of Kemet can do when they put their foot down. All of a sudden a rap starts up: “Don't wanna hear that racist claptrap / Anybody chat that crap get clapped back / Don't wanna take my country back mate / I wanna take my country forward”. This is what the album has been building to, and what it’s essentially about – powerful rhythms and even more powerful words flow about us, exactly how this album needed to end. It’s visceral and shows that jazz still has a place in voicing the inequalities in society in 2018 as it did in its heyday. Powerful stuff on a powerful album. I hope it wins.

For more information about Sons Of Kemet, please visit their official website.