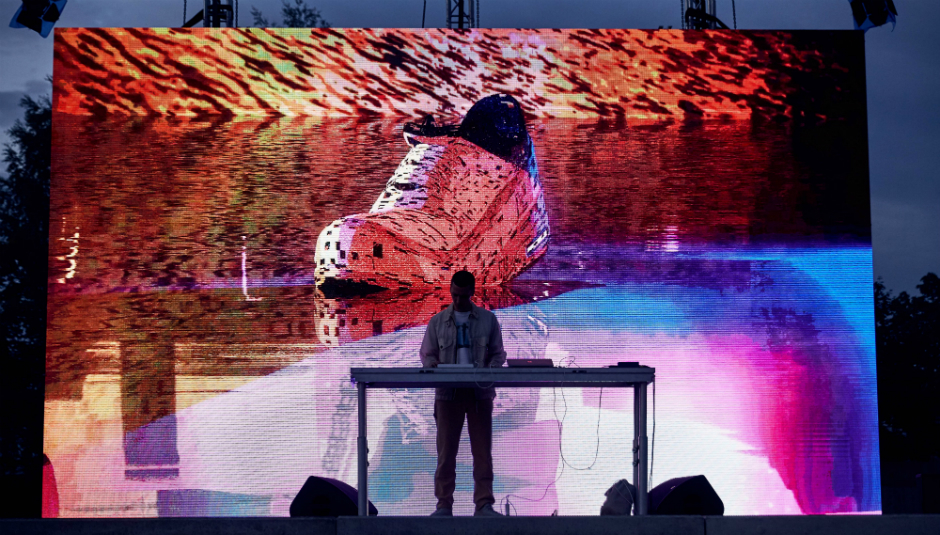 Drowned in Sound was deeply saddened to hear of the death of Joe Maus, brother and bandmate of John Maus, shortly before they were due to play this year’s Tirkultura event. Our thoughts are with Joe’s family and friends.

We have just finished a long lunch on a veranda which extends out into Latvia’s beautiful Gauja National Park. Further up the table is Rolands Pēterkops, a designer, and friend and colleague of Austris Mailītis, an architect. Together their minds have conspired to bring a group of left-field electronic musicians, visual and performance artists, DJs, and experimental filmmakers to Cēsis, a small and seemingly affluent town, and an enclave inside this vast woodland. The event, this year called Unexpected Sources, is the first to take place under the Tirkultura banner.

What’s going on here, I wonder? We have a couple of organisers, clearly connoisseurs of music and art, but whose respective professions fall outside of the music industry. They have—as far as I can tell—little prior experience putting on an event like this. On the first time of asking, they have flown in two days’ worth of artists and performers, from all over the world, to come and play in a small town of just 17,000 people, two hours outside the Latvian capital. They have constructed a purpose-built, open-air venue for the occasion. Hell—they even brewed their own beer for the occasion.

I am broadly admirable of the level of gung-ho required to try something like this, but my spidey senses are tingling. Has somebody come into a vast inheritance, and, in a brilliant moment of nihilist intent, agreed to blow it all on a weird but wonderful party? Did Netflix add Wayne’s World 2 to their Latvian catalogue recently, leaving the pair feverishly convinced that if you book them, they will indeed come? Does Cēsis simply boast a remarkably high density of admirers of Visionist’s brutalist sonic architecture? Is Latvia a hotbed of Visible Cloaks fans?

My intrigue is partly satisfied when I learn that, for the time being, Tirkultura is both nested within and supported by—incubated by, I suppose—the well-established and more straight-laced Cēsis Art Festival. This is a month-long event which, since 2007, has hosted an annual program of “classical music concerts, visual arts exhibitions, opera and drama performance.” This year, the soprano Marina Rebeka sings a program of Wagner, Tchaikovsky and Prokofiev alongside the Latvia Festival Orchestra, and Trio Tresensus play a concert of Latvian folk music. At lunch, we meet festival director Juris Žagars, a sturdy man with the mechanical handshake of your least favourite uncle, but, it has also to be said, the curiosity and enthusiasm of somebody a fraction his age.

(There are some musicians here, too, but we don’t exchange any words of real consequence, because sometimes my brain filters my life such that it reads like an episode of Peep Show, and for some reason I would sooner talk to somebody about the path of their transatlantic flight than admit that I have enjoyed their work to their face).

Juris, though—he’s a talker. A pretty good one, too. We are regaled with tales of events past—some soaring successes; some gambles which paid little in dividends. Many of them have to do with his beloved classical repertoire: he speaks fondly of the local concert hall (disproportionately opulent, given the size of the town), and his love for composers like Mahler and Britten.

But some are looser: he smirks when he thinks of the frequency with which the town’s police service has needed to relay noise complaints (conveniently he and the police chief are old pals, so it doesn’t keep him up at night). He tells us proudly of a party for which he booked the Frenchman DJ Mad Dog, alongside some other performer whose name I can’t recall. The event, he says, ended abruptly when the pair began launching furniture off the roof of a building.

I don’t get the sense that Juris sees his desire to move across and between artistic boundary lines in this way as unusual. This much, he says, is ingrained in Latvia’s cultural DNA. He claims, as do others throughout the weekend, that Latvians possess is a willingness to experience culture without prior expectations or prejudices—a performance which one doesn’t like is, in many respects, as valuable an experience as one which they loved.

I wonder how much Rolands and Austris are banking on that fact.

Drummer Andrea Belfi begins our weekend with a lactic acid trip from which it’s hard to come down. Playing in rhythmic lockstep with electronic sounds triggered from a table beside him, Belfi’s fascinating set is at once a feat of utter physical endurance, and a nuanced, undulating thing in which he showcases a far defter touch.

Later, Portland’s Visible Cloaks deliver forty minutes of digital ambient music. It’s Music For Airports re-written for the holodeck, and it is frankly gorgeous. Stood motionless behind a desk for the duration, the pair are anonymously silhouetted against a slowly shifting video backdrop that looks as if M.C. Escher turned his hand at designing Windows 95 screensavers. Hypnotic and absorbing stuff.

Things quickly begin to pick up in pace with arrival Dominiqe Dumont. Her music is far livelier here tonight than it is on record—where it sometimes comes off a little vaporwave meets ‘Girl From Ipanema’—and, well, I suppose that’s a good thing indeed: it’s 1am on a Saturday and these art school kids look like they needed to dance.

Later still, our friend from FLOAT and arbiter of taste Sofia Ilyas plays a DJ set that I am reliably informed ended shortly after 4am with a modest stage invasion. I had retired to my hotel room hours earlier to screen an episode of Anthony Bourdain’s Parts Unknown for myself and to wonder, with a degree of contempt towards my minibar that I am not comfortable admitting here, why mainland Europeans seem to hold praline in much higher regard than milk chocolate.

The next day she will remark that I am “young.” I am not sure what it is worth.

No mind: I emerge on Saturday well-rested. Tirkultura has booked a lot of brilliant but dour-faced electronic musicians for its inaugural edition, which makes GENTS unintentionally hilarious. This is 80s pastiche to perfection: drums sounds which sound as if they’ve been loaded off a floppy disk, and this young fella prowling the stage like a millennial Tony Hadley. “We were saying it’s like early Talk Talk or something,” quips a colleague from The Wire, and, well, isn’t that just the most gloriously backhanded compliment you’ve ever heard?

Our Saturday evening is wrapped up by Motion Graphics and Londoner Visionist, both of whom deliver intense A/V shows. The former’s music, while built mostly from irregular bursts of futuristic digital sounds, is also often oddly calming, like popping a sedative inside a flickering and failing VR headset. Behind him, a video narrative unfolds, all neon reds and purples against a black, nighttime background. The latter’s is far more pummeling; there is little to do apart from submit. He performs against a video backdrop by Portuguese filmmaker Pedro Maia, shot on decaying 8mm film.

The morning after, Juris takes us out on the Gauja river. He tells us that the worries the event felt too slow, that he had tried to encourage the organisers to pick up the pace, that he was rebuffed with the accusation that his generation insists on doing things too quickly, that they are always in a panic.

It is true that while the curation was often brilliant, it was also occasionally incoherent, oddly paced with obtuse performance art juxtaposed against soothing ambient music. There are elements of the weekend that are somewhat shambolic, and there weren’t many in attendance.

But I don’t suppose any of that matters. Those that did attend came with open eyes and ears, and, by and large, the weekend went off without a hitch. And really, I’m impressed. Impressed that the organisers found the pluck and initiative to try something like this, and pull it off; impressed that the older generation had the open-mindedness and foresight to support such a venture. The organisers put their passion and sense of adventure ahead of any disabling pragmatism and the result was something almost entirely unique, and frequently very enjoyable indeed.

By the end of the weekend I get the sense that Rolands and Austris hope for Tirkultura become something like a Latvian answer to Poland’s Unsound, or Portugal’s Semibreve. It doesn’t seem an outrageous proposition at all.