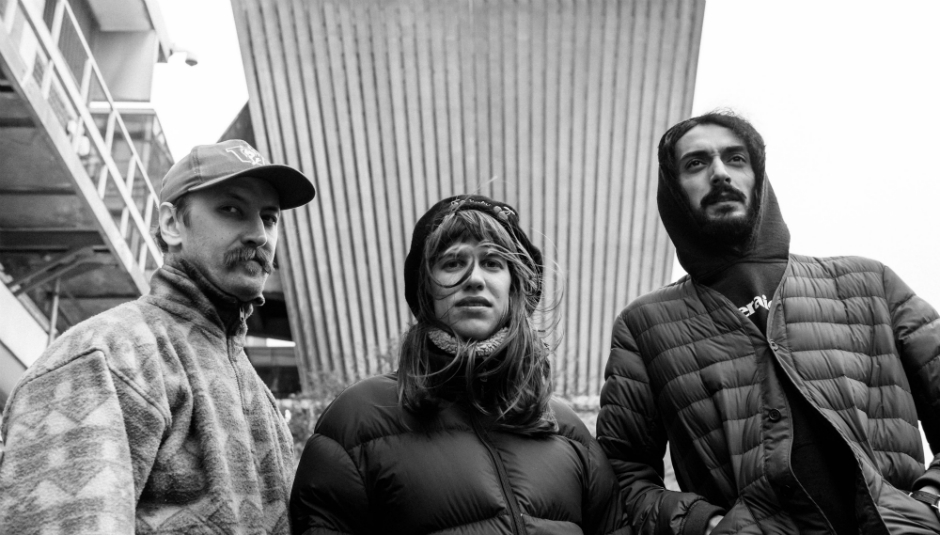 Originally hailing from a city more synonymous with the State Conservatory than a gang of shoegaze addicts, Pinkshinyultrablast have nevertheless seen great critical and commercial success since their debut album Everything Else Matters and follow-up Grandfeathered. They’ve been compared to bands such as Lush but this is no mere throwback tribute - due to their sharp, icy electronics and ability to subvert the genre, bringing something new to the table. They possess not only the spirit of late 80s/early 90s British bands like Cocteau Twins, but also machine-made sounds of the same era from Sabres Of Paradise or Global Communication, not to mention wider vibrations like Cluster, Popul Vuh, Terry Riley and Philip Glass.

The trio's third album, Miserable Miracles, is out on 4 May via premiere shoegaze ambassadors Club AC30 (UK) and Shelflife (USA). The band have also announced an extensive UK tour to coincide with this and the 10 year anniversary of their very first show, and very kindly talked us through the ideas behind the new record.

Lyubov: This song opens our third full length and marks us moving in a new direction with sound and production and in some way music genres. For one of the most upbeat and fast-paced songs of the LP we also feel like it’s one of the album’s most lyrical.

Roman: Since the last album we are geographically away from each other and the change in locations has led to us moving in new directions musically too. The sound and its production we feel has progressed. For those people who look to genres, we are maybe in a different one too now. Lyrically expressive, this is one of the albums most upbeat and fast-paced tracks and an introduction to Miserable Miracles.

Lyubov: We revisited the early years of making music as a band with this song and drew from the early inspiration with krautrock we had. It’s nice to play with this genre once again. After listening back to the final version also felt like a tribute to Stereolab in some way.

Roman: For this track, we had a chance to revisit the early years of how we made music. We spent it together as a band and drew on some of our personal earliest inspirations, It certainly touched on krautrock and some of the less known tracks in that musical space too. We found this a super refreshing approach and cared less about recent musical trends and went old school. When the track was done and we listened back to the finished version it also felt like a tribute to Stereolab in some way, a band that influence far more bands than the casual listener probably realises.

Lyubov: The first song we started working on from the album. We all had a strong vision early on of what this song should be like and have had quite a bit of back and forths about it. This is a result of a close collaboration and is also one of the singer’s personal favourites.

Roman: One of the favourites of Lyubov, the lead singer, this was the first song we started working on from the album after a small break post-Grandfeathered. We all had a strong vision early on of what this song should be like and had quite a bit of back and forth about it. It was worth it to come up with something we are all so happy with. The main melody of a chorus came to Rustam whilst he was in a bus so he just switched on a laptop and made a fast sketch and it evolved from there. This is a result of a close collaboration and the long gestation period hopefully shows how much care went into it. The video for this was a lot moodier than what had come before, channelling our inner Lynch!

Lyubov: An intermission on the album, though the conclusion for side A of the LP.

Roman: What started out as a mellow breaking point in the album has ended up being two of our manager’s favourite tracks. He has compared them to Brian Eno, though that is a lofty accolade so they are not our words, ha!. The likes of Brian Eno are obviously great influences as they are for many musicians. This originally was just a part of a jam Rustam played on a Fender Rhodes into pedals and several guitar amps, we were so surprised of sound that we took a small part of this jam into the album.

Lyubov: A gateway into the second part of the album.

Roman: Following on from 'Blue Hour' this starts off the second half of the album. A record very much designed to be able to be dipped into and consumed as a whole too. Sequentially there was a lot of thought put into the way the album segues and in this digital streaming age, we encourage people to listen through as a whole. The cinematic qualities of both this and 'Blue Hour' are sounds we would love to explore further especially with original scores and soundtracks how the likes of Mogwai have managed to combine the two. This track has some crazy Stereolab kind of chords progression and has some cyberpunk anime feeling, Ghost in the Shell or something like this

Lyubov: The song that probably points the most to our interest and continuous exploration of the obscure J-pop of the 1980s. Also a nod to our mutual appreciation of the Japanese artist Chiemi Manabe.

Roman: This is our take on disco style music almost without the guitar involved. If we had to point to one artist that this song is our most mutual appreciation of, it would be Chiemi Manabe.

We are on a mission to continually explore our fervent interest in obscure Japanese music of the 1980’s and our song titles have not hidden that fact across this and previous releases. We realise a band dream of playing in Tokyo, two nights in June of this year, and are looking forward to exploring even more of the sounds and culture whilst we were there, dreams do sometimes come true.

In The Hanging Gardens

Lyubov: At times having a slightly darker and more anxious tone than the rest of the songs on the album, this song manifests our exploration of different ways of vocals - instrument interaction and song dynamics. From parts of acapella to a vocals/keyboards dialogue, to a mix that’s densely layered up, we were looking for new ways to play with different parts and textures of the song.

Roman: This was the song that stands out to us at times of having a slightly darker and more anxious tone than the rest of the songs on the album. The fact that the likes of Andy Bell of Ride and Kurt Feldman from the Depreciation Guild chose to remix it is great too.

Lyubov: This song was the last one we wrote for the album and is named after our keyboardist Rustam’s recently born son Eray.

Roman: It is the last song to have been recorded and a chance for us to be in a contemplative but ultimately upbeat place. To say more words detracts from what we feel is a beautiful thing!

Lyubov: Further experimenting with the mix, here we contrasted an overall light and airy sound with the distorted choruses, clashing the different sides of the spectrum against each other and trying to see what comes of that.

Roman: We close the album out with a bang and a chance to be experimental within our new found musical happy place. Whilst further experimenting with the mix, here we contrasted an overall light and airy sound with the distorted choruses, clashing the different sides of the spectrum against each other and trying to see what comes of that. This is probably the only song on the album that was born from guitar ideas we found among our practice space recordings.

Miserable Miracles is out on 4 May via Club AC30. For more information about Pinkshinyultrablast, including their current UK tour, please click here.

“The songs are literally about escape...