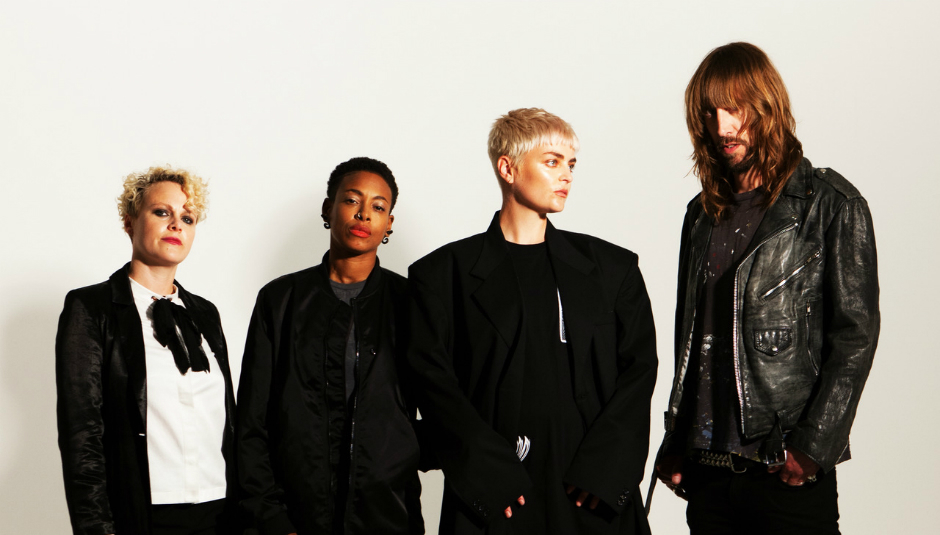 Marking the return of a band who hinted at enormous potential a few years back before disappearing without a trace, Black Gold Buffalo’s long-awaited debut full-length is set for release on 6 April, via their own Buff Rekkids label. The self-titled collection of brooding, dark pop gems is largely about wanting to escape the city, to get up and go somewhere and nowhere. "It's more a commentary than a statement, a narration of our personal experiences and frustration with the corporate climate," offers frontwoman Keziah Stillwell, whose own disillusionment led to a bold move away from the capital.

Stillwell and bassist Hannah Holland talk us through the ideas behind the nine tracks that make up their self-titled debut, which you can also listen to below.

Keziah: This song had a real journey, I wrote it in the grips of anxiety. It’s almost a dedication to it. Me talking to myself, talking to my mind that plays these wicked games on me. It began with a dub beat, washed out guitars with reversed cello, we loved it but it didn’t work live, it felt too slow and stagnant.

Hannah: The rhythm section changed a lot when we came to record. Instead of this dub beat, the album's producer Nicholas De Carlo programmed in a straight 4/4 kick, which totally transformed the song. Marc added a chuggy, shimmering guitar line that gave it a Smith’s/Cure vibe and Joy unleashed her sharp, percussive magic that elevated the whole track. The bass guitar, re-amped and sent through vintage reverbs and delay machines, by engineer Al Harle at Big Jelly Studios, in Ramsgate, which is where we recorded all the drums and effected the bass across all songs. All the mixing, arranging, guitars and vocals were recorded at Nicholas De Carlos studios, Mash, which is in the roof of a window making factory in Ramsgate.

Keziah: This was written, along with a few other tracks from the album, in a tower block in homerton somewhere near the A12.... You could watch the clouds rolling over the whole city, it was very moody and atmospheric. You can really hear that reflected in the vibe of this track. Even listening to it now takes me back there. Lyrically its dedicated to escapism. When you feel like its time to jump ship, in need of something new. Pondering what it is you are wanting to run from?

Hannah: I remember this coming together on a really stormy night in our home recording studio. The urgency is quite electric when played live and it took a lot of mixing and arranging for the power to come through on the production. Joy’s drums are almost thunderous. The backing vocals played a real part in elevating the track. The video for 'Pearls Deep' was shot at Big Jelly Studios.

Keziah: This song started out very minimal, I had just bought my Nord synth and had a flourish of writing these short loops. Out of them all, this one stood out to us. When we first took it to Marc he added the atmospheric Tarantino-esque desert guitar which became a running style throughout the album. Lyrically this song is about your medicine, something or someone who keeps you sane, keeps your grounded amongst the chaos.

Hannah: This beautiful demo from Keziah, that has a gorgeous steel pan sample on it, you can still hear it somewhere. The electronics sit really nicely against the live instruments. The Kate Bush style strings came right before we were finishing the production sessions, it was dragging on a bit and they really gave it a lift! Joy’s full use of toms and percussion were set up in an orchestral way in the studio.

Keziah: We wrote this when we were living in a tiny flat with HORRENDOUS landlords. It was a stressful time for many reasons and we were frustrated with it all. Its about the corporate fuckery that has taken hold not just in London, but in so many places. How these colourful cities are losing their creativity and soul because everyone has to work so hard just to pay the rent.

Hannah: It started off as a session between Keziah and myself, we used an 808 kick for the bass and experimented with the Nord Electro synth that gives it an almost eastern feel. When we came to rehearse and record it with Marc and Joy the song became a beast. This one really takes off in the live shows.

Keziah: This song was written in a jam session. It was a cosmic moment where it came together effortlessly. We had recorded and released it before this version, but we really wanted to give it that full sound, to capture that same feeling of the live show.

Hannah: One of the first ever Black Gold Buffalo songs, and the track that still has the most effect with an audience. From the first time it was played live , people were moving! It straddles that bridge of dance and live music. Orchestral, electronic and percussive drums married with an almost disco bassline, and catchy as hell guitar and vocal lines, with an epic breakdown. This has always felt like our 'pop hit’.

Keziah: We wrote this in a dingy damp rehearsal studio in N16. Joy came in with this cool jazz hi-hat rhythm, we added a ton of vocal layers and harmonies and kept the space in the guitar and bass. It all fell into place. I think you can feel the closeness (and moisture) of those studio walls in the intimacy of the track. It was at a time where I was going out a lot.... So there is most defintetly some post party blues lingering in the shadows of this song.

Hannah: Named after our original guitarist Anna, this was one of the first tracks we wrote with Joy, who gives it such an interesting vibe on the rhythm mixed up with programmed 808 beats. It has a haunting atmosphere, simple but layered. All sorts of interesting ideas came out of the vocal sessions using the backing vocals and rising synth lines.

Keziah: This is a love song plain and simple. "Something bigger than me” when you just can’t think of anything else but this person. A beautiful and total minefield. (I was actually really ill with the mumps when I wrote the lyrics to this song... not cute!) One of the first BGB songs written, we wanted it to be on the album but wanted to give it a tougher edge.

Hannah: We left this one til last and almost left it behind as we couldn’t find a way to make it sound as full as the rest. In an attempt to save it I spent an afternoon layering and harmonising simple basslines to a beat we had programmed in. Then we found a sampled bit of Joy’s earlier recordings and put a washy acoustic guitar on top, the only acoustic on the album. Again rising synths lifted it, with a bed of Moog Sub.

Keziah: Another Homerton tower track. I got obsessed with the band Light Asylum when I wrote this. I had been to see them play live and loved their absolute power! There was a lot going on politically that wasn’t agreeing with me. Lyrical themes... Nothing changes, Politicians lie, we want a revolution! Thats all.

Hannah: Again this track was really working live, but didn’t really translate in the studio. Whenever the tracks starts, it almost makes Keziah and I cringe at the 80’s ROCK vibe, but it all starts to make sense once you're into the song. This played live, with a lot of strobe lighting, is where it works best!

Hannah: So much fun on the synths for this, mostly on Nick’s Jupiter 6 and the Moog Slim Phatty & Rouge, all hugely beefed up from the original demo we put out a few years back.

Keziah: Such a vast matter, but in an age of information overload and finger activism, how do we really change things?

Black Gold Buffalo is out on 6 April via Buff Rekkids. For more information about the band, including forthcoming toru dates, please visit their official website.

Wye Oak's Track By Track Guide to The...