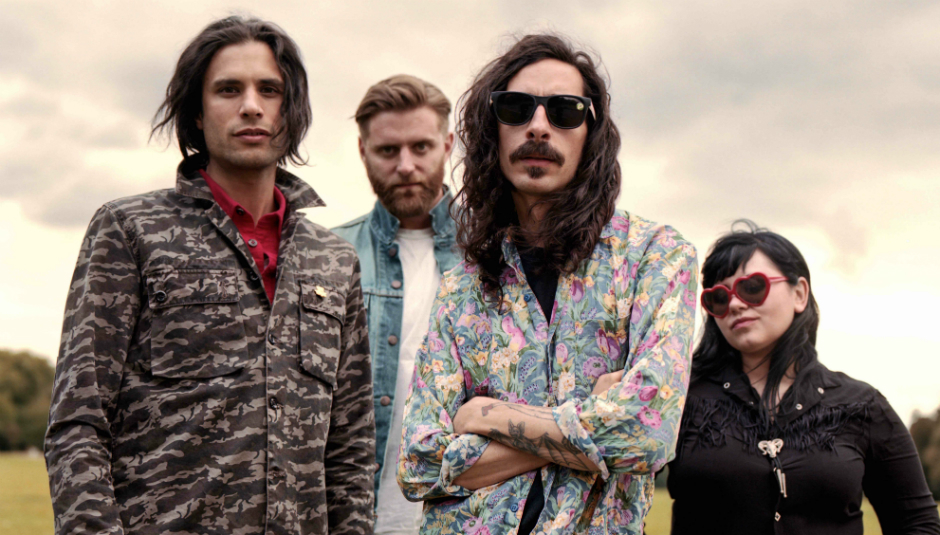 Grunge psych-rockers Turbowolf have this evil-magic thing about them. More than just their long hair, retro-synths, and howling-Sabbath like-riffs, the Bristol band have championed their own devilish sound that bleeds throughout their music like a ritual sacrifice during a full moon. The band, spearheaded by lead-singer Chris Georgiadis - the band’s preacher man, who delivers epochal sermons through their performances - is backed up by Andy Ghosh on guitar, Lianna Lee Davies on bass, and Blake Davis on drums.

The musical psych connection goes beyond your Deep Purples and your King Gizzards, with lyrical references to voodoo, magic, and alternative history. Graham Hancock, whose pseudoscientific interpretations of history even featured on the band’s previous LP, and his ideas of mankind being “a species with great amnesia”, resonate throughout the band’s work. Or at least, it sort of does depending on how you look at it. That’s the thing about Turbowolf - they allude to various ideas and concepts, but are loose about the concrete meanings. “I don’t want to feel like I’m not telling you what these lyrics are about,” Chris tells me during the interview, “but I am not telling you what they’re about.”

With album The Free Life already out - a record with an underlying narrative questioning our own ideas of liberty and free will - we quizzed Chris and Andy about the album’s true meaning. Or at least tried to.

DiS: The last time I saw you was supporting Dimmu Borgir?

Chris Georgiadis: That was one of our first tours of that size.

Andy Ghosh: It was quite fun. In the end, we became quite good mates with them; it was quite fun hanging out with these Norwegian black metallers. On one of the other German dates, they also let us wear their full corpse paint.

How does this new album feel differently to you compared to the previous one?

AG: It really sits in between the other two. Our first record was a more wild and ragged beast, while the second LP was us trying to improve our writing and performing - and we ended up refining things. Now when I listen back to it, I find it more refined than I thought things should have been. So with the new LP, I tried to push things back, and keep it more jarring and more … the transitions aren’t as smooth, and things don’t fit professionally together … we went more with our gut instinct. This one had the most hands-on control we had for any album. We pretty much did this ourselves - so it’s the closest to our vision than anything else we’ve done before.

The album starts off with this quote: “All for you, not for you, the free life”. What message are you trying to get across with this?

AG: The person speaking is Joe, from a band called Idles. He’s a friend of ours, and lives in the same city. As for the quote, it’s best not to explain and just let people make their own interpretation of it.

CG: That’s the more interesting thing for us, to pose the actual question, rather than giving people definitive answers.

It does seem to be a running theme throughout the record though - this feeling of predetermined fatalism.

CG: That’s one way of looking at it for sure. It’s more like we absorbed influences from our surroundings, and that’s what came out. I try and be loose with things and let words flow relatively freely. 'The Free Life' was set to be the theme of the album and everything that went into influencing it.

You use the term 'Snake Eyes' at the start of the record. As a reference to luck and random outcomes, would you also say it ties in with the theme of the record?

CG: I tend to let things spill out that is a way controlled, and not controlled. Things like that, 'Snake Eyes' - it being like a dice roll was thought about, but I don’t know if that’s about the whole album, it just fits into the general theme that we’re going for.

If we talk about the track 'The Free Life', it feels deeply layered in terms of composition and messaging.

AG: Definitely in terms of composition. It was specifically designed to be the crescendo of the album, but also to the track that we play out at the end of our live sets too. The track that ends the first album ['Let’s Die'] has been the set closer for the whole time we’ve been playing since that record came out. So this was designed to replace that and be a really big finale.

In terms of context, you say that it’s something that just came together, but when you play this on tour you’re going to have a crowd singing along to the chorus; “The free life is a dream”. It’s quite a profound comment to make amongst your fans.

CG: I don’t have morality issues with that, it’s open enough for people to draw their own conclusions out of it.

AG: I take it more of a question. The free life is a dream you aspire to, but it’s also a fiction that doesn’t exist - hopefully, that might open up the question in people’s mind whether or not the free life is an achievable reality, or if there is actually no such thing.

CG: And that’s a positive thing, for people to question whether things are as good as they’re portrayed. The great thing about any kind of art is how it effects other people and what they do with it.

AG: A lot of this is more of a reflection point than a lecture, not that we’re telling people how things are.

Is this why you featured Graham Hancock on the previous record?

AG: Well he was just a character that we encountered, who’s just a super interesting guy. We ended up meeting with him through our manager. At that point, we were just interested in alternative histories, and theories about the past that the mainstream opinion say there is a defined answer for, but when you look into it - you don’t really know what happened. The pyramids are an obvious one [Hancock’s claim that the pyramids are actually older than stated] - and stuff like that. So we were just very interested in that. He’s the sort of guy that raises a lot of questions. When he researches the past, he doesn’t say, "Oh it’s this, and oh it’s like that" - he just presents his research, and it shows that it brings up these questions, and questions whether the mainstream opinion is correct. In a similar way, there are points to consider and further learnings to be done.

Do you think there’s been some unfair criticism of people like Graham Hancock?

CG: I wouldn’t say unfair in terms of questioning, because that’s what this is kind-of all about, but stigmatism certainly. I think that’s what science and progress is all about, to understand the world and everything in it.

AG: There’s definitely a knee-jerk reaction towards people who present alternative theories that anything the mainstream believes is solid. There’s that unfortunate thing where if someone suggests that something is not necessarily how it’s portrayed in the media, then they’re lumped in with crazy X-Files, alien theory things - and often discredited in that way; I think Graham Hancock has suffered from that at points.

Do you keep in touch with him?

AG: We met him in London at a book talk, and have a bit of email chat now and then, but we’re not best friends or anything. If we saw him the street I’d stop and say 'hi'.

CG: He’s a pretty busy too.

There’s a degree of pseudo-scientific messaging that comes through in your work. Aside from your interest in people such as Graham Hancock, where else does this interest stem from?

AG: One of the big themes that runs through all of our stuff is to just question what you’re presented with. Question authority, and that ties in with questioning historical theories, politics. Anything. Musically that’s sort of what we’re doing as well. People who are in punk bands often follow what punk bands should sound like, and dress like that. We see punk rock as this confrontational spirit and challenging the norm.

So you would say that you’re a punk rock band?

AG: Yeah, sort of. But if you have to call it anything, we’re just a band. We really don’t mind what people call us. If you look at the early punk bands - there were a lot of varied, interesting bands with a shared spirit of rebellion.

Talking about Graham Hancock, at the end of 'Very Bad', there’s the lyric "We are not human that much". Is that influenced by Hancock’s work?

CG: It’s a possibility. I try to percolate a lot of different ideas and thoughts and see how they come out. I have my own personal thoughts about what particular lyrics could mean, but I try to keep them as my own, and let others get their own meaning from them.

The chorus for that track also talks about searching for a 'knowledge key'. Does this also come from a similar mindset?

Having this approach to encourage people to engage in knowledge, can’t really be directly approached in your music, right?

CG: I guess you can if you do it a good way. We’re just trying to create an atmosphere where people can walk around and suck in this stuff that’s floating around.

AG: Knowledge is a positive and powerful thing and it should be there in your life. We don’t have all the answers, and don’t want to give a lecture about people should live or think, but if we get people thinking in their own way that would be great.

So the album is a catalyst for getting people to change things. How much more can people change and be open to things?

CG: I would like to think there is a large amount of kindness and compassion in what we do. That’s something I would personally like to see more of in the world. I’d like to think that message of hope and understanding and people listening - I would be happy if that made it out of our music.

So that’s why you’ve switched out the last song of your sets from 'Let’s Die'?

CG: Good point. I think it’s actually because we’ve been playing 'Let’s Die' as the closing track since the last time you saw us. It was time to change things up.

AG: 'The Free Life' was designed to be the curtain closer, and it does have the messages we’ve been talking about within it. In a way, you could say we are refreshing the final messaging we want to give. We wrote 'Let’s Die' probably about ten years ago, when we were younger and less wiser.

You’ve been playing together for over ten years. What’s kept you together all this time? Some degree of magic and spirituality?

AG: It just works - we have this telepathic connection and have a shared vision of it all.

CG: We don’t really stop to look around that much - I don’t know if that’s good or bad. We just do it, it works, and we make music that we both like, and some people like it as well. And that’s pretty good for us.