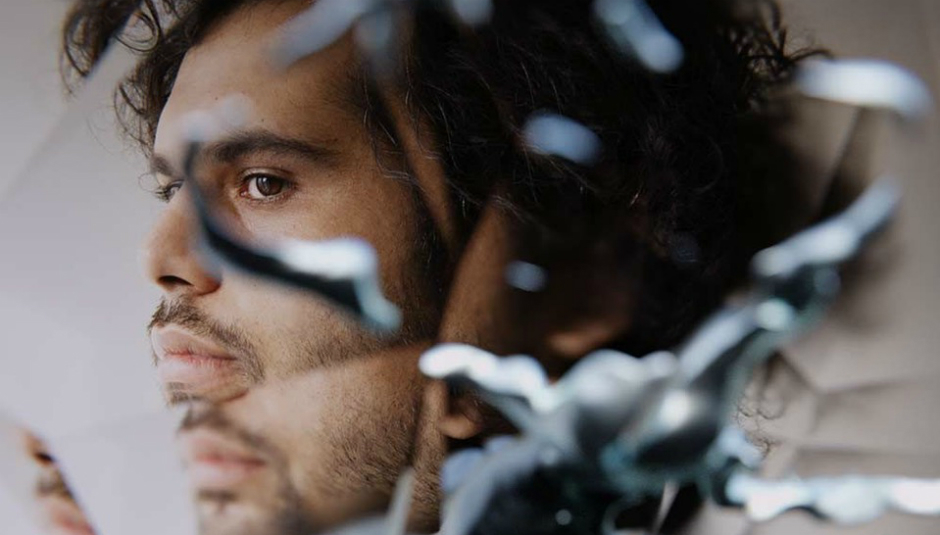 A vital figure in Iran's underground music scene, Mahdyar's dauntless electronic architecture fuses restless fractal beat structures with warped Persian motifs and instrumentation. The Tehran-born producer made his initial mark as a teenager producing the majority of the newly emerged Persian Hip Hop movement at the age of 16, and has produced a number of acclaimed Persian hip-hop albums.

Retaining the grit and urgency of his hip-hop roots, Mahdyar sonically aims further off-the-grid, building crushing, feral soundscapes in constant flux. Dark and provocative, his debut album Seized’s frenetic energy reveals itself slowly and purposefull, toying with structure form and identity. It paints a tense portrait that evokes images of abstract forms, twisting and mutating, and cycles through an array of themes and visual cues, often alluding to the horrors of war, greed, and intolerance.

It was originally written in 2011 but at the time it didn't have vocals. The idea was to make a modern melancholic intro with typical electronic instrumentation but with an unpredictable arrangement. Also, it had to give some sense of opening and entering some sort of unknown territory. During that time I was kinda obsessed with sound textures and details. I had just arrived in Europe and the European electronic scene had impressed and inspired me in that regard. Also, I had done some gigs which for the first time allowed me to hear my music played through speakers that were louder than studio monitors and car systems. Long story short, it was extra important for me to program synths and effects to create the exact sound I had in mind. Later in 2015 when I picked it for the album, it needed more character in order to blend in with the theme and the concept so I decided to add some warped Persian traditional vocals that I had recorded back in 2006 in Iran from a good friend and talented singer called Bidad.

I originally wrote this in 2010 for the soundtrack of a performance to be played by a quartet in a museum in Paris. I ended up not using it in the soundtrack even though it was one of my favorite compositions. Later I recorded it using my violin and some plugins over a 3/4 beat. My initial thoughts behind the track were around the concepts of class, status, luxury, and elitism which, looking at the current world, boiled down to money. The concept behind the arrangement is illustrating a closed cycle that reproduces itself in different forms but with the same core and that's where the repetition of the word "money" comes from. I edited some of the vocals I had from my good friend and great musician Ash Koosha to make it seem like he's singing "Money Money" with some sort of accent.

I made this track in 2011 for an unfinished documentary about Kaveh Golestan, a remarkable Iranian photojournalist who lost his life in Iraq by stepping on a landmine. The concept behind the track was basically "war in Iraq", which at the time of the composition was more a reminder of the US-Iraq war to me since that was the most recent and one that I could remember. To me, it seemed like the US was using its power to bully Iraq and take control of the region which in fact actually led to more instability in the region. I later added the vocals of "Timmy might bury y'all" at the end of the track by transforming the vocals I had from Ash Koosha.

In Iran, I used to record many vocal samples from the traditional singer Bidad. In 2006 I decided to make a song using Bidad's voice as an instrument with quarter tones over a 6/8 time signature which is a very common time signature in both Iranian traditional and commercial music but not so widely used in Western music as far as I’m aware. In terms of arrangement, I was more inspired by other forms of storytelling in art such as paintings and films. In a way, I was avoiding a verse/chorus structure and this approach can be seen in the majority of the album. As for the concept of the 'Vow', the original title was 'Qisas from the World'. I was thinking about different forms of extremism that exists all around the world, which is one of the main concepts of the album.

I made this in 2012 while I was thinking about the current era of industrial manufacturing that we are in which is technology and more specifically its usage in surveillance. Later I added some vocal chops from a very talented underground Iranian rapper by the name of 7Khat whom I lost contact with since 2008 when he left for Iran's military service. I'm hoping this increases the chance of finding him somehow.

Iran and Iraq were at war with each other in the 80s. It was a devastating war which cost more than a million lives. I heard a lot about the horrors of that war from my father who was a soldier during the war. It probably wasn’t the best bedtime story to tell a kid but at the same time it made me realize that the abstract concept of an “enemy” is actually a social construct; all the soldiers from both sides were victims of higher powers. I made the track in 2016 and used some vocals from the father of Persian hip-hop Hichkas to deliver more of a message than may first appear.

I wrote this in 2007 as a duet for 2 Kamanches. Sometimes in harmony in order to help each other and sometimes in a battle for dominance. The idea was that a person has two images of self, one that they project externally and the one that they internalise. If these images of the self are at conflict, the person will be trapped in a cycle of building and self-destruction. An internal war with armies in khakis. There's also a connection in the word's root; it actually means “dusty” in Farsi, the word made its way into the English language via Urdu (with which Farsi shares a linguistic root) during the years of the British colonial rule in India. In modern Farsi, “khaki” can also be a slang term for one who is humble.

It's an abstract take on the feeling of running from something for a long time. Eventually, you will reach a point where you have to either stop and face it or get used to running. In 2015 I was living in the south of France and there was a 6-hour train trip which I used to take a lot. I made many tracks on my laptop during those trips, 'Running From' was one of them.

Lust was another track that I made on the train in 2015. A deep and slow rhythm that intensifies as it goes alongside exotic melodies.I wanted to make the track sound mellow but rough at the same time, the idea I had in my mind was jagged smoothness. I later added some warped Daf recordings as the percussion and some vocal samples from underground Iranian R&B artist Eshragh.

I wrote this in 2011 with the idea of a hope that doesn't really exist but in which you still believe in order to keep you going. One of the forms of its manifestation is on the bass with the side chain compression which reacts to a beat that doesn't exist.

This was the last track I made for the album in 2016. It was during the Trump campaign and the title is quite self-explanatory. I tried to make a twisted beat where it seems off in a way but you still can get the groove. The track features vocal samples from a good friend and underground UK hip-hop legend Reveal. Close to the end of the track I've also sampled vocals from multiple old Persian songs in order to create an effect that exhibits the cycles of the blind repetition of words and ideologies that spread and change as fast as trends.

Seized is out now via Kowloon Records. For more information about Mahdyar, please click here.

"This is as brutal as we've ever been...