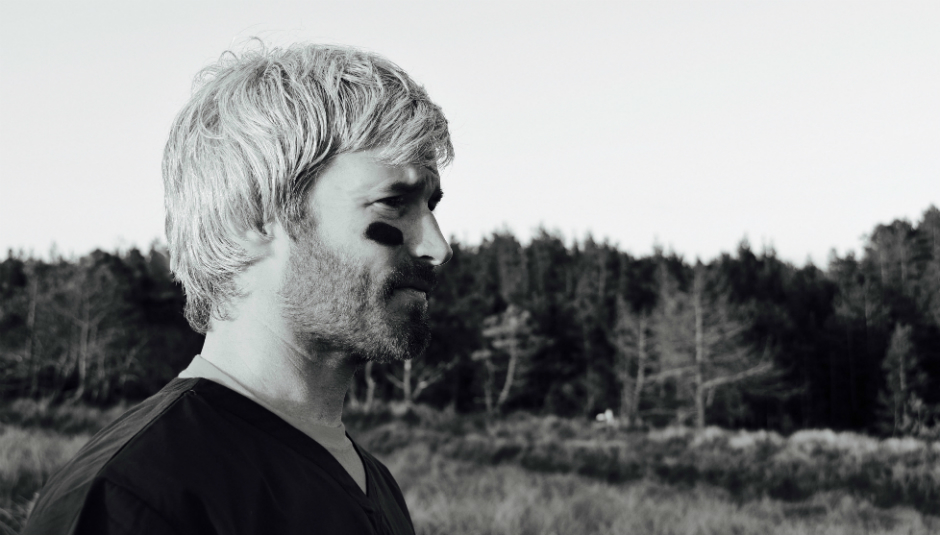 The music-making moniker of Irish producer and multi-instrumentalist Keith Mannion, Slow Place Like Home quietly released one of the most idiosyncratic, homespun albums of last year in the form of When I See You… Ice Cream! Based in the remote Knather Woods of Co. Donegal in the North West of the country, we talk to Mannion about thriving beyond the main musical cities, collaboration and what informs his very own brand of psych-tinged electronica.

Keith Mannion: The very beginning was far from stellar. It all began in earnest about seven years ago and the ensuing experiments took shape around a year later. I had to seek out several different types of software and then find the time and patience to learn it all, from scratch, by night. Because I was self-taught and my gear resembled kids toys, I had to find a solution through certain production techniques. I discovered a way to do all of this, where it wouldn’t cost me an arm and a leg, but eventually I ended up selling a lot of equipment I had in order to fund the cause. Nowadays I just love hearing people rant about tech as if it is more important than the songs they create. It’s terribly amusing!

Anyways, I passed some early tracks to radio DJs such as Aoife Barry, Cian O’Ciobhain, and Dan Hegarty here in Ireland. They actually played them and had nice things to say about the first batch. I was inspired to make music for more than just myself. That was a sort of awakening period.

When I See You … Ice Cream! is your second album. How was the recording and writing process for this compared to your debut?

After a rather tiresome and protracted experience writing my debut album, I just went berserk writing over a period of 3 months for this. It felt like an agitated purge.

Gone were the days of worrying about retaining production techniques and unforeseen gear melt-downs. Yes, bloody TECH again! After a previous laptop wiped most of a first draft of my debut album, I learned valuable lessons.

I withdrew completely from doing anything outside of work and writing in late 2016. It was extremely taxing (on those around me) but the songs kept popping out. I got a chance to spend some time in Portugal during this window. I knew composing some of this record away from the usual constructs was needed and it brought about a fresh creative mindset. On return, I just re-adjusted my sights to what I felt I needed to do to complete the arc, on the production side of things.

You’ve some guest contributions on the album. Tell us about that and how those came about.

Well, I have been a fan of Laura McGarrigle aka Gaze Is Ghost since I first heard her on Stephen McCauley’s fabulous ‘Electric Mainline’ show on BBC Radio Foyle. I then played a live showcase with her, for the station, back in 2014 in Derry and when I saw/heard her play live, I knew I wanted to collaborate at some point. So I reached out to see if she had the time to maybe sing some vocals. She was so friendly and obliging about it and came over from Edinburgh to the Eden Vela studios in Kinlough to lay down an astounding vocal track. Knowing she had just gotten over the flu and wasn’t 100%, made it even more impressive. One thing I do know about Laura is that she is the real deal.

With Fearghal McKee, it was quite different. He is well considered, one of Irish music’s fearless lyricists. I was thrilled that he agreed to get on board. Being a big fan of Whipping Boy, I was rather excited (and nervous) that he was so eager to take part in the album. At first, I was a bit anxious about passing over my lyrics to him but he understood the story behind them. His vocals are to die for and when he and Sonya came to stay with me for a few days (to shoot the brilliant video by Michael Liston), they left me with a bit of extra pep in my step! For me, having both of those luminaries on my record meant the world to me.

You live and make music outside of what might be seen as main hubs of Irish music. Do you think that has worked to your advantage?

Yes. I don’t think I would have made this music if I was strung out in some city, wishing I didn’t have to hear the sirens at night. Besides, the SPLH music is totally inspired by the Atlantic North-West here. Nothing encompasses this music, quite like the Sligo/Donegal coastline, as the music interprets it back! The spirit of the project is deeply-rooted in this region. A mixed bag.

Generally speaking, do you think there’s any real advantage to being part of the bigger “scene”?

Yes and no. I couldn’t care less for being geographically close to the main cities right now but it is also a grind being a great distance from them. Speaking in terms of when I was looking for slots at shows and the majority of the time, you would come out of a gig in the financial loss bracket. Very few bookers are able to pay money for a relatively unknown act to come to play, for fear of making a loss. It doesn’t make good business sense for them to do so.

It goes back to the difficulties for acts on the modern circuit. Anyone on them will tell you without any doubt, it’s a total slog. I’ve seen outfits disband over the past few years because it is far too much of a financial strain. It’s far more cost-effective to just throw the towel in and be a covers or wedding band in the modern climate. I’ve learned through time, with this project in particular, that you need to be a tough cookie.

We are all a big bunch of people, just trying to find our way in this ever-changing industry! Donegal is rather out of the way though. I note that I am seen as a ‘Southerner’ by the Northern Irish music scene and a ‘Northerner’ by the Southern Irish music scene. Unless I write a generic pop hit, it’s difficult to be noticed. Grants are non-existent for me, as I don’t fall into the ‘generic pop’ bracket, so up until this album, it meant I had to mostly cover costs.

Although it’s your project, you’ve also had different musicians play as part of the band over the years. How has it been re-creating your sound on the live front?

The two guys that are playing with me now (Ciaran and Sean) have been with me for over two years. When Ciaran joined, he concocted a new live set-up. A more streamlined approach, for adjusting the new compositions to the live stage. Of course, it has evolved into a more complicated mechanism nowadays but that’s always going to happen, when you are trying to improve your rig. On the balance of things, we jam quite often. So we have gotten to understand each other’s styles and abilities a great deal more. It always takes a band time to gel but the past year, in particular, I feel we have a vastly improved, somewhat unpredictable vibe.

You’ve clearly got a wide range of influences. But are there a couple that you feel have made an imprint on your whole approach to making music?

For sure. From Keith Jarrett to ESG. Ella Fitzgerald to Vangelis. In the past, there was a broad spectrum of music I drew on for worthwhile dissection. But to be quite frank, I think everyday life is a major influence. The very people around you. Your psychical surroundings too. Sorry to be so mundane about it but it’s not just musical heroes who count on this one.

The new record has mainly been influenced, by the time I spent around some very special people. One of whom (a then seven-year-old) Kaila, even coined the title of the album! She has changed my whole outlook to making music again. They all have.

Which Irish acts are you currently listening to at the minute?

I consciously don’t go seeking contemporary acts anymore, as I would hate to cheaply rip-off a clever idea that someone has tirelessly tried to perfect. There are too many boring (Thom Yorke, Jose Gonzales, Sigur Ros, Kate Bush… you name it) clones out there. Of course, I pen some songs in the conventional sense too but I would far prefer to try and transgress the supposed limits of this project, specifically by way of my own experiences. In saying that, I have been fortunate to play alongside a fair few Irish acts over the past number of years and there is an array of unheralded talent on this island right now. There are acts from so many different genres that I hear by chance like Sister Ghost, Beauty Sleep, Participant, Carriages, Paddy Hanna and the aforementioned Gaze is Ghost – peers that are not necessarily being given their dues in this country.

I’m a big fan of The Cyclist from Derry. His Bones In Motion record (2013) was masterful. He is justifiably becoming successful in his own right. He recently did a remix of one of my album tracks. It should be on it’s way into the public realm soon.

The album is just fresh, so it’s time to showcase it to the public, live. I have some remixes for other folk and I’m constantly writing new material. So I’m kept occupied. Myself and the band recently toured with Fujiya & Miyagi and we traded tales on the risks and obstacles that stand before artists on the circuit right now. They have been going for well over a decade and manage to retain their civility. But we’ve got determination on our side.

Also now being on the Strange Brew label, based in Galway, my manager Gugai is on the ball, whereas I would probably have taken my foot off the gas by now. I’ll be releasing a new single from the current album early in the 2018 and there will be some bits and bobs to go with it. Tour dates in UK and Europe to follow. Also, I’ll be collaborating with someone quite interesting down the road. All in good time!