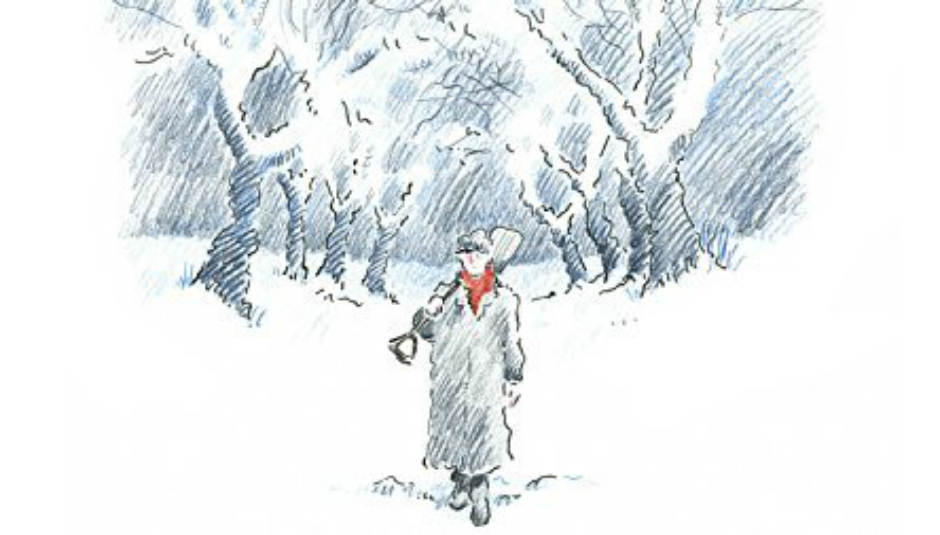 On a bitterly cold evening, as Britain becomes blighted by a bleak mid-winter, a queue began to form outside the Union Chapel. A Dickensian clock above us illuminated the dark. Inside the cosy chapel, flickering tea-lights girded the rafters, two big Christmas trees sparkled, woollen-hatted and mittened patrons cupped marshmallow hot chocolates. There was even a ticket-checker who bore a striking resemblance to Father Christmas himself. The scene was set for the modern, musical, Maccabean Christmas Carol ahead.

The crowd had gathered to witness a one-night-only performance of Orlando Weeks’ The Gritterman, a joint-released book and album that tells the story of an aged, forgotten widower on his last night of work on Christmas Eve. It is Weeks’ first output since The Maccabees split earlier this year, and the tight pews of the intimate space contrasted with the grand-scale expanse of their farewell shows in July.

Before the main event, sound artist Sami El-Enany provided a cosmic, mystical mise-en-scène of swirling lights that transformed into mechanical cogs against the wooden ceiling. He turned one knob to generate pattering sleet, another crafted sustained strings, then hypnotic chorals, then shattering sleigh-bells. This haunting atmosphere then dissolved into a wasteland of static, and the world returned to normal.

After a protracted break, Weeks took to the stage, introducing the main act with a disarming humility, given his legendary achievements and effortless cool. He requested no applause until the end of the evening, allowing the piece to proceed unbroken. Joining his lead vocals were five choristers from London Contemporary Voices, accompanied by two pianos, two guitars, two cymbals, and a mixing desk. Above him, narrating/performing from the ornate pulpit was the Gritterman himself, Paul Whitehouse. There was a communal sincerity from everyone involved, all focused on the collective pursuit of delivering what was a stunning night of art.

The book and album are written with heart-warming humanity and endearing observations. Where blockbusting Avengers now receive a collective shrug of apathy, this small-town seasonal hero demands empathy. Emotion supersedes action. The strength of Weeks’ work, much like in Mackenzie Crook’s Detectorists, is in finding magnitude in the minutiae, significance in the insignificant. Some might cynically call it quaint, but it never risks being twee since there is a genuine commentary on the changing world we live in affecting the lives and livelihoods of real people. There are some comedic asides on the ability nowadays to cook a meal in three minutes (“Talk about the miracle of Christmas”), or the arrival of a tanning salon on a suburban/rural highstreet (“Suppose there’s no point now”); but this is coupled with a wry remark on the coldness of modern-day bureaucracy when he is unceremoniously laid off (“I’ve done more years gritting than there were letters in that letter”). Is there even, perhaps, a cryptic nod to modern culture in the line “Lost and confused things, snowflakes”? Just like the photographer in Bridges Of Madison County, we are forced to confront the growing obsolescence of old-world obsessions, traditions, and expertise. At Christmas, we are often told to remind ourselves of the things that really matter, and The Gritterman captures that message with perfect idiosyncrasy.

Though the multimedia effort of the book, album, and Weeks’ own illustration find wonderful harmony in themselves, the live performance elevates it to a piece of genuine art. Weeks acted as occasional conductor and poured himself into his performance. Whitehouse’s sermon-like delivery from the pulpit found new poignance: spotlights either side of him provided angelic wings; the light caught every page turn, transforming it to silver for the briefest of glimpses; the eulogy in the stunning ‘Seasonal Hero’ resonated even more shatteringly than before, as the stained-glass windows glowed above. The crowd were even invited to join in for a humourously curtailed singalong of ‘In The Bleak Midwinter’. Sound effects and lighting played a significant part in creating this wintry milieu, whether bathing the stage in the dark blue of midnight, dappling the walls with snowdrops of light, or swirling the air with turbulent gales. All of this built spectacularly to the extra-terrestrial dream of a denouement, as humble realism blended into overwhelming escapism. As Weeks meekly thanked the stunned-silence to announce the end, the crowd rose as one with a more heartfelt ovation than I have ever experienced. This was a rare and affirming case of human enterprise and spirit coming together to elevate the simplicity of everyday life into an experience of genuine significance.