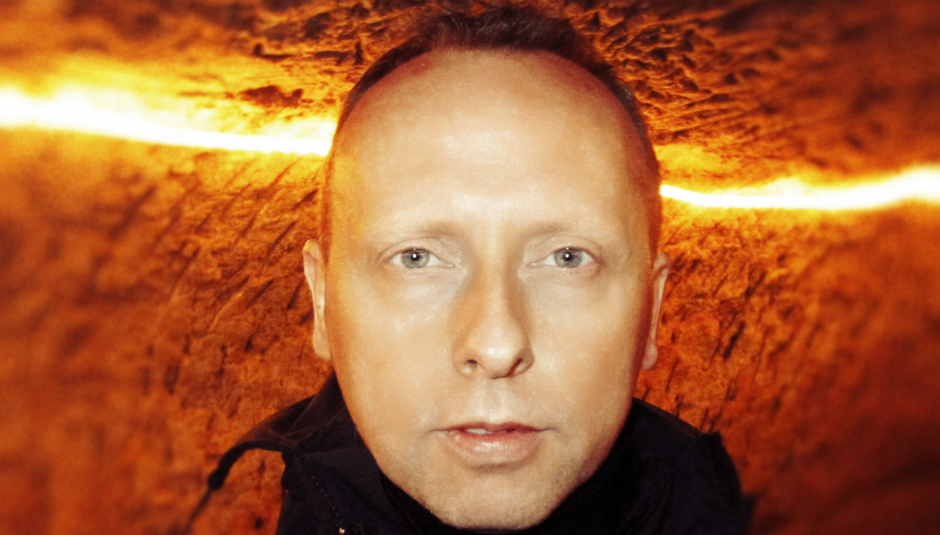 Having been kept busy with commissions, soundtracks, and strange projects this is the first studio album since 2009. In this time much has changed – he lost his entire family and left the comfort of a familiar city, London, to live in a former textile factory in the UK to re-invent his life. Fibolae offers up a world that splinters between melancholia and penetrating energy. Combining digital technologies, software and live instrumentation it is both a rhetoric of mourning and a celebration of music to empower. Warm, organic, sensual, passionate and frequently angry, it’s an album that radiates with possibilities.

Rimbaud gave us the lowdown on the ten tracks that make up his stunning return.

Loss is never an easy thing and this opening track was recorded less than a week after my brother died in rather brutal circumstances. It opens with recordings of answer phone messages from many other people I’ve lost over recent years, from my family to friends. The circumstances perhaps explain some of the anger and sheer intensity of mood captured within it. It’s physically hammering out the pain, and then ends in the quietest possible manner.

Exotic and hypnotic, this tune began with the percussion, inspired by the complex polyrhythms of Bill Bruford when in King Crimson. Add to that the kind of winding guitar and atmospherics that would find on Brian Eno’s Another Green World (1975) and it conjures up a drifting Amazonian sonic forest, warm and inviting. Much of this was recorded live with no attempt to ‘tidy’ it up afterwards in the computer. I always endeavour to maintain a live feel within the restrictions of electronic music and computers.

Nothing Happens Because Of A Single Thing

The slippery rhythm was the starting point for this piece. I used Madrona Labs Aalto synth to create many of the textural sounds within the piece and was especially happy with the broken voices and harmonic voices that make an appearance some way in. it’s arguably the most electronic piece on the album.

This was inspired by the work of early English composer John Dowland (1563-1626), who wrote the most astonishing piece of music centuries ago with a majestic title – ‘Lachrimæ or seaven teares figured in seaven passionate pavans, with divers other pavans, galliards and allemands, set forth for the lute, viols, or violons, in five parts.’ I was a teenager enraptured by the music of Nick Drake, Brian Eno, and Faure, absorbed by the poetry of Rupert Brooke, John Donne, Robert Lowell and Samuel Beckett, and the artwork of Francis Bacon and Vladimir Mayakovsky. Lachrimæ was in itself an enticing word and without recourse to Wikipedia or online resources at the time, it remained an enigmatic inscription for some time, seducing and intriguing me by the very strange architecture of the word itself.

Hearing the work for the first time on a well-worn cassette borrowed from my local library revealed this outstanding piece of music to me, unlocking the mysteries in a profoundly emotional journey. I was delighted to discover that Dowland’s work resonated with the cult of melancholy that ran deeply through 16th century art and culture, a sadness that was both personal but with universal appeal. A work of such great pathos touches the soul in such a spiritual way, following a line that connects us back to the late 19th century romantics and the immediacy of contemporary minimalist music. So I wanted to update this in a modest manner using electronics and with a modern sensibility, to make a work that passionately moves the listener.

What I’d call an interval piece, to offer time to breathe. Recorded live with no editing, using found voices from my archive, treated beyond comprehension. It’s like a little pause in the middle of the album to offer the listener some respite, ready for the next cinematic injection.

This work began form as a soundtrack for a sadly unfinished film / performance series, using hidden spaces beneath buildings in London. The percussive sounds were recorded in the basement of The Museum of Childhood in Bethnal Green, hammering on the pipes. I left it deliberately bare at the opening to let the rhythms resonate, so when the strings swoop in it’s a significant shift in mood, almost unexpected.

A piece of sonic driftwood, with found voices and textures floating through the sonic field. I began the sketch for this in the hospice, then added the voices from my 1980s archives, indiscriminate voices drawn from the radiowaves, anonymous and blurry, using the radio scanner. I like that there’s no centre to this piece, it simply moves forward in an almost abstract way.

I created this whilst on a train in The Netherlands, watching the landscape pass by. It began with the percussive sound, hollow and echoing. I’ve always found the work of the minimalist composers like Steve Reich, Terry Riley, and Philip Glass to be a constant source of inspiration, so this follows their kind of approach and by nature of its length (1.45) is quite literally minimalist.

A rather heartbreaking piece based on a found conversation of a woman taking care of her mother whilst suffering from some form of dementia. Again, it was recorded live in the studio and builds to a wildly improvised close, using white noise as a metaphor for pain. There’s no quantisation of the notes or melodies, as I wanted to ensure this capture a sense of reality. It’s a kind of heated prelude to the closing song, with the anger just under the surface, bubbling to escape.

I had in mind the sheer passion of Swans in the use of drums here but introduced a kind of minimalist Steve Reich string pattern into it to open it out. I’ve always been fond of the dulcimer, which is introduced later on, and as the track speeds up I’m rushing towards a close that leaves the listener spent and stirred. The close of the record is always something I take great care about. It’s what people remember. It feels personally almost like a cleansing process by the close of this track. Again as an electronic artist I wanted this piece and this record to offer up an alternative picture of what can be produced beyond the confines of ambient and dance music and to mirror and somehow illustrate the intense pain of loss, far beyond words. Music can possess that power, as we all know.

Fibolae is out now via Pomperipossa Records. For more information about Scanner, please visit his official website.

The Pains Of Being Far Apart: DiS Mee...