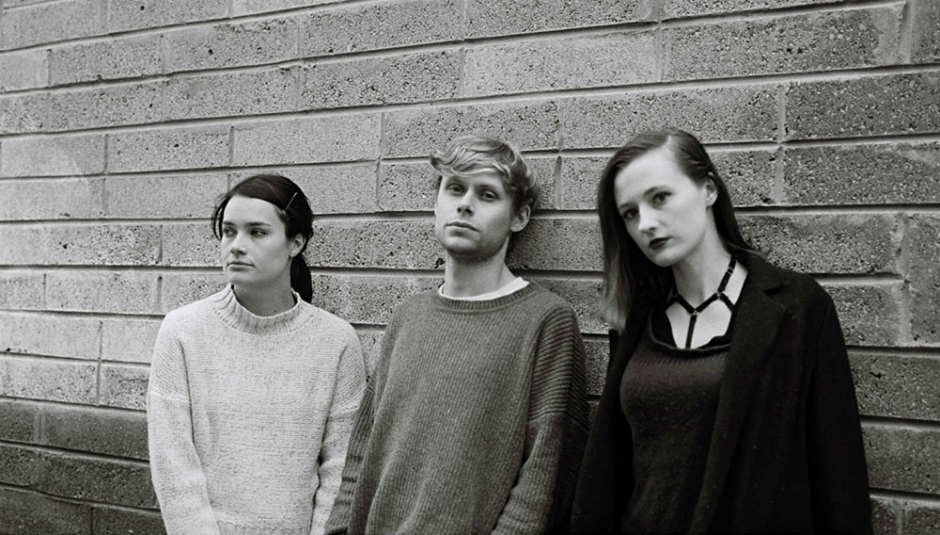 DiS: Take us back to the very start of Alien She. How did the band come about, and is there a significance to the band name?

Alien She formed when Katie (O’Neill, guitar/vocals) and Aoife Mairéad (bass/vocals) met through going to punk gigs and parties and ended up in a feminist group together. At the time it felt like there weren’t many women in punk music in the Dublin scene and being in a band was something we both wanted to try, both of us had musical backgrounds but not this experience. Katie and Darragh (McCabe, drums) had been friends since their teens; Darragh had been performing music (and still does) under the moniker Jon Dots and we gelled quite well as a band even with our mixed musical backgrounds. Our name is the title of a Bikini Kill song we liked at the time, but it also represents some of the things the band was about exploring in a creative sense namely, alienation and gender.

Aoife is a poet and writer, Katie is an artist and solo performer, and Darragh is a writer and musician. Do you feel that that diverse creative background lends to your approach?

Definitely! It is actually quite fun having different approaches to writing/performing because of this, and we’ve really grown as a band doing it over the years. Darragh has a lot more experience with producing also so that lends an interesting angle sound wise. Our musical backgrounds are totally unique too, both Katie and Aoife have professional musicians for parents and what we all heard growing up was very different. Aoife didn’t hear any “electric” music until the age of 12, except for theme songs on TV and ads because her family were trad/folk musicians. Coming to music from a poetry background just brings a different lens, and as Darragh and Katie have their own solo projects that sound quite different to Alien She, that adds other approaches. The band is this kind of melting pot of experimental stuff, but we’ve kind of found the sound(s) we like.

You’re just about to release your debut album, Feeler, via Art For Blind. What are the main themes – obvious, obscured or otherwise – that run through the album?

Alienation, oblivion in chaos or addiction, losing yourself, for better or worse, frustration and release. Some of the songs were hoping to capture that frantic manic feeling that overcomes you sometimes with addiction or chronic confusion, often a result of the society and modern world we’re in along with the ever difficult pain of having a head. We’ve found a lot of solace and joy in music ourselves throughout our lives and making it is also very therapeutic and celebrant for us all. If we express ourselves on difficult topics and people can connect to it, that’s kind of the goal achieved.

There’s a real eclecticism that defines Feeler. Which artists do you feel have had an imprint on your sound recently?

The three of us listen to so many varied genres it’s no wonder it sounds eclectic. We talk about music an awful lot, we’re constantly sharing songs, and it can vary greatly! Katie is very inspired by the history of solo experimental female artists, from Yoko Ono to Anohni. She loves Circuit Des Yeux and Laura Nyro and CC Dust, all these groundbreaking artists in terms of bringing a performance art, political and expressive element to her sound.

Aoife loves bands like Priests and Fever Rays in a similar vein. We’re all big music nerds and constantly sharing things we find. We’re fans of the weirder side of punk, bands like The Raincoats and Kleenex. Bands who seemed to fit into nowhere and fell under the label punk. We felt really compelled by the noise chaos of bands like Perfect Pussy and Xiu Xiu. We worship the hypnotic warmth of the shoegaze of My Bloody Valentine. We’re also fans of quieter heartfelt sounds such as Cat Power, Portishead and Mazzy Star. We’ve been listening to a good bit of Beach House lately, too. We’re fans of all the classics, Nirvana, Sonic Youth - the bands that paved the way for weirdness.

We’ve been enjoying some dark electronic stuff lately. Currently a lot of Cocteau Twins and a bit of Slint. The live sound is always evolving. I think Radiohead put it very well when they said they were always consuming so much music, their sound would constantly evolve. We have a similar love. We’ve probably been listening to more alt-pop and electronic stuff since the album was recorded, but we’re definitely always got open ears.

You’ve said that your songs come together from poems and personal experiences. What is a typical Alien She songwriting session like?

Fun, manic, extremely productive jam sessions for a whole day or night where we try to roughly record what we can and frequently shout out at the stuff we like. We might get a little lost in the repetition of a riff or an idea and see what we can make of it. Then we come back to them later, calmer, and give them some shape. There are usually a few notebooks of lyrics/poems lying around that we’ve written over the last while, though sometimes we ad lib. They tend to let a lot out that needs to come out. Sometimes Katie will come to us with a more structured song idea or twenty and we develop them, it depends on the day.

Although you’ve been around a few years, 2016 was really productive for you as a band. Why do you think that was?

2016 was a nightmare in a global context, there were many political shifts people were shocked about, and the collective trauma of this certainly affected how people are and were feeling. It was important for us as artists to articulate these mixed feelings. We were all really invested in finishing the album so we’re glad it’s finally out there! Having the ability to work on this was what got us through 2016, in ways.

You've always put social and political concerns at the heart of your music. Do you feel that’s a major part drives the band and inspires forward momentum?

The album expels some of the frustration we’ve felt for sure. For example, the song ‘Death Sentence’ was written in response to the needless and tragic death of Savita Halapannavar due to the lack of abortion rights in Ireland. It’s shocking that we’re still waiting for a change in that but we live in hope that 2018 will bring about progressive change and acknowledge the bodily autonomy of all citizens. The personal is political and we figure music and art connect people, so expressing personal experiences can be a way of articulating social concerns on a grander scale. Expression is the opposite of depression so art is really important on a personal and a political level. The three of us are quite emotionally sensitive people so this expression and understanding is really cathartic for us all. People may think “entertainment” doesn’t change opinions but these days most people consume their news through their media and their impressions of social and political concerns come through their online bubble, so it’s definitely more important in forming opinions than many people realise.

The island of Ireland is thriving at the minute musically. Which acts are you’re currently listening to?

Finally, with the launch of Feeler via Art For Blind, you look set for big things in 2018. How are hoping things to pan out over the next few months?

We’re hoping to gig a lot around the country and further afield, and hopefully get our music out there to a wider audience. We’re also dying to get back to writing and recording as 2017 was a very inspirational year for us all and we have plenty of ideas.

The Pains Of Being Far Apart: DiS Mee...