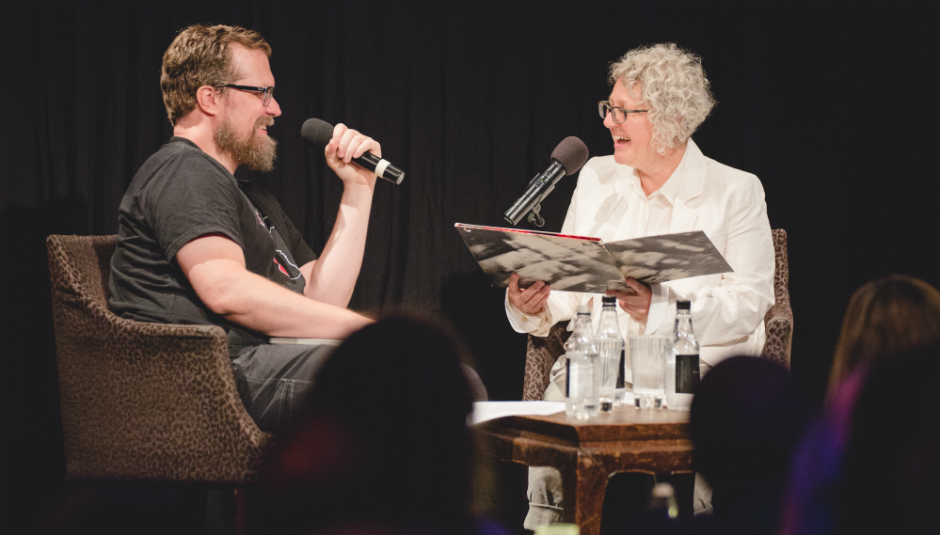 With a rare public appearance of the elusive, ethereal singer of the Cocteau Twins, Elizabeth Fraser, interviewed by the artful singer-songwriter John Grant, this event brings together two very distinguished artists to discuss the seminal album Fraser and her band released in 1988 - Blue Bell Knoll. Grant set the tone of the evening before the event had even begun with his statement in anticipation of the night: “Blue Bell Knoll is one of the best albums of the eighties – and of all time. I get to talk to Liz Fraser about the creation of this masterpiece and you don't, so there!” A certain degree of fawning was always to be expected considering the godlike status of Fraser in much of the music industry, which Grant maintains throughout, and Fraser is similarly complimentary of him, particularly of his “zen” interview style. Along with the adoring audience, this ensures the night is full of tenderness, flattery. and collective good will that could be construed as sweet and cheering or a little icky and overblown depending on your point of view. Either way, the night jaunts along with a fairly free conversation that remains rooted principally in the music itself more than anything else, which is ironically not always the case with interviews with singers in this age of glitzy gossip and pop stars with their own paparazzi. The midpoint of the night even features Blue Bell Knoll played on vinyl for its full 35-minute duration, whilst everyone simply sits and listens. If the rest of the industry had a similar brazen veneration for music itself, you can’t help but feel that we’d be living in a better world.

Here’s 5 things we learned from that conversation.

Once described as “the voice of God,” Fraser’s singing has an otherworldly quality that betrays convention and ensures that no comparison with her to other singers ever feels satisfactory. Coaxed out by Grant, she reveals that her vocal style was greatly influenced by the a cappella recordings of Bulgarian folk singers. After coming across the cassette of Le Mystère des Voix Bulgares, Fraser decided that she would learn it by heart and that it would be her “teacher and her home.” These Bulgarian women sing melodies that sound like they come from an era long gone, full of spiritual power that pang with religious authority, akin to the Muslim call to prayer or hymns sung by choirs in medieval cathedrals. After a single listen, the lineage between their songs and Fraser’s celestial, intricate harmonies becomes abundantly clear. They could explain her willingness to sing sounds of her own creation rather than words, as she sought to give her own vocals a similar aura of divinity. Listen to Le Mystère des Voix Bulgares here.

2. Both artists have sincere gripes with technology

In this age of glaring, seductive screens that we feed off as if it’s some kind of lifeblood for every 21st century, first world civilian, criticisms of technology are becoming as widespread as the plastic and silicon that invites our ire. Grant and Fraser clearly have no desire to buck this trend. At the beginning of the event it was announced that no recording of the evening would be tolerated, nor would the visible presence of any mobile phones, sending us music writers hurling back into the 20th century and reaching for our trusty but rather inefficient pen and paper. Fraser is dismissive of anything electrical throughout, stating that part of the beauty of the aforementioned Bulgarian folk singers is that “it’s not microphone music,” and is rather music that could be sung outside. Grant is in accordance, bemoaning how “technology is fucking us,” and how the internet is making music homogenised and lacking in originality. As depressing as it may be, it’s hard to disagree.

As Grant is quizzing Fraser on Blue Bell Knoll’s song titles, he confesses that a friend of his writes a blog entitled ‘Chinese restaurant menu items that sound like titles of Cocteau Twins’ songs.’ He states that his favourite of these is ‘Bitter Gourd Grasping,’ which certainly wouldn’t look out of place on the back of the album, alongside actual titles such as ‘Spooning Good Singing Gum’ and ‘Athol-brose.’ Despite admitting that most of them were written at the 11th hour, she admits that 'A Kissed Out Red Floatboat' is the title with the most emotional resonance to her, which refers to the intense romantic love and openness she was feeling at the time of writing. As well as evoking the blissful, dreamy emotions of newfound love, you could also imagine this title on a Chinese dessert menu.

4. The songwriting process remains mysterious and elusive even to these gifted artists

Keith Richards describes it as catching stars that fall out of the sky; Noel Gallagher says it’s like fishing at a lake; Neil Young claims it’s like approaching a wild animal that you should be careful not to scare away. Whilst the scope of human understanding pushes into the far reaches of space and unravels black holes, the craft of songwriting remains a fairly mysterious process. When Grant questions Fraser on how she writes those intricate melodies, she similarly can’t give a specific, matter of fact answer. Instead, she emphasises the importance of getting into the right flow, which involves battling against being too clever, focusing on doing it rather than talking or thinking too much and repelling insecurities that could unhinge one’s free creativity. The analogy she chooses is climbing a ladder, with the bottom and the top being melodic sounds, and climbing the rungs being the songwriting process. Grant concurs, stating that songs “just come out of you.” He even suggests that Fraser’s lack of music theory knowledge and her inability to read music could be why her songs sound so free and natural.

5. A collaboration could be on the cards one day, but don’t hold your breath

The last question of the night was fired by one audacious audience member who asked if they would ever duet, even asking for “a few notes” right there on stage, which Grant instantly laughed off. Given the evident mutual admiration that flowed between them on stage, and how they seem to be drawn to similar words and sounds, it’s perhaps surprising that these artists have never been in the studio together. However, whilst they may be the right pairing for a collaboration, the timings of their respective careers have perhaps been against them. Fraser has not released any new music since 2009, even claiming that she’s been in “a spiritual crisis” in regards to her music career since Blue Bell Knoll, whilst Grant did not gain prominence as a solo artist until 2010. Understandably, Grant remained coy and cautious, considering Fraser is one of his heroes, and emphasised that he would only be open to it if they had a good idea to explore that felt natural. Although she remained similarly guarded, Fraser responded by claiming “He doesn’t need to convince me!” Grant closed the evening fittingly, stating that “Stranger things have happened, right?”