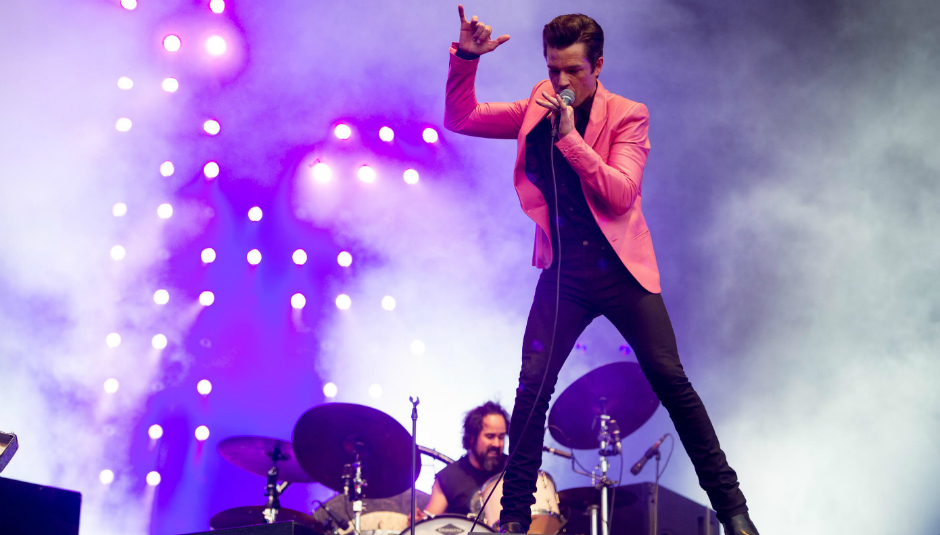 Various transportation issues – including an hour on the tube that reached temperatures that should definitely be illegal – mean that stress levels are a little high as I walk into Hyde Park for British Summer Time. Having heard various horror stories regarding queue sizes and waiting times at previous editions, I’m a little nervous, but manage to get in and cross over the sea of picnic blankets in time to watch Mew perform Comforting Sounds. This is only made possible by the slick organisation of the event; the security staff are thorough but efficient, something repeated across the site. I don’t wait longer than five minutes for a beer at any point, which is impressive given there are 65,000 people milling around.

Not many are watching Mew, and of those that are, only a handful seem to know what Comforting Sounds is. The brilliance of the track and the relief that I’ve actually made it there in time to see it quickly grabs me out of my stupor and into nearly nine minutes of pure bliss. Some cider is purchased – £5 per pint, by the way – and we wait for Elbow.

First though, we’ve got Tears For Fears, who open with ‘Everybody Wants To Rule The World’. It all seems a little middle of the road for me, but then I look around at the fans and people seem keen; the band is quite an astute booking in that respect. Of course, many could argue that The Killers and Elbow aren’t exactly on the cutting edge of innovation either, but they make up for it with loads of energy and beautiful lyricism respectively. Tears For Fears sadly have neither of those things and by the time they’ve covered Creep we’re off in search for another £5 pint.

The sun is blazing, and Elbow are pretty exceptional in this kind of setting. Their setlist is lacking those rare moments such as ‘Station Approach’ and ‘Any Day Now’ that would make it extra special, but tracks like ‘Bones Of You’ and ‘Lippy Kids’ are among their very best. Garvey is in his usual chatty mood, inspiring a reverse Mexican wave in the crowd and generally being affable. ‘One Day Like This’ has been relegated from set-closer these days, with the excellent ‘Grounds For Divorce’ taking that slot. Either way, it’s another inspired booking and there are few better than Elbow at warming up a crowd.

The Killers open their set with ‘The Man’ which draws a muted response before ‘Somebody Told Me’ starts things properly. From there, it’s their usual greatest hits set and draws heavily from Hot Fuss and Sam’s Town. ‘Spaceman’, from their third album, comes early in the set and it’s here I begin to notice a problem that’s been mentioned many times before.

The sound at Hyde Park is too quiet. It’s not remotely up for debate, and I know there are reasons around why it has to be that way, but then maybe the answer is to find a new site. It doesn’t ruin the gig but means that tracks you’re less familiar with are harder to get into, and tracks you know are drowned out by people singing along.

Luckily, the likes of ‘Read My Mind’ and ‘Dustland Fairytale’ are fantastic enough that the sound can be overlooked to an extent, as can the fact that The Killers will probably be playing a very similar set in ten years time. There’s a reason they’re the only band to sell out their night for BST, and it’s heard in the brilliance of tracks like ‘Jenny Was A Friend Of Mine’ and ‘For Reasons Unknown’.

‘All These Things That I’ve Done’ closes the main set as is the norm, and it sparks the usual singalong. ‘This is Your Life’ and ‘Shot At The Night’ are strange choices to open the encore, but there’s no denying the adrenaline rush of ‘When You Were Young’ and ‘Mr. Brightside’ to finish things off.

And that’s it, done and dusted by 10.20pm because God forbid anyone who lives nearby get wound up. We’re out quickly and it’s a last reminder of how well run the event is. The Killers were reliably strong and probably the perfect band for this sort of gig. The acts earlier in the day were great too. But I’d rather see them all somewhere other than Hyde Park next time.

"Places should be accessible for ever...