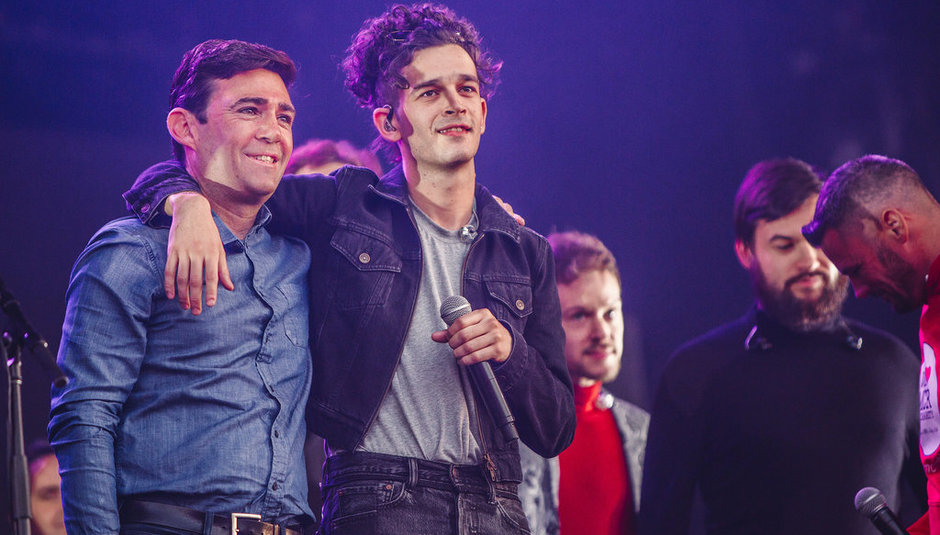 The buildup to this year’s Parklife Festival felt more fraught than usual; between the fallout from the terrorist attack at Manchester Arena just a few weeks earlier and the very real possibility that the weekend might have ended up without one of its two headliners at very short notice, there was a sense that perhaps, after finally having settled into its new Heaton Park home, things might go less smoothly than they had for the past couple of years. Even if the late addition of Run the Jewels to the main stage lineup as a de facto replacement for the injury-stricken A Tribe Called Quest seemed like a good omen, the fact remained that Frank Ocean, who was due to top the bill on Sunday, was dropping out of other festivals - including Barcelona’s Primavera Sound in late May - at an alarming rate.

Security was tightened and the weather was changeable to put mildly, with wind and rain lashing the site for spells on Saturday, but otherwise, Parklife felt like a triumph in the face of adversity. Its biggest strength always did lie in the sheer diversity of the artists booked and this year was no exception. Across eight stages, the Saturday brought highlights like a storming mid-afternoon set from Jagwar Ma on the Sounds of the Near Future stage, with the Australians leaning heavily on last year’s second LP, Every Now & Then, and injecting a new sense of urgency into their psych dance jams, to endearingly chaotic effect. That same stage - curated by local promoters extraordinaire Now Wave in continuation of their long-running relationship with the festival - also hosts a rare solo live set from Floating Points, who balances glacial minimalism with thumping beats to stirring effect.

Elsewhere, there’s a main stage legends slot that is quickly becoming Parklife’s answer to the traditional Sunday afternoon set on the Pyramid Stage at Glastonbury - this year, it’s filled by Chaka Khan, who is evidently not doing things by halves based on the size of her ten-piece live band. With no new record to plug, we instead get a greatest hits set that culminates in huge singalongs for both ‘I’m Every Woman’ and an extended ‘Ain’t Nobody’. She’s followed by a big-hitting Radio 1 hat-trick, with George Ezra road-testing a clutch of new tracks from his as-yet-untitled second LP, expected later this year, as well as igniting a hefty crowd with ‘Budapest’ and ‘Did You Hear the Rain?’ from 2014’s Wanted on Voyage. Two Door Cinema Club, meanwhile, play second from top and front-load their set with fan favourites from their 2010 debut, Tourist History, including an opening salvo of ‘Undercover Martyn’, ‘Something Good Can Work’ and ‘What You Know’. That album forms the crux of a set that’s mercifully light on cuts from last year’s muddled third record, Gameshow.

Members of the press had been tipped off in advance that The 1975’s headlining set would be preceded by something special, and the organisers duly delivered; it was then that they took the opportunity to address the Arena bombing by bringing out first responders from across the emergency services who were on the scene that night, along with the new mayor of Greater Manchester, Andy Burnham. He paid poignant tribute to the victims, those who helped and the resilience of the city, before introducing the band’s frontman, Matty Healy, to lead the crowd in a minute of noise - acknowledging that the time for solemn silence had passed. It was a classy touch, but more importantly, symbolised the sense that perhaps, slowly, things are beginning to get back to normal in the area.

Quickly afterwards, Healy returned with his bandmates in tow to the strains of the current version of their self-titled track for what will be one of the last times. The group are winding down their promotion of last year’s spectacular I like it when you sleep, for you are so beautiful yet so unaware of it, and will soon retreat to the studio to put the finishing touches on next year’s follow-up, Music for Cars. Still, album number two shares its air time with the band’s self-titled debut, meaning that along with the ambitious festival airing of the ambient instrumental ‘Please Be Naked’, we get a rare recent outing for early single ‘The City’, too. Long-time fans are well catered for, and even get a new spin on an old favourite when they close out ‘Robbers’ with a snippet of the Shadow Child remix, perhaps as a nod to the festival’s grounding in dance music. The standout, though, is an anthemic version of ‘Loving Someone’ that couldn’t have felt more timely.

On Sunday, the Sounds of the Near Future tent sees a stunning turn from Sampha, who’s currently riding high on the wave of critical acclaim for his long-awaited first record, February’s Process. Finally stepping out on his own after so long collaborating with and remixing his contemporaries, he runs through much of the album, opening with a never-more-mellow ‘Timmy’s Prayer’. He’s stripped things back live, behind his keyboard for most of the set and with drums only employed on certain tracks, but it suits him to have his remarkable voice very much front and centre.

Hip hop fans who were disappointed at the news that Q-Tip needed urgent shoulder surgery, meanwhile, will have been sated when the Tribe were swapped out for the hottest rap duo of the moment, Run the Jewels. Backed by DJ Trackstar on the ones and twos, Killer Mike and El-P dedicate most of their hour on stage to a viscerally energetic run through cuts from December’s Run the Jewels 3, including manic renditions of ‘Talk to Me’, ‘Legend Has It’ and ‘Call Ticketron’. The latter’s assertion that the pair may shortly make it to a sold-out Madison Square Garden in their own right might not be too ambitious when they’re on this sort of form, and the decision to close things out with the measured ‘Down’ proves that they’re genuinely multi-faceted, too.

And then, the question that had hung like a raincloud over the site all weekend was finally to be answered. Will he? Won’t he? On paper, Ocean’s return to the stage that past Friday at Denmark’s Northside Festival boded well, but half an hour past his allotted stage time on Sunday evening, he’d still to show up, and you might have been forgiven for fearing the worst. Eventually, he emerges, and heads straight down a catwalk to a smaller B-stage in the centre of the crowd, where he’ll remain all evening. There’s a stack of speakers there, and a pair of headphones plugged into them that he wears throughout. There’s evident nerves, too - he opens with ‘Solo’, but only gets it right at the third attempt, and similarly, he has to re-start ‘Chanel’, too, in a manner that betrays the perfectionism he’s notorious for. Meanwhile, the main stage is effectively used for little other than a huge backdrop to the smaller one he’s sitting on, with smartphone-style footage of Ocean projected onto it.

Musically, the set picks up, and once Ocean relaxes, you can feel the crowd do likewise. There’s something disarmingly casual about his approach that speaks to the intimacy of his music; that was something he was always going to have to be able to put across from the stage, and he manages it. He’s seated form start to finish, and as fine as the line can be between low-key and low-energy, he stays the right side of it on a devastating double whammy of ‘Good Guy’ and ‘Self Control’, as well as a gorgeous take on The Jackson 5’s ‘Never Can Say Goodbye’. A clutch of session musicians join him at the midpoint, and the overall impression is one of a few mates sitting around jamming and enjoying each other’s company. He saves the Blonde highlights for last - ‘Pink + White’ and ‘Nikes’ included, but by then, he’s already sealed success - he was vindicated in his decision to hold off a live return until he could not just get it right, but get it quite this right.